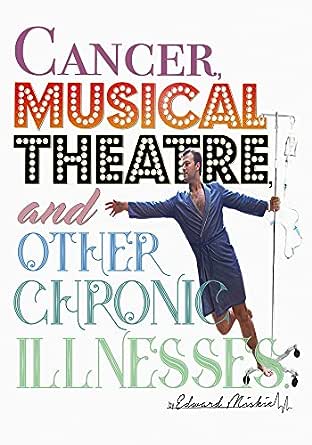 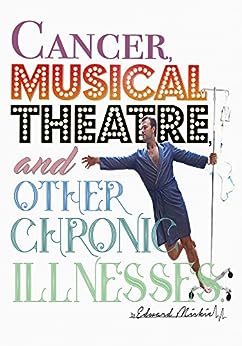 Cancer, Musical Theatre, and Other Chronic Illnesses illustrates the life and after-treatment-survivor-life of Edward Miskie, a cancer survivor, through anecdotal shenanigans, triumph, and heartbreak.
click to open popover

Grady Harp
5.0 out of 5 stars ‘Everyone has a thing that saves them; pulls them out of the hole of you have fallen into. Mine is Musical Theatre.’
25 April 2017 - Published on Amazon.com
Verified Purchase
New York City author Edward Miskie is a musical theatre actor, calendar model, singer and cancer survivor (Non-Hodgkin’s Lymphoma). A chance encounter with a fellow survivor prompted him to begin writing his "as-funny-as-cancer-can-be memoir." A course of treatment at Memorial Sloan Kettering Cancer Center provided the inspiration for the book, which was written four years after he was declared cancer free. Having always known he wanted to give back to those who supported him, not only throughout the course of his lifetime, but his course of treatment at Memorial Sloan Kettering Cancer Center, Edward soon took to his laptop and began forming this memoir. Originally, he identified this piece as a self-help book for cancer patients, survivors, and those closely associated with the two. Since, it has morphed into what he refers to as 'the ugly truth' behind cancer. The book touches on the farce that is cancer treatment, the circus that is the healthcare system we face, and the challenges that face you even after you are told you are cancer free all framed in the content of musicals. Edward’s goal? To encourage us through the indecencies, heartbreaks, triumphs, and shenanigans to find some form of peace in knowing that it's okay to feel the way they do, and they are not alone.

Some authors of experience find difficulty in writing a memoir cum guidance support book a daunting task. Edward’s gift is his light hearted, honest, plain truths – a feeling we find especially true in his extraordinary Prologue: ‘Cancer is really f***king terrible. I think we can all agree on some level that we know that. We have all seen, on either stage or screen, how Cancer is portrayed; bald, and skinny with no appetite, tired. Mostly, that is all true... ish. My fellow patients/ survivors understand. We know that the surface of all of this patient business is just that, surface, but we don't stop being human; we don't stop feeling, needing, wanting. Maybe those of you who have watched someone go through treatment can elaborate on those elements a little bit more, but there is so much more to being hairless and depleted than that. There is so much more to being a slave to a hospital, treatments, and a medical schedule that isn't touched upon or conveyed by the physical ailments that are the outwards signs of being a Cancer patient. I'm going to convey those to you. I'm going to take what you already know, the basics, and put them under a microscope for your understanding. I'm going to talk about the things that Cancer patients don't want you to know about; the reasons they wear hats, and wigs, and sparkly outfits, or whatever, and pretend that they're okay while you're around. After I do that, I'm going to talk to you about what you definitely don't know, or haven't considered. Once the tight hand of hospitals, doctors, and treatments loosens up a little, or lets go entirely, you start to realize that that hand was a actually support system, a back bone, a structure. In a sick way, you need it. Once it's gone you sort of fall apart into a blob of uncertainty, fawning for an appointment, almost anticipating something to go horribly wrong so you have something stark and clear to do amongst the question marks. The process of letting that need go is a hurdle in and of itself, and then your life after treatment begins, but it's almost as hard as treatment itself. In short, one starts out as a whole person, the person you are, or were, then you are ripped away from that life, hooked up to machines and tubes for days and months at a time, and forced into this codependent professional patient lifestyle. Once you're given the 'all clear' and released, you're heartlessly sent back out into the world; set free, and the real work, the real repair, and recovery begins with no clear start point or guideline of what to do. Then the questions begin.’

Reading CANCER, MUSICAL THEATER AND OTHER CHRONIC ILLNESSES is a joy, not only because of the quality of writing but also the tone of the message. The only appropriate response to his accomplishment is a round of raucous applause and shouts of Bravo! Highly recommended. Grady Harp, April 17

This book is free on Kindle Unlimited

Cher Marie
5.0 out of 5 stars READ ME SEYMOUR....
2 August 2017 - Published on Amazon.com
Verified Purchase
"Just read the book and write an honest review."

This is what the author of this book, Ed Miskie, told me recently when I admitted that I only read the first chapter before I sobbed, put it down, and refused to pick it up again. It’s almost as if to say, "Hey, if I don’t read it then this whole cancer thing never happened to you….” Not to mention that the LAST thing someone wants to do is read about how someone they know, admire, and consider a friend, had to suffer. Even though, spoiler alert, Ed managed to make cancer his b word and now looks better then ever, it’s still hard to flip through pages reading about the pain he endured…the pain that not only his tumor named Seymour gave him, but the pain from the process…bouncing from doctor to doctor, being told the wrong information, and almost being turned away b/c he wasn’t a trust fund baby and never won the lottery.

The moment after I was given the side eye and told to stop being a girl and read the book already, I went home and did just that…cover to cover..in one sitting…tissues in hand. (That’s what an easy read it is btw… ) All of a sudden.. it hit me…wait…during this whole ordeal…. I saw Ed…we hung out…even went to Medieval Times. I mean.. I know he was sick -he had told me-but when we were together there was never a mention of it or slightest sign of struggle. If you didn’t know you wouldn’t have known.. that’s how much of a superhero he was (and still is) I mean only DAYS before a lengthy and agonizing hospital stay, Ed was his normal, funny, social butterfly self - at FUDGING Medieval Times of all places! Who does that?

The point is ….you NEVER know what someone is REALLY going through. Even if there's a smile on the face of a friend, relative, or just your latest one night stand, you NEVER know what’s really behind the curtain. So whether you've conquered cancer yourself, currently in the midst of battle, know someone who has done either, or are just a curious creature, this book is a MUST READ. It’s a TRULY HONEST account…no sugarcoating AT ALL, of what it takes to fight the beast....all while still trying to survive in society, maintain a job, date, and not get knocked down by an NYC tourist in search of the perfect Instagram picture. It’s also a LOVE story about how family, friendships, and a teddy bear can be more powerful than even strongest of pain meds.

Also…this book is funny. REALLY funny. How can cancer be funny you ask? Well you’ll have to read and see! Ed’s got a quick wit and the sharpest comebacks of anyone in New York City, and this book proves it. Did he REALLY call his doctor that? Holy crap, YES HE DID. He did really just describe in detail about how cancer is linked to his "you know what"? You’d better believe it.

Finally the star of this book might not be the author, or even cancer itself. It’s about musical theater and how Ed’s love of Broadway helped him get the top billing in life. There are so many show tune references, that while you are reading about death, you’ll find yourself singing the entire score of CATS, secretly (or not so much) yearning to wear something covered in glitter or sequins, and wanting to audition for your local production of Grease. Quite frankly it’s these references , jokes, and comparisons that set this book apart from the other big C books on the shelves.

So go get this book, I dare you. Read it on the subway, or in the bathtub…or while waiting in a doctors office for those dreaded test results…and smile at the fact that- at that moment-you are still breathing and every day is awesome…even if a rain cloud is in sight. Then go tell your best friend, family, pets, and stuffed animals how much you love them and how much you support them…..and if they EVER write a book…just read it and write a fudging review already.
Read more

Michael McAssey
5.0 out of 5 stars A MUST READ!
1 May 2017 - Published on Amazon.com
Verified Purchase
I wasn't sure what I was getting myself into when I bought this book. But I have to admit that I read the ENTIRE thing in one sitting. I couldn't put it down. The confusion and frustration of the author in his search for diagnosis and, most of all, GETTING WELL is awe-inspiring. It could happen to ANY of us. On top of that, the use of Musical Theatre titles and character names to disguise the actual people was nothing short of BRILLIANT. (And no, you don't have to know a THING about Musical Theatre to get the story, but if you DO, it makes it all the more delicious.) Brava!
Read more
One person found this helpful

nancy Favazza
5.0 out of 5 stars A must read for cancer patients and healthcare professionals
24 September 2018 - Published on Amazon.com
This book was awesome! It totally captured all of the feelings and emotions of a cancer patient. I could totally relate. I cried and I laughed right there with you.........reliving my own experience in a positive way.........understanding that I wasn't alone in my feelings. The pizza party was classic and I love you for your persistence with the hospital staff. I think its a book that all hospital staff should be required to read and a great read for anyone who has been diagnosed with this sucky disease!
Read more
Go to Amazon.com to see all 8 reviews 5.0 out of 5 stars
Get FREE delivery with Amazon Prime
Prime members enjoy FREE Delivery and exclusive access to movies, TV shows, music, Kindle e-books, Twitch Prime, and more.
> Get Started
Back to top
Get to Know Us
Make Money with Us
Let Us Help You
And don't forget:
© 1996-2020, Amazon.com, Inc. or its affiliates