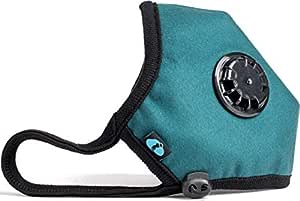 The Cambridge Mask uses military grade filtration technology to filter out nearly 100% of particulate pollution, gases, as well as bacteria and viruses in a fashion friendly mask suitable for the whole family. This is the British Pollution Solution. Independently Tested The filters used in Cambridge Mask meet the N99 standard (higher than N95). This is a US Government specification for pollution masks. Cambridge Masks have been independently tested by Nelson Labs, USA which confirmed almost 100% of particulate pollution, bacteria and viruses were removed when tested. We have also tested to meet the standards for Chinese NK-95 and Korean Food and Drug Administration requirements. The masks use a triple-layer filter system which will protect from a range of airborne contaminants. What does the Cambridge Mask filter? Almost 100% of Particulate Matter (PM) including PM10, PM2.5 and PM0.3. These are the sort of particles you find in coal dust from power stations, diesel exhaust fumes, factory emissions and from construction works. Almost 100% of gas based air pollution, including odours such as Volatile Organic Compounds (VOCs), Ozone, Benzathine, and Formaldehyde. These particulates you can find in petrol fumes, chemical emissions and from many industrial processes. Almost 100% of harmful pathogens such as viruses and bacteria. Other airborne irritants or allergens such as Dust, mould spores, some odours, pet allergens and pollen. Who is the Cambridge Mask for? Anyone exposed to urban environments with high air pollution levels. People in at risk groups for respiratory disease, including children, elderly, pregnant women and those with existing respiratory conditions. Asthmatics and allergy sufferers including Hay Fever. Hobbyists and DIY such as woodworking and sanding. Anyone travelling to regions known for poor air quality such as China and India. Anyone seeking protection for airborne irritants such as Dust and mould.

Raelene
5.0 out of 5 stars Comfortable, pretty, excellent service
26 November 2019
Colour: 65 Roses - Limited EditionSize: M: 150x190mm, 33 – 64kg (Adult)Verified Purchase
Just received the mask, so I can only comment on comfort and customer service so far. It is hot here, and I usually can’t stand anything that restricts my breathing. The valve does a great job of allowing the hot air out - no claustrophobic feeling. I bought on measurements, and the fit is very comfortable and unexpectedly looks nice. I bought the 65 roses pattern and it is pretty. I have never worn a non-disposable mask before and I am surprised at how wearable this is. The customer service is superb. I live in Australia and had a detailed response to a query within seconds from the UK. Although my intention was to wear this in Kathmandu, the air quality in Brisbane was beyond hazardous recently due to massive bushfires and dust. The need for these masks is bound to increase here in Australia. Thank you for a great product.
Read more
4 people found this helpful
Helpful
Comment Report abuse

Tanya Parsons
5.0 out of 5 stars It works!
23 November 2019
Colour: The WatsonSize: M: 150x190mm, 33 – 64kg (Adult)Verified Purchase
I'm an asthmatic and have been stuck inside due to bushfire smoke. This enabled me to go out!
Read more
6 people found this helpful
Helpful
Comment Report abuse

Van R
5.0 out of 5 stars It does its job very well!
23 December 2019
Colour: The WatsonSize: L: 170x200mm, 65 – 89kg (Adult)Verified Purchase
It works super well considering how thick the smoke have been from the Australian bush fires. Also helped block out all the cigarette stink when I go to the city. Feels amazing to be able to breathe without choking on polluted air. Bought the Large Adult size.

Pros-
* It fitted nicely around my face, great seal and zero glasses fogging
* Cut down a lot on foul odor from the city air and fire smoke

Cons-
* It was kinda awkward wearing my glasses considering it is prone to slipping (but that's easily fixed when I get around to it!)
* Being a hearing implant user, it was very fiddly trying to fit three things on one ear. But that's not the mask's fault. A lot of things don't always take things like this in mind. Something that I can also try to solve so I don't lose my device by accident! So if you're a hearing aid/implant user, do keep this in mind! :D
* It does get very humid underneath the mask from exhaled air, but there isn't really much that can be done about it.

However, the cons is nothing when I need to be able to breathe and not inhale harmful particles. So I really recommend one of these masks if you got the money for it!

Justine Lloyd
5.0 out of 5 stars Great product- helped protect from bush fire smoke
28 December 2019
Colour: 65 Roses - Limited EditionSize: L: 170x200mm, 65 – 89kg (Adult)Verified Purchase
This mask saved me in the midst of the Sydney smoke haze recently. I work outdoors and developed a lung infection and respiratory system issues such as asthma and sore throat and lungs. The Dr said I could not be out in the smoke as would keep inflaming the infection.
Wearing this mask I was able to go back outside, so some work and other chores, & still get better.
It is literally a life saver.
I will be monitoring air pollution from now on and wearing it on poor quality days. It can cause serious health problems
Read more
Helpful
Comment Report abuse

Justice
1.0 out of 5 stars Fail: no protection at all.
5 January 2020
Colour: 65 Roses - Limited EditionSize: XS: 120x135mm, 6-10kg (Child 1.5-4yrs, Valveless)Verified Purchase
This mask has no chance of forming a seal around the face. It has no stretch and is designed to sell rather than work. Sure the filter might be good material, but the air your child breaths doesn't go through the mask, just around it through the gaps between mask edge and skin. Fail. Also it was invited with exhalation valves, but did not come with them. This mask offers absolutely no protection.
Read more
Helpful
Comment Report abuse

Amazon Customer
5.0 out of 5 stars A necessity for bad air
13 December 2019
Colour: The WatsonSize: L: 170x200mm, 65 – 89kg (Adult)Verified Purchase
I've found this mask quite useful, the only things I don't like are around fitting/wearing the mask. It's hard to make it super airtight, and also when riding a bike, the exhaust air seems to travel upwards into my eyes which is super annoying, would be better if it went down.
Read more
Helpful
Comment Report abuse

Vitaly
5.0 out of 5 stars Top quaity product
19 December 2019
Colour: 65 Roses - Limited EditionSize: M: 150x190mm, 33 – 64kg (Adult)Verified Purchase
Manufacturing quality is very good and so is the packaging. It wouldn't hurt to enclose very brief ongoing care instructions (e.g. can be washed, how often) and then point to the website saying more detailed instructions are available from there.
Read more
Helpful
Comment Report abuse
There are 17 customer reviews and 27 customer ratings.
See all 17 customer reviews
Write a customer review
Get FREE delivery with Amazon Prime
Prime members enjoy FREE Delivery and exclusive access to movies, TV shows, music, Kindle e-books, Twitch Prime, and more.
> Get Started
Back to top
Get to Know Us
Make Money with Us
Let Us Help You
And don't forget:
© 1996-2020, Amazon.com, Inc. or its affiliates