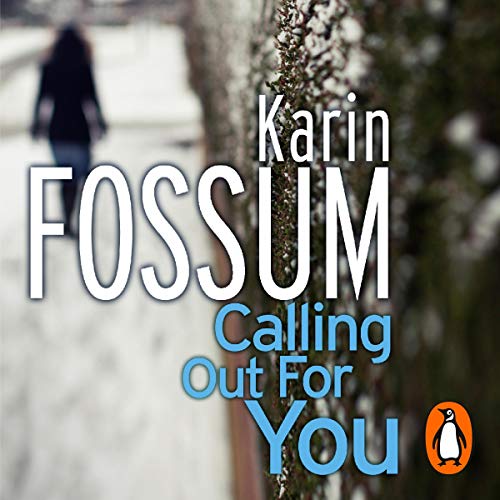 Calling Out for You

4.2 out of 5 stars
4.2 out of 5
73 global ratings
How are ratings calculated?
To calculate the overall star rating and percentage breakdown by star, we don’t use a simple average. Instead, our system considers things like how recent a review is and if the reviewer bought the item on Amazon. It also analyses reviews to verify trustworthiness.

Read and Reviewed
4.0 out of 5 stars An example of how a series of independent occurrences can conspire to wreak havoc & bring unintended victims in a small town.
Reviewed in the United Kingdom on 29 May 2017
Verified Purchase
4.5 stars

This fifth entry in the series featuring Inspector Konrad Sejer and Jacob Skarre and is a slightly more traditional police procedural in contrast to some of the earlier offerings from Karin Fossum. However, in her true style she takes readers on a tumultuous journey to the heart of the small rural town of Elvestad, home to just over two-thousand residents. Calling Out For You appears on outset to bear all the hallmarks of an uplifting love story but is quickly followed by an act of barbaric violence which devastates a small and seemingly peaceful community. Stolid and admittedly rather simple ageing bachelor Gunder Jomann is inspired by a book entitled "People of All Nations" and makes an out of character decision to travel to India to find himself a wife. The dependable agricultural machinery salesman might be balding and considered a little eccentric but it doesn't stop him wanting to find love. His intention in not to find a subservient wife who simply wants a ticket to a richer lifestyle but to find a woman he can adore, cherish and make a life with. His sister, Marie, urges caution but in thirty-eight-year old Poona Bai, a resident of Mumbai, he meets a companion to share his dreams with. Marriage follows and Gunder returns home to await her arrival a fortnight later in late August but the tragic news that his sister has sustained serious injuries after a car accident sees him prevented from collecting his wife from her flight. Gunder enlists the help of fellow resident and taxi-driver Kalle Moe to meet Poona Bai at Gardermoen airport, only for him to fail to locate her before she departs the terminal. As Gunder worries and buries his head in the sand kidding himself of Poona Bai's impending arrival he frets beside the comatose Marie, but the report of the body of a "foreign woman" cruelly murdered just one-thousand-metres from his home is too much for him to withstand. In an act of unparalleled savagery, the woman is found bludgeoned to death in what appears as a frenzied attack inflicting sustained damage, leaving her face unrecognisable. But just who is this woman?

Delays in identifying the woman due to the preponderance of residents keen not to draw the attention of the police is compounded by the inhabitants failure to conceive that a fellow member of their community could have been behind the violent crime. Fossum's expose of the residents of Elvestad and their steadfast refusal to think that a school friend, workmate or relative could have been behind that crime leads to those who have something to report fearing that they may either be implicating neighbours or raising their head above the parapet. Life might seem pleasantly straightforward and honest in the little village of Elvestad but as the rumour mill gains momentum and the witnesses are publicly identified and subsequently ostracised, Sejer and Skarre assiduously pin down the final hours of Poona Bai whilst almost blending into the background of life in the community as the whole town's atmosphere turns a shade darker. As the clock ticks down and a suspect sits across the table from Sejer it is his passionate belief in delivering justice, along with his incredible patience and humanity that sees him steer the case to its conclusion.

The brilliance of this novel is in demonstrating how a series of independent occurrences can conspire to wreak havoc and bring unintended victims. The staggering number of contributing factors which combine to change the lives of an entire and peaceful community is made devastatingly apparent. In the words of the distinguished Inspector Sejer: "There are so many elements. So many incidents which pave the way for evil."

A suitably ambiguous ending leaves the memories rattling around in the conscience of readers and makes for a powerful, yet disturbing story. The lack of a single conclusive piece of evidence, a garbled confession which is later withdrawn and some late night gossip leaves questions abounding about the guilt or innocence of the charged party. Fossum explores the fate of Gunder Jomann both sensitively and compassionately, without the need for overdone histrionics detracting from the raw emotion on show.

Gordon Williams
5.0 out of 5 stars Beautiful But Challenging
Reviewed in the United Kingdom on 1 July 2016
Verified Purchase
A body of a woman with her faced smashed to pulp is found in a field. We know who she is, where she is from, why she is in the vicinity and who she was to meet. But we do not know why she is here exactly and why she has been brutally killed. I have given this remarkable crime novel five stars, yet it is not perfect. The prose and the smoothness of its flow makes reading easy and very relaxed. The extraordinary web of interwoven characters, events and random consequences are a triumph of the imagination. In many ways there is no lead character, rather several key players. Each is perfectly crafted.
The story is both tragic and uplifting. The only problem is the ambiguous ending. It may spoil it for some. I cannot say with certainty that it did not spoil it for me. But then as a reader one should rise to the level of the storyteller, not cling to the security of one's own comfort zone.
Read more
Report abuse

Christina
4.0 out of 5 stars A very good read, with human warmth and atmosphere
Reviewed in the United Kingdom on 1 March 2019
Verified Purchase
The human story is excellent, the characterisation very good, as a reader you really care for the people involved, though the ending seems a bit flat and not in anyway conclusive - is there a follow up, I wonder? Worth reading if you are after a good human story, not great if you are mainly after a well rounded thriller with a satisfying end.
Read more
Report abuse

booklover
4.0 out of 5 stars The ending was a little disappointing...
Reviewed in the United Kingdom on 18 January 2015
Verified Purchase
I really enjoy Karin Fossum's novels because of her characters, they are very well thought out and I read it in a few days. The ending was a little disappointing, we learn the truth but in a mundane way and i was left wondering, not sure if it was intentional to make you think or just a bit flat!
Read more
3 people found this helpful
Report abuse

Al
4.0 out of 5 stars Thoughtful crime fiction
Reviewed in the United Kingdom on 8 April 2016
Verified Purchase
A slightly different example of Nordic Noir - set in a small Norwegian community - with a real sympathy for the ordinary people caught up in extraordinary events. Although the cover quotes Jo Nesbo, this is more like a Norwegian Wallander
Read more
One person found this helpful
Report abuse
See all reviews
Back to top
Get to Know Us
Make Money with Us
Let Us Help You
And don't forget:
© 1996-2021, Amazon.com, Inc. or its affiliates