Temporarily out of stock.
Order now and we'll deliver when available. We'll e-mail you with an estimated delivery date as soon as we have more information. Your account will only be charged when we ship the item.
Delivery Rates and Return policy
Added
Not added
Add to Cart
$163.39
& FREE Delivery
Sold by: Near Fine_Books
Sold by: Near Fine_Books 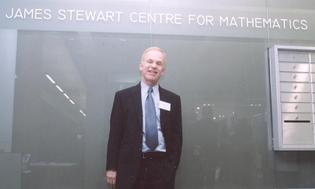 by James Stewart (Author)
4.6 out of 5 stars 138 ratings
Edition: 5th
See all formats and editions
Sorry, there was a problem loading this page. Try again.

Stewart's "Calculus, Fifth Edition" has the mathematical precision, accuracy, clarity of exposition and outstanding examples and problem sets that have characterized the first four editions. Stewart retains the focus on problem solving and the pedagogical system that has made the book a favorite of students and instructors in a wide variety of colleges and universities throughout the world.In this Fifth Edition, he has made hundreds of small improvements: new examples, additional steps in existing examples, updating of data in existing examples and exercises, new phrases and margin notes to clarify the exposition, references to other sources and web sites, redrawn art, and references to the TEC CD (Tools for Enriching Calculus). These refinements ensure that students and instructors have the best materials available. The number of pages in the book, however, remains unchanged from the 4th edition. Further support for students and instructors is now available through a vast array of supplementary material.
Read more
Previous page
Next page

Money with Jess: Your Ultimate Guide to Household Budgeting
Learn how to get money, how to spend it and how to save it. Shop now
Tell the Publisher!
I’d like to read this book on Kindle

James Stewart received the M.S. degree from Stanford University and the Ph.D. from the University of Toronto. After two years as a postdoctoral fellow at the University of London, he became Professor of Mathematics at McMaster University. His research has been in harmonic analysis and functional analysis. Stewart’s books include a series of high school textbooks as well as a best-selling series of calculus textbooks. He is also co-author, with Lothar Redlin and Saleem Watson, of a series of college algebra and precalculus textbooks. Translations of his books include those in Spanish, Portuguese, French, Italian, Korean, Chinese, Greek, and Indonesian.

A talented violinst, Stewart was concertmaster of the McMaster Symphony Orchestra for many years and played professionally in the Hamilton Philharmonic Orchestra. Having explored connections between music and mathematics, Stewart has given more than 20 talks worldwide on Mathematics and Music and is planning to write a book that attempts to explain why mathematicians tend to be musical.

4.6 out of 5 stars
4.6 out of 5
138 global ratings
How are ratings calculated?
To calculate the overall star rating and percentage breakdown by star, we don’t use a simple average. Instead, our system considers things like how recent a review is and if the reviewer bought the item on Amazon. It also analyses reviews to verify trustworthiness.

Tahir
4.0 out of 5 stars 👍
Reviewed in India on 27 February 2020
Verified Purchase
Written in simple language, not like other books which starts problems with only introduction.. U can learn from basic to master... I have given 4 stars bcz of the price.. It's 5000 rupees(70$)
Read more

Tahir
4.0 out of 5 stars 👍
Reviewed in India on 27 February 2020
Written in simple language, not like other books which starts problems with only introduction.. U can learn from basic to master... I have given 4 stars bcz of the price.. It's 5000 rupees(70$)
Images in this review

Prasoon Tiwari
4.0 out of 5 stars Great book but...
Reviewed in India on 5 May 2019
Verified Purchase
It is great book but it arrived as if it was used (no writing inside the book)
Read more
Report abuse

Poonam Dhillon
5.0 out of 5 stars A through, well-written book
Reviewed in India on 24 July 2020
Verified Purchase
I bought this book to self study calc as I hadn't at high school
Read more
Report abuse

Maximus
5.0 out of 5 stars I absolutely LOVE the textbook! One of the BEST Calculus textbooks!
Reviewed in the United States on 6 June 2018
Verified Purchase
I have purchased this textbook last year for my class. Unfortunately, I was not able to take the course until this summer. The book is wonderful in terms of material and mathematical knowledge that it gives and techniques that it teaches. One can practically use this book to learn everything an undergraduate mathematics student needs to know. It is that good! James Stewart, the author of the book, gives the best way to learn Calculus with introduction to material in each chapter with examples and problems in between paragraphs. This is perhaps the best way to self-teach yourself the mathematics required for college and prepare for each class, and that is exactly how this textbook helped me before I started the summer course.
Read more
4 people found this helpful
Report abuse

Amazon Customer
5.0 out of 5 stars layout of the content
Reviewed in the United States on 22 February 2021
Verified Purchase
I treasure this specific textbook by James Stewart as it is very comprehensive and easy to follow. There are 1204 pages and A-B Appendices. There are a total of 18 chapters. If you are a student needing a great reference in Calculus from basic to advanced (differential equations), then this is the book to buy.
Read more
2 people found this helpful
Report abuse
See all reviews