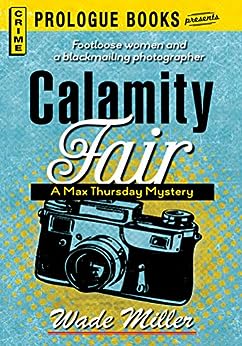 The fourth Max Thursday novel, and the second for me, this book was considerably better than FATAL STEP, which was also pretty good.

The set-up is pretty standard- Max Thursday is hired by a mysterious woman to recover some gambling IOUs " Quite a good deal. A thousand dollars." (snort). When he gets on the trail of George Papago, the club owner who held the IOUs, he follows him through eleven bars, and winds up with his smashed and bloody panama hat in his front seat. Things are starting to get noirish:

"... It was considerably out of his way going home, but he drove out to 30th Street where the whitewashed ice-cream cone loomed ghostly against the night sky. Meticulously and silently, Thursday hung Papago’s smashed panama on the front doorknob. Then he went home to wait for the next move."

Now reading PI novels, like certain other activities, can seem at times like going through the motions. Still, even when it's humdrum, it's still pretty good. When it's better than humdrum, it's amazing. I thought Calamity Fair was amazing. The dialogue was very snappy, for one thing. Take Thursday and the cops at the alligator farm (yes, an alligator farm- another nice touch):

As the three detectives walked by, some of the foot-long alligator pups set up a yapping noise and floundered into the water. Thursday nudged Crane and pointed at a glass display case of alligator wallets, belts, purses, and watch straps. “From the cradle to the grave.”
“Probably buy them ready-made,” Crane said. “Ever try to skin an alligator?”
“No. And don’t tell me you have.”
The place was deserted. Clapp was already shoving his way through the reluctant turnstile. Fifty yards down the path that rambled through the walled grounds, Thursday could see a knot of men, some uniformed.

And as the plot gets a little more complicated, and more characters are introduced, Wade and Miller just keep doing scene after scene with such panache, that this seemingly standard fare becomes an absolute treat. Quincy Day, the femme fatale, is particularly well drawn. Here she is having breakfast on the terrace with Thursday:

"... Your appeal isn’t sex, at least not in one hammer blow like other women that have your—well, vitality. You spread yours out, surround the object.”
“Like a spider? Max, I hate spiders! But tell me more.”
“More like quicksand. [...]That’s your weapon—that illusion of comfort. The idea that you’ll be around forever. What adds the spice is that anybody can tell the whole effect is a wonderful lie. You’re ready to vanish.”
She smiled complacently over her cup. “Most of that was very nice, Max, and I thank you. Your coffee’s getting cold, though.”
“Yeah.” He twined the necktie around his fist and wadded it into his pocket and had a drink of coffee. He added thoughtfully, “It’s a shame to destroy a work of art like you. Which I will.”

Aknedn
4.0 out of 5 stars Calamity Fair
Reviewed in the United States on 16 October 2012
Verified Purchase
PI Thursday tangles with murder and a blackmail ring, but he is boxed in when he protects his client. Return characters Clapp and DA Benedict add to the plot. Interesting characters and a fast-paced plot. Highly recommended.
Read more
Report abuse

wndjmr
4.0 out of 5 stars Max Thursday.. fun reading.
Reviewed in the United States on 14 July 2014
Verified Purchase
Nice action, nice characters and good use of 40's San Diego.
Read more
Report abuse
See all reviews
Back to top
Get to Know Us
Make Money with Us
Let Us Help You
And don't forget:
© 1996-2021, Amazon.com, Inc. or its affiliates