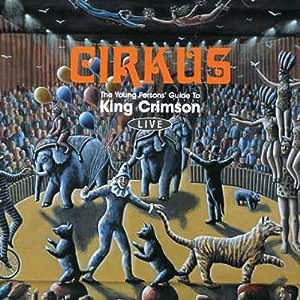 CIRKUS - originally issued in 1999 as a 30th anniversary celebration of the group's live output 0 offers an effective introduction to Crimson as a touring outfit. From the Fillmore West in San Francisco in 1969, via the Concertbouw Amsterdam in 1973, to the Spectrum Montreal in 1984. And on to Nakano Sun Plaza Tokyo in 1995, all eras of Crimson are represented and a variety of the band's most enduring music is featured. Crimson live has always been a very different beast in the concert hall compared to the studio recordings and CIRKUS reflects this.

Daniel Fournier
4.0 out of 5 stars great concept
Reviewed in Canada on 21 April 2009
Verified Purchase
I am a super big fan of KC, the reason I gave it a four is that is we get no new songs or anything new really, now, what I find great is that robert fripp had that idea to put a number of formation of the band and it really make you feel as you would listen to a concert that the formation would come in and out of the stage, the sound is great, and if you don't know the song , it is a good one to get the sound is really good for the different time and I don't regret buying it. if you have all the song already not much point or if you are a hard cor fan like me you may try it
Read more
Helpful
Sending feedback...
Thank you for your feedback.
Sorry, we failed to record your vote. Please try again
Report abuse

Amazon Customer
5.0 out of 5 stars Five Stars
Reviewed in the United Kingdom on 14 September 2016
Verified Purchase
Very cheap price and thanks for a speedy delivery
Read more
Helpful
Sending feedback...
Thank you for your feedback.
Sorry, we failed to record your vote. Please try again
Report abuse

Snow Leopard
4.0 out of 5 stars A Young Person's Guide to King Crimson Live
Reviewed in the United States on 26 November 2002
Verified Purchase
In one respect, you could file this under shameless self-indulgence (a collected scattering of live performances from across the band's career disingenuously organized as if two complete concerts), but on the other hand, King Crimson has always been a live band par excellence and there are always joys to be found in yet another rendition of familiar Crimson songs.
The first disc consists entirely of post-80 band(s) material, except for "Red", which hails from the last 70s Crimson album. For those familiar with this music, the songs largely comprise a kind of greatest hits for the era, but they also serve well as introductions for newcomers.
The second disc features pre-80s band(s) material, though not always performed by members from that era. Fripp gets the concert-obligatory "21st Century Schizoid Man" (performed by the 1972 lineup) out of the way immediately with the first track, with saxophone included to put a new spin on it. "Ladies of the Road" (from 1972 also), and from 1969 "A Man, A City" and "In the Court of the Crimson King" survey some of the earliest aspects of King Crimson (not my favorite stuff really, but solid enough anyway).
The next four songs showcase what is often regarded as the best King Crimson lineup (of Fripp, Wetton and Bruford, with David Cross on violin and Jamie Muir on percussion). "Easy Money", a concert staple of the time, is hammered out with typical authority, and "Fracture" (perhaps Fripp's best composition ever) is always a treat to hear live. If you are interested in getting this disk for the lone improvisation on it, don't. It is only 1'33" long, and is simply a (not entirely uninteresting) maunder to introduce "The Talking Drum."
Fans of the 74 lineup know that there are many performances of "The Talking Drum" (which on the original album and in concerts live) immediately segues into "Larks' Tongues in Aspic II". There is no exception here, except that the version of Larks' into which "The Talking Drum" segues is performed 22 years later by an entirely different lineup. It is Fripp's way, I think, of indicating conceptual continuity in the band. It seems equally likely that, ever since the unexpected popularity of "21st Century Schizoid Man," that Robert Fripp has been trying to shake that song as the band's defining one. In its place he'd rather have the diptych of "The Talking Drum" and "Larks' Tongues in Aspic II," considering how many live versions of it he's released.
After the studio trickery of knitting together two songs across two decades of time, "Cirkus" closes with that other epic from the 1974 era, "Starless". Were it not for the too-stuntlike octuple speed repetition of my favorite Robert Fripp riff ever (the moody slow section of the song), as well as the horrible saxophone solo on the studio version (that is mercifully absent from all live versions), this song might well be King Crimson's finest moment. As it is, it is way up there, not the least of which for featuring John Wetton at his vocal best. Detailmongers may get a kick out of the variant lyrics here (that were later revised for the studio version). Overall the song makes a fittingly epic end to the side and the album.
Personally, I'd rather have full concerts than selections from many, hence my giving this a 4, but as collections go, it is very solid for what it is. Another minor annoyance is the fact that 10 of the songs here have been released in other King Crimson compilations (specifically "Absent Lovers", ProjeKct One and Two, "Epitaph", "The Night Watch" and "The Great Deceiver"). Acquiring all these songs individually would require more ..., so it's a deal to get them here (albeit as teasers for spending more money), but considering the amount of archival material Fripp must still have, it'd've been even cooler had he pulled out some true, not-destined-to-be-released rarities for inclusion.

scott sadler
5.0 out of 5 stars All Hail the Crimson King!
Reviewed in the United States on 31 May 2016
Verified Purchase
Awesome Crimson live experience from different era's.
Read more
Helpful
Sending feedback...
Thank you for your feedback.
Sorry, we failed to record your vote. Please try again
Report abuse

Thomas J. Williams
5.0 out of 5 stars Love this band and cd
Reviewed in the United States on 14 January 2013
Verified Purchase
I love this band and I think this is one of their best cd's. Just a fabulous piece of work!
Read more
2 people found this helpful
Helpful
Sending feedback...
Thank you for your feedback.
Sorry, we failed to record your vote. Please try again
Report abuse