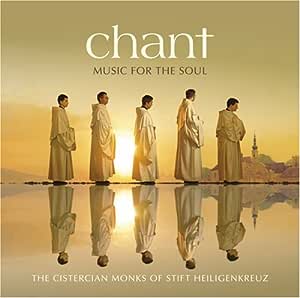 CHANT MUSIC FOR THE SOUL Import

Chant, is the most peaceful music imaginable. Chant: Music for the Soul, is the ultimate in relaxation and stress relief - the perfect antidote to our fast-moving modern world. Chant has proven to heal, calm and also give strength; its power is timeless and universal. Previous albums of chant have sold in the tens of millions. Further fueling the huge general demand is Chant's use in the smash-hit computer game Halo - this is chant for a new computer-gaming generation. One of the earliest known forms of music dating from the early Middle Ages, Gregorian chant was popularized by Enigma and the Benedictine Monks of Silos in the early and mid-1990s. Its hauntingly simple and hypnotic sound has attracted many followers, and Universal is determined to find the real masters of this music to perform a 21st Century version.

"When the Monks sing, the chant opens our hearts. We hope it purifies our souls and helps us regain clarity, light, strength and peace. Where there is chaos, we seek to restore order. Where there is emptiness, we try and find meaning. And where there is sadness, joy can return." --Gregor Henckel Donnersmarck, Abbot of the Cistercian Abbey Stift Heiligenkreuz

"the musical structure of chanting can have a significant and positive physiological impact ... studies also demonstrate that such practices have been shown to lower blood pressure, increase levels of the performance hormone DHEA as well as reducing anxiety and depression." -- Dr. Alan Watkins, Senior Lecturer in Neuroscience at Imperial College London

"It's a pretty safe bet that very few of Universal Music's recent signings count Pope Benedict XVI among their fans. But the pontiff is a definite admirer of the latest boys in the hood(s) to sign globally to Universal Classics" --Billboard

Walt
5.0 out of 5 stars Relaxation
1 April 2018 - Published on Amazon.com
Verified Purchase
Good quality recording. Chants like this are very restful. Allows your mind to calm and relax from the stress of the day.
Read more
7 people found this helpful

M. Maguire
5.0 out of 5 stars Exactly what I wanted
10 November 2018 - Published on Amazon.com
Verified Purchase
Smooth sound, easy listening, no jarring except the bell tracks. This beautiful chanting will transport you to a sacred place.
Read more
5 people found this helpful

Frank Cicero
5.0 out of 5 stars MOVING
21 August 2016 - Published on Amazon.com
Verified Purchase
It really touches your soul and moves you closer to God. It's great when your stuck in traffic or driving along a lonely road. It will put you in a deeper state of mind when praying at home or at a place of worship. I noticed that when I go to church there always seems to be a person gossiping or praying out loud and having the chant with ear Jacks fixes that annoyance. Peace is attainable when you join together in spirit with the monks in positive prayer .
Read more
9 people found this helpful

Pink Scarab
5.0 out of 5 stars above and beyond
28 February 2013 - Published on Amazon.com
Verified Purchase
I think this is the first time in my life any music made tears run down my cheeks. So divine, so mesmerizing, a true gem to humanity from the monks at Helligenkreutz. You feel the beauty, the strength and the solemn spirituality of their voices right in to the core of your soul. You do not have to be religious to enjoy this masterpiece (I am however). It is powerful, pure and healing .Brings me as close to God as I can. If there is music in Heaven, this must be it!!!
Read more
19 people found this helpful
Go to Amazon.com to see all 220 reviews 4.7 out of 5 stars