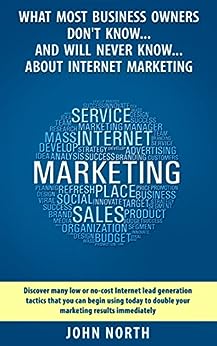 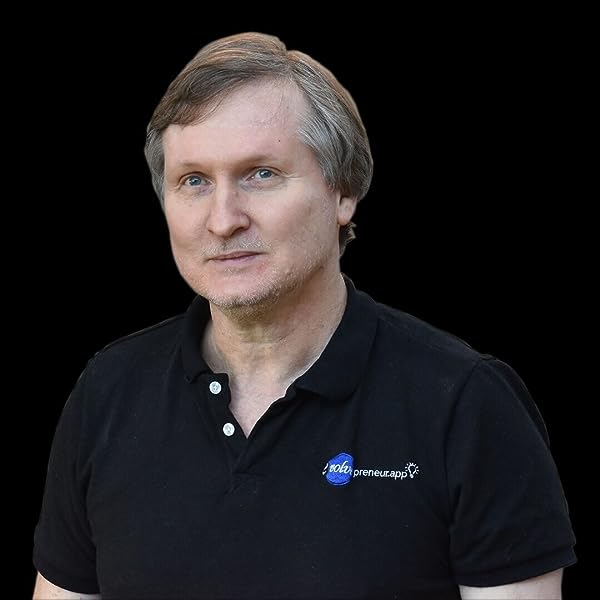 What Most Business Owners Don't Know And Will Never Know About Internet Marketing: Discover many low cost internet lead generation tactics that you can ... Linkedin, Facebook and Email Marketing) Kindle Edition

“For any business to succeed in the current era using internet marketing isn’t an option any longer, it’s an absolute must!”

The purpose of this Book is to educate and encourage business owners and managers on the main aspects of internet marketing so that you can learn, and apply, the key principles along with your traditional marketing techniques to literally leapfrog your competitors whilst generating substantially more sales, profits and cash.

Internet marketing has now become a necessity as part of your marketing strategies. Without Internet Marketing it’s highly unlikely your company can increase sales or revenues.

Discover many low or no-cost internet lead generation tactics that you can begin using today to double your marketing results immediately.

#1 Best Selling Author, JOHN NORTH is a versatile and well-rounded entrepreneur with a solid background in Accounting, Banking, Finance, Personal Development IT, Marketing and Business Management. John’s passion is to help business owners become more strategic and smarter about their marketing efforts. He constantly pushes the envelope of what’s possible in this modern era and is widely regarded amongst his peers as very innovative and highly creative in his approach.

Check out our Reviews!

Scroll up and grab a copy today.

John North is regarded as a versatile and experienced entrepreneur with a solid background in Accounting, Banking, Business Management, Finance, Personal Development, IT, Software and Strategic Marketing.

John has written Seven #1 Best Selling Books about book publishing, business strategy and internet marketing, and a book about Squash.

His latest book "Authority" was #4 on Wall Street Journal Best Seller and #83 on USA Today Best Seller List. The book was also #1 Non-Fiction on Amazon and ranked #14 overall in the store.

John is the CEO of Evolve Systems Group. He is a serial entrepreneur who has created many products and services that are designed to empower business owners and entrepreneurs. Some of these ventures include: Evolve Global Publishing, Evolvepreneur.app, Evolvepreneur.club, EvolveYourBusiness, and Evolve Mobile.

John is passionate about helping business owners become smarter and more strategic about their marketing efforts. He constantly pushes the envelope of what’s possible in this modern era and is widely regarded among his peers as very innovative and highly creative in his approach.

Evolve Global Publishing is a premium service that John created to enable him to help thousands rather than hundreds of entrepreneurs. He believes that anyone can follow a system to success, but the missing keys are implementation and accountability. The Evolve Global Publishing platform and its methodologies allow an entrepreneur and potential author to create and publish their own book in a little as 90 days without writing a single word!

His latest venture, Evolvepreneur.app, is an all-in-one platform designed to allow entrepreneurs to take control of their future and to be less reliant on using social media for managing their business online.

John lives in Sydney, Australia with his wife and son and plays competitive squash 5 days a week.

After leaving school at age 15, he started his first job as a bank employee in a small country town. Throughout the next 12 years, his roles in the bank included front office, supervision, legal, and lending. The bank taught him many skills; including management, systems, and procedures, and how to handle unhappy customers!

Along the way, he trained as an ambulance and state emergency services officer. He even received an Australia Day award for services to the local community.

In 1989, John started getting very interested in the emerging computer revolution and founded a part-time computer and accounting software business. After building and working on this new business, he soon realised the huge opportunity that was emerging in the field of technology, so he resigned from the bank and started working on his new business fulltime. In a few years, it quickly grew to over $1.5 million per year in recurring revenue.

In 2000, Australia introduced a new sales tax "GST" system, and his business went from boom to bust—the new tax drove businesses to computerise en masse for the reporting they needed to do, which sucked all new revenue from future years. The computer revolution was no longer a revolution—the Australian government had forced every business, big and small, to evolve. And so, in 2001, the market for Complete Business Results had almost completely disappeared.

John faced his first major business failure and was forced to close the business, but was fortunate enough to get a new job working as the CEO for his accounting software supplier in Sydney.

After six months of working as an employee once again, John made a successful bid to take over their Australian operations as their sole distributor and become a self-employed entrepreneur again. Within a few years, with annual revenues in excess of $2.5 million (nearly 80% recurring) they became #2 in the world for a major accounting software brand.

He learned a lot about developing recurring revenue, software development, negotiation, marketing, sales, and people management throughout these years.

In 2013, John sold the distribution company to focus on his new venture, "Evolve Systems", which provided digital marketing services for clients. Along the way, he became a hybrid book publisher and was involved in publishing over 2,000 books.

His next venture, evolvepreneur.app, will draw on all of his previous experience and then some!

Evolvepreneur.app's mission statement is to start a revolution that will help entrepreneurs establish their own complete business system that can compete with mainstream social media platforms.

His goal is to help move entrepreneurs away from being a cog in the machine, and to instead create their own machine!

5.0 out of 5 stars
5 out of 5
11 global ratings
How are ratings calculated?
To calculate the overall star rating and percentage breakdown by star, we don’t use a simple average. Instead, our system considers things like how recent a review is and if the reviewer bought the item on Amazon. It also analyses reviews to verify trustworthiness.

Madison T. Edwards
5.0 out of 5 stars Good Book!
Reviewed in the United States on 4 September 2014
Verified Purchase
WOW - I wish I had this book months ago! This is an excellent book, an invaluable resource for marketing your business on the internet and with social media! There is no stopping the internet! And in today's web environment internet marketing is a must or it will be hard to succeed - especially with a web based business.

I design websites and applications for people and when explaining the internet marketing aspect - I find that it is kind of difficult to explain to people who are not tech/internet savvy - what internet marketing is all about. I try to explain that having a website is like having a phone - just because you have one doesn't mean everyone will call you (unless it's a telemarketer LOL) - you have to 'give' your number out to the people you want to call and give them a reason to call - then they will call. Same thing with a website, you have to get yourself out there and market your site - otherwise, no one will come calling the way you want them to with constant traffic.

This book explains it all on a level that anyone can understand! I loved how the book reviews so much information, step by step so there is no confusion - here are just a few topics:

Its just like fitting pieces to a puzzle - It all makes sense in the end. I would definitely recommend this book to others.
Read more
3 people found this helpful
Report abuse

Kate Johansson
5.0 out of 5 stars I wish I could have read this book before I wasted thousands of dollars having personnel from a large hosting ...
Reviewed in the United States on 27 November 2014
Verified Purchase
I started my dog training business in 2007. Back then I was able to keep my blog and website visible using blog posts and videos. I had a presence on the web back then, which was very important because more than 60% of my business came from internet searches. Slowly, my website and presence slipped away because I did not keep up on the new requirements. As John points out in his book, the world of the internet is constantly and forever changing. I need to get back on the horse and stay ahead of changes if I want to maintain my business. There are so many people out there who need my services. But they can't find me! Thanks John, for giving this elegant and concise information.

I wish I could have read this book before I wasted thousands of dollars having personnel from a large hosting company build me a wordpress website that is totally ineffective. I would have known which questions to ask and would have had a list of requirements ready to list before I wasted my money. When you don't know what you don't know, it is impossible to communicate your wants and needs. I'm giving it 5 stars because for me it was worth 10 stars.
Read more
One person found this helpful
Report abuse

Grady Harp
5.0 out of 5 stars A guide through the Internet marketing maze
Reviewed in the United States on 3 September 2014
Verified Purchase
Australian Entrepreneur John North brings his background in Accounting, Banking, Finance, Personal Development IT, Marketing and Business Management and shares all of that information as it pertains to internet marketing in this succinct book designed to assist business owners in marketing efforts and to become more savvy in this new age of internet marketing. He is CEO of Evolve Systems Group and developed a network of services - Evolve Your Business - and shares that with the reader in many ways.

As the author states in his conclusion, `Internet marketing is not something that can be ignored in this digital age. So if you really want to make your business a successful one you need to make sure to consider everything detailed in this Book. In addition, you need to be open to any new techniques to ensure that you're up-to-date and on par with, if not ahead of, your competitors.'
A more concise and concentrated book of helpful information on this subject would be difficult to find. Grady Harp, September 14
Read more
3 people found this helpful
Report abuse