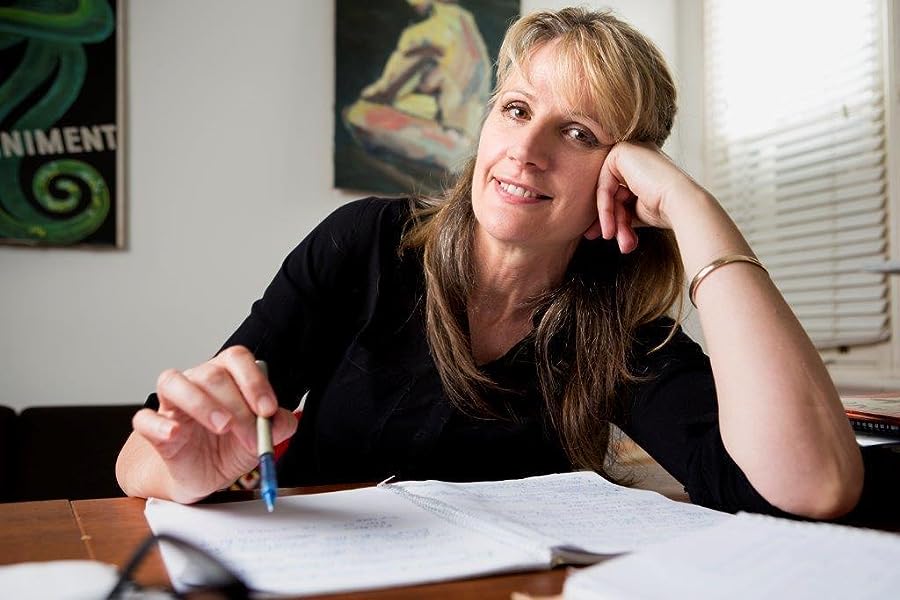 Page 1 of 1 Start overPage 1 of 1
Previous page
Next page
Start reading The Bus on Thursday on your Kindle in under a minute.

Bursting with raucous energy, while anchored in seriousness, The Bus on Thursday is an intoxicating horror-humor romp (Jeff VanderMeer, author of Annihilation)

This quirky tale is thrillingly original and wildly funny. A slippery narrative keeps you guessing what's really going on with a sharply witty narration (Sunday Mirror)

[A] bonkers, rather brilliant comedy . . . Savagely funny, The Bus On Thursday takes the nineteenth-century literary conceit of a woman going mad in the face of repressive social expectations and updates it with brio for the twenty-first century (Metro)

Shirley Barrett has crafted a quirky, one-of-kind, wild ride of a novel with demons, kangaroos, a missing school teacher, a remote town where things are strangely off-kilter, and wonderfully bizarre cast of characters. The Bus on Thursday is a darkly funny and deeply unsettling novel you'll devour in one sitting (Jennifer McMahon)

A darkly funny story in the company of a riotous, jinxed heroine (Psychologies)

Barrett's narrative rushes headlong forward in a crazy and exhilarating rush of emotion and plot . . . I fell head over heels for The Bus On Thursday for its plain bonkers plot (Stylist)

It's a hilarious tale, and Eleanor is the perfect anti-heroine. One to brighten gloomy afternoons (Image magazine)

Who would have thought horror-humour would be so fun? It's chilling, but so camp and perfectly paced that it works (Elle)

It defies convention. I was hooked from the opening pages . . . it's laugh-out-loud horrible and
perfectly nuts - you'll never find anything like it again

This is a sharp, twisted, hilarious treasure of a book. Sort of Twin Peaks meets Bad Teacher that had me laughing, wincing and falling in love with the flawed and flawless narrator (Jess Kidd)

Bridget Jones meets Twin Peaks in this black comedy about a woman's retreat to a remote Australian town and the horrors awaiting her.

Eleanor arrives in Talbingo - population 241 - looking for a fresh start. But 241 has recently become 240, because the town's schoolteacher has gone AWOL - presenting Eleanor with a chance to start again.

Escaping a life turned upside down, recovering from a bad break-up and illness, Eleanor thinks Talbingo might offer a regenerative form of solitude. What she actually finds is a remote cabin with no phone service or wifi and an alarming number of locks on the front door, which someone keeps knocking on late at night.

Riotously funny, deeply unsettling, and surprisingly poignant, Shirley Barrett's The Bus on Thursday is a disconcerting story of small-town life and a wicked, weird, wild ride.

'Beautiful and brutal, witty and kind, Rush Oh! is a story of great surprises and a beating heart - a book never to forget' Markus Zusak, author of The Book Thief

'Hugely funny and peopled with a cast of characters I came to love like my own friends, Rush Oh! reminded me why I love reading' Hannah Kent, author of Burial Rites

'A rollicking seaborne ride . . . humorous, imaginative and tender, you'll want to race through Rush Oh! to find out what happens' Independent

3.4 out of 5 stars
3.4 out of 5
96 global ratings
How are ratings calculated?
To calculate the overall star rating and percentage breakdown by star, we don’t use a simple average. Instead, our system considers things like how recent a review is and if the reviewer bought the item on Amazon. It also analyses reviews to verify trustworthiness.

Elizabeth Browne
2.0 out of 5 stars Tangengential wraped up in a delusion
Reviewed in Australia on 6 February 2019
Verified Purchase
I did not like Eleanor from the outset. Her Cluster B Personality traits increasingly annoy me even as she clearly goes into a psychotic depression not helped by side effects of Tamoxifen and abrupt ceasation of Zoloft. I did have a moment of compassion when she was rebuked by Harry the Hare Lip but honestly wallowing in self pity instead of completing the re-construction procedure?! Honestly, her treating team have a lot to answer for. Why would they not recognise that in a young woman who has started breast re-construction it is essential to complete it?! Also the mental health issues impacting on her rehabilitation should have been duly acted on.
I finished the story rapidly to get to the end! I did not find it a pleasurable read as the main theme was very veiled and in fact, most of the reviews I have read do not mirror or even come close to my thoughts on The Bus On Thursday. I re-read the book and yes, I was right the first time, Eleanor hailed "the Bus" and went to live with her dad in the motel with the heated pool and coffee making facilities. Like I said, I was not entertained by the "comedic" style to illustrate the complexities of breast cancer and psychotic depression, I just wanted to finish it to tie up the lose ends and understand what I had read! I believe it could be a lot better as a movie.

Jude
4.0 out of 5 stars Funny as!
Reviewed in Australia on 12 January 2019
Verified Purchase
Lots of little giggles and sniggers throughout the book. Just flabbergasted by the ending is all. Did I miss the bus?
Read more
Helpful
Report abuse

Therese Tucker
1.0 out of 5 stars What the???!!
Reviewed in Australia on 28 January 2019
Verified Purchase
Not sure what i just read, weird, pointless book. Sorry i think the genre is definitely not for me. Good luck.
Read more
One person found this helpful
Helpful
Report abuse

Marlin
TOP 500 REVIEWER
4.0 out of 5 stars Dark humour
Reviewed in Australia on 21 October 2018
I won a paperback copy of this book through the Publisher but happened to come across it as an audiobook in the library. At a lenght of 5 1/2 hours I thought it would be perfect to keep me company while gardening......and that it did!!

I went into this book blind and what a wild, dark humour ride it was. It was so entertaining and in fact, I believe my enjoyment was enhanced as an audiobook. Since it was narratored in the first person, I felt like Eleanor was telling me the story over a cup of coffee in a very expressive way.

Throughly enjoyable, I believe this one would be good for a book club with so many angles for discussion.

AJs Reviews
3.0 out of 5 stars Dark, weird and snarky
Reviewed in Australia on 6 October 2018
This is one of the few books I've finished and sat back thinking "what the heck did I just read?" It starts off normal enough, although the style might throw some readers. Lighthearted, snarky and sarcastic, its not written the way you'd expect for the subject matter, and yet it works. By the time I got to the end, I really didn't know what was going on. It's a wonderfully weird book that gets stranger every chapter, but in the aftermath I'm torn between thinking it's genius, and feeling dissatisfied at the lack of clarification as to what all that was about.
Many thanks to Allen & Unwin for the ARC, and for publishing a book so far from the norm.
Read more
2 people found this helpful
Helpful
Report abuse

Monica Mac
TOP 100 REVIEWER
2.0 out of 5 stars Just too weird.
Reviewed in Australia on 3 January 2020
Crikey, how to describe this book??? I don't like lots of bad language in a book, and there is a LOT of it in this one, but somehow, at the beginning of the story, it works. Eleanor is a snarky, angry, frustrated woman and it shows. I have sympathy for her, I do.

Unfortunately, once she lands in Talbingo, everything unravels completely. Her relationship with Gregory (those two were a good match, although I thought the sort of things he said to her were rich, coming from him, and nasty) was weird, her relationship with the children in her care was frightening and all in all, this book was horrible. Poor Miss Barker too.

It really did start off ok, I get that she was frustrated and angry about her situation and wanted to escape, but she ended up being totally unlikeable and I ended up not caring what happened to her.

I know this book was supposed to be quirky but it came off, to me, as trying a bit too hard and it was too weird and Eleanor was too horrible a character for me to like it. I am sorry though, because I think it could have been good.
Read more
Helpful
Report abuse
See all reviews

Isabel Shipton
5.0 out of 5 stars Cracking read!
Reviewed in the United Kingdom on 31 July 2020
Verified Purchase
This is a racing irreverent fiction which takes you with it and leaves you breathless and maybe a bit shocked. I found it enormous fun and just the escape I needed from the serious surroundings of the COVID-19 world
Read more
One person found this helpful
Report abuse

c leicestershire
1.0 out of 5 stars Odd
Reviewed in the United Kingdom on 1 June 2019
Verified Purchase
I read the first few pages of this and thought I would enjoy it. The response of a young woman to a diagnosis of breast cancer. But the book changes and becomes bizarre and I thought uninteresting ( or dark and funny depending on your sense of humour?). Anyway. Read the first few pages and if you enjoy them, buy something else! And it dosn't even end with a full-sto
Read more
Report abuse

Sun Girl
5.0 out of 5 stars Barking Mad & Marvellous!!
Reviewed in the United Kingdom on 11 May 2020
Verified Purchase
I LOVED this rollercoaster-ride of a completely bonkers book! It would make a great movie. Struggling to get into anything else after that. Want more please Shirley!!
Read more
Report abuse

jacobus everaers
5.0 out of 5 stars A verry unuseal book.
Reviewed in the United Kingdom on 1 January 2019
Verified Purchase
Such a strange book, it will stay a long time with me. It started of very funny I laughed out loud then it tailed off a bit
I read some one else review who compared it to Jacobs ladder, and I agree with that, but as I said it will stay with me
for a long time.
Read more
Report abuse

mrs c betts
5.0 out of 5 stars Unusual storyline
Reviewed in the United Kingdom on 18 November 2018
Verified Purchase
Unusual story but I enjoyed reading it .
Read more
Report abuse
See all reviews
Back to top
Get to Know Us
Make Money with Us
Let Us Help You
And don't forget:
© 1996-2021, Amazon.com, Inc. or its affiliates