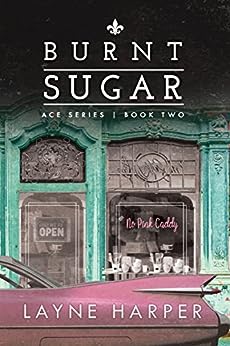 Amazon Customer
5.0 out of 5 stars Addictive!!
Reviewed in Australia on 9 July 2017
Verified Purchase
I am yet to ever read a book written by Layne Harper that I am disappointed with. Once again These characters are superbly written that you are so engrossed in the storyline, you can't put the book down. I cannot wait for the next instalment.
Read more
Helpful
Report abuse
See all reviews

Amazon Customer
5.0 out of 5 stars A brilliant read
Reviewed in the United Kingdom on 21 July 2017
Verified Purchase
The follow up to No Pink Caddy and I loved it. It was great to find out how MK and her Aaron got along after the ending of No Pink Caddy and it didn't disappoint. As a Britt I love to read about New Orleans, the city, the people and the cuisine. Layne describes it so well I can lose myself in the city. Can't wait for the next book in the series
Read more
One person found this helpful
Report abuse

acl036
5.0 out of 5 stars She Certainly Flew With Her Own Wings...
Reviewed in the United States on 28 June 2017
Verified Purchase
There is really nothing more exciting than finding a new-to-you author who makes you fall in love with her characters and the story she's telling. This is what happened to me with No Pink Caddy (Book 1) and I admit, part of me was concerned Burnt Sugar would not live up to the amazingness of NPC. But it not only lived up to my expectations, it totally surpassed them.

BS picks up where NPC left off so if you haven't read NPC, you need to start there. Without giving any spoilers to the story it is hard to express why this series has captured my attention. Layne wrote amazing characters with MK and Aaron/Johnny in NPC, but in BS she added a lot of depth and growth to them. And one thing I really like about their growth is that it is realistic, the flaws of the characters aren't immediately resolved just because they are learning from heir mistakes. And while the characters are facing new challenges in this book, the issues they previously faced are still influencing them, and I think that is relatable and realistic.

We also get a few new side characters, along with the presence of MK and Aaron's families, band mates and friends. Again, this story mainly focuses on MK and Aaron, and I think my one suggestion would be to have a little more interaction with some of these side characters, but I feel like maybe some of them are being introduced to play larger parts down the line. So I am excited about that.

And like in NPC, Layne does an excellent job of describing a city she obviously loves. It is easy to have a clear idea of where MK lives and what her store looks like. You almost feel a part of their lives because you can picture everything so well. And this is a credit to Layne's writing.

I devoured this book in one night and spent most of my time messaging my reading buddy over what was happening. If you liked NPC, you will love BS. It is so well written, with great characters and maybe even more importantly, a great story. ( And side note, I HAVE to say, Layne's covers for this series are some of my favorite ever. They are just so gorgeous.)

It goes without saying this book/series is a favorite of mine and I can't wait for the next one in the series!
Read more
4 people found this helpful
Report abuse

Vbkman
5.0 out of 5 stars Give Me Some More Sugar!
Reviewed in the United States on 1 April 2018
Verified Purchase
Love this author’s Infinity series, so I was super excited to read this series. I was bit uncertain of the main H in the first book. He reminded me of the H in the This Man series, a little bit wild, uncertain and demanding. An emotionally immature - tormented soul that was at times, hard to love. I guess that what you get dating a rock star.

I love how this story is developing. Aaron’s journey to be a better person for MK - swoon. MK is great heroine who is both strong and loving. She uncompromising on her quest to find true love and wanting what she feels she deserves.

As a reader, I am emotionally invested in MK and Aaron’s happily ever after. That is the sign of a great romance. When the author portrays believable characters that become your best friends. I ❤️ reading MK’s blog posts.

As an avid romance reader, I am amazed that this author is not receiving more recognition. Read this series and read the Infinity series. If you love a strong h that can take on larger than life H, then this series and author is a must read for you!
Can’t wait for the third book 😊
Read more
One person found this helpful
Report abuse

Nikki
5.0 out of 5 stars 5+ star follow up to No Pink Caddy - Awesome read!
Reviewed in the United States on 29 June 2017
Verified Purchase
I was absolutely THRILLED to read Burnt Sugar. After No Pink Caddy, I couldn't wait to get more MK and Aaron. Reader note - if you have not read No Pink Caddy, please do. Burnt Sugar is book 2 and starts where NPC ends.

This review will be tough to write without spoilers. Please read the book - there are so many wonderful gems in the writing, you'll be happy you lived in MK's world for a bit.

MK - I loved her in NPC and loved her in Burnt Sugar. This is a big nod to the amazing writing of Layne Harper - MK is the same character that we (and Aaron) fell in love with in NPC. She's headstrong, loving, passionate, loyal. In NPC, we saw her pushing to be the person she wanted to be. In Burnt Sugar, we see her living her dream, while still being her.

Aaron - In NPC, he was flawed. He was a bit lost, still learning to be "an adult" and "in a relationship." We still see this, but we also see him pushing to grow to be a man worthy of himself and MK.
Together, MK & Aaron still have passion and sparks AND growth.

I mentioned before that Layne can write. She can, but it's more. Her descriptions of everything are so perfect that her words completely draw the picture in your mind. You can see everything that MK sees and experiences.
There are some super realistic (and funny) scenes that any girl can relate to.
Excellent read - perfect story - kudos to Layne Harper!
Read more
One person found this helpful
Report abuse
See all reviews
Back to top
Get to Know Us
Make Money with Us
Let Us Help You
And don't forget:
© 1996-2021, Amazon.com, Inc. or its affiliates