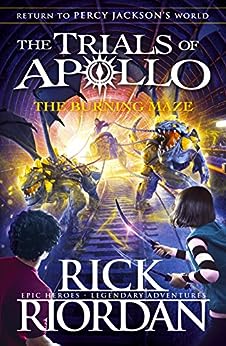 The Burning Maze (The Trials of Apollo Book 3) Kindle Edition

The third title in Rick Riordan's Trials of Apollo series - set in the world of Percy Jackson --This text refers to the paperback edition.

Rick Riordan, dubbed 'storyteller of the gods' by Publishers Weekly, is the author of five New York Times number-one bestselling book series with millions of copies sold throughout the world- Percy Jackson, the Heroes of Olympus and the Trials of Apollo, based on Greek and Roman mythology; the Kane Chronicles, based on Egyptian mythology; and Magnus Chase, based on Norse mythology. Percy Jackson and the Lightning Thief, Rick's first novel featuring the heroic young demigod, won the Red House Children's Book Award and is now a blockbuster film franchise starring Logan Lerman.To learn more about Rick and his books, you can visit him at www.rickriordan.co.uk or follow him on Twitter @camphalfblood. --This text refers to the paperback edition.

"[Apollo] continues to grow as a sympathetic narrator, his egotism and vanity slowly giving way to humility and self-sacrifice. His flashes of vulnerability, especially around the reminder of his long-departed lover Hyacinthus, are endearing . . . ."--Kirkus Reviews

"Of course, this is Riordan, so there's plenty of snarky banter and comedy mixed in among the drama. Amid the cinematic pacing and well-choreographed action scenes, Riordan squeezes in plenty of character development into the expanding cast of characters, even minor ones who don't get a lot of page space. Riordan's fans will appreciate seeing some familiar faces in this puzzle-filled installment, and a cliff-hanger ending will make them eager for the sequel."--Booklist --This text refers to an alternate kindle_edition edition.
Read more

4.8 out of 5 stars
4.8 out of 5
5,738 global ratings
How are ratings calculated?
To calculate the overall star rating and percentage breakdown by star, we don’t use a simple average. Instead, our system considers things like how recent a review is and if the reviewer bought the item on Amazon. It also analyses reviews to verify trustworthiness.

Kindle Customer
3.0 out of 5 stars Great but disappointing
Reviewed in Australia on 18 February 2021
Verified Purchase
So the story itself is actually great however i purchased this book for the purpose of the short story that was supposed to be at the end of the book. In the books description it said that this version had included a short story of percy jackson and clarisse have to get ares chariot back so i purchased it expecting to see this but it was not included what happened kindle. Im sorry Rick Riordan its not your fault.
Read more
Helpful
Report abuse

Amazon Customer
5.0 out of 5 stars five stars... again
Reviewed in Australia on 27 July 2018
Verified Purchase
nedless to say, rick riordan has done it again. needless to say.
i wish the next book will be out quickly.
Read more
Helpful
Report abuse

Amazon Customer
5.0 out of 5 stars Very good
Reviewed in Australia on 7 March 2019
Verified Purchase
This book was filled with twists and humor, I really enjoyed it. Would rate it higher if I could. Can't wait for book four. Thanks Rick, for another awesome series
Read more
Helpful
Report abuse

Rani
5.0 out of 5 stars amazing
Reviewed in Australia on 2 September 2018
Verified Purchase
i loved this book for it was so action packed was full of emotion and i should not even have to mention extremly funny i also can't wait for the tyrantss tomb to come out
Read more
Helpful
Report abuse

Andrew Collins
5.0 out of 5 stars Interesting
Reviewed in Australia on 5 September 2018
Verified Purchase
I love rick riordans work, his books have made me into a complete geek when it comes to mythology. Rick, I love your books so much thank you.
Read more
Helpful
Report abuse

floss
5.0 out of 5 stars A must-read in the world of percy jackson
Reviewed in Australia on 29 January 2019
Verified Purchase
ricks "the burning maze"
has a lot of twists and turns
some good and some bad

lucy kealy
5.0 out of 5 stars 5 stars is too little.
Reviewed in Australia on 7 June 2018
Verified Purchase
Amazing book, haven’t finished it but am loving it.
Read more
Helpful
Report abuse
See all reviews

Gary
4.0 out of 5 stars Another gripping book except....
Reviewed in the United Kingdom on 4 May 2018
Verified Purchase
As my title says, another gripping book by rick roirdan, the characters that return get more development (except one which i will
spoil and complain about later) and the new characters add fun depth. The villains are very good making you want to hate them, and all in all its a great page turned as always. As for why I dropped this one star though (this is the little spoiler bit next)

SPOILER the reason for the drop in star is for the treatment of Jason Grace, he is in the book for less than about 70 pages, and in that time we find out that piper dumps him, he then accidental uses lightning on someone that alerts guards, acvidently blows meg out a window and finally gets killed (and not in a heroic way in my opinion). Jason is not my favourite character but I did like him and this seemed a fairly poor way for him to go, my hope is there's some plan to bring him back or have him help in the underworld or something, cause this was honestly a bad way for the character to be treated, especially since it seems like every one else from the previous books is sorting out how they will live the rest of their lives or getting some proper send off
Read more
3 people found this helpful
Report abuse

Meike Leitsch
5.0 out of 5 stars Darker than its Predecessors
Reviewed in the United Kingdom on 12 May 2018
Verified Purchase
This book has everything I appreciate from Rick Riordan's writing: humour, action, adventure and, yes, heartbreak.
Those who have been following his many stories over the decades will find great sorrow in reading this one, but it is sorrow well deserved. In a much darker and much more mature tone than the previous books in this series, The Burning Maze raises the stakes when things spiral out of control as Apollo, his demigod master Meg McCaffrey and the satyr Grover attempt to free the third oracle from the evil triumvirate's clasp.
Read more
2 people found this helpful
Report abuse

Mr. Mark Sweeney
3.0 out of 5 stars good ig?
Reviewed in the United Kingdom on 1 September 2018
Verified Purchase
personally i love the rick riordan books and think they are all great reads, however, i found this book a little underwhelming. i couldnt seem to get as attached to the characters or fully emphasise with them as much as i have done previously. i felt that some issues were brushed over particularly when jason and piper were introduced. overall it was a good read just not as gripping as some of rr other books.
Read more
2 people found this helpful
Report abuse

W. Liu
4.0 out of 5 stars Things are getting dark...
Reviewed in the United Kingdom on 31 December 2019
Verified Purchase
This book has all the qualities of Rick's writing. This was an amazing read although I couldn't really get attached to the characters. Even tho Apollo is supposed to be whiny, sometimes I just found him annoying. Meg isn't likeable and Piper does not seem to be like a child of Aphrodite.

Sometimes I just wanted to skip a few chapters. Reading this book, I was mostly bored

Rick definetely took the "More people should die" comments seriously but <spoiler> Jason died in the worst way possible and I was crying my eyes out. Most of the characters who died in ricks books were minor or came back to life *cough* Leo *cough* but even though Leo isnt like, a main character or my favorite one his death really upset me.

Chris S.
2.0 out of 5 stars could of been better.
Reviewed in the United Kingdom on 24 December 2018
Verified Purchase
i think that this is a decent book, but i can't say OMG I LUV THIS BOOK! you could say my expectations were high but i didnt expect this. Rick Riordan is my faveriout author because of percy jackson, heroes of olympus was a step down - but still awesome! trials of appollo took it to a whole different level . dont get me wrong its cool but no. i dont want to here About this. its fun and humorous but it doesnt feel right. too predictable. i miss the juice.

also it might not be the best of your books but its still better then any other books by different authors.

please do a book 4!
Read more
Report abuse
See all reviews
Back to top
Get to Know Us
Make Money with Us
Let Us Help You
And don't forget:
© 1996-2021, Amazon.com, Inc. or its affiliates