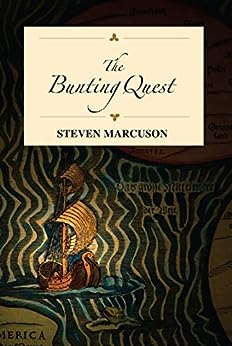 Steven Marcuson was born 1959 and raised in Glasgow, Scotland into a small but vibrant Jewish community. He received a BSc from Strathclyde University in Glasgow, majoring in textiles and marketing. He then worked for two years in the textile industry in Manchester, North England. Prior to immigrating to Australia in 1983, he volunteered for a year on a kibbutz in Israel and backpacked extensively throughout Europe, working as he went. In late 1983 he established Trowbridge Gallery, an antique print and map gallery in Perth which he runs to this day. --This text refers to an alternate kindle_edition edition.

Mark Zambra
5.0 out of 5 stars A good read
Reviewed in Australia on 2 November 2016
Verified Purchase
A good yarn that is quite possible to believe
Read more
One person found this helpful
Helpful
Report abuse

Monique
5.0 out of 5 stars A ripping yarn indeed.
Reviewed in Australia on 25 February 2017
Verified Purchase
A brilliant story tinkering on the edge of reality and fiction. Beautifully written, lovely use of words and a joy to read.
Read more
Helpful
Report abuse
See all reviews

MisterHobgoblin
2.0 out of 5 stars Even genre readers should have standards
Reviewed in the United Kingdom on 31 December 2016
Verified Purchase
The Bunting Quest is a poor man's Dan Brown.

This is not my type of book at all. I had expected a rollicking tale of historical drama on the high seas, with a touch of mapping and pre-European Australia. What I got was some conspiracy theory that never convinced me, cardboard characters and expository dialogue.

And it jumps around. There are multiple plot strands and point of view chops about all over the place. Locations in the novel include - and I doubt I have remembered them all - Northern Ireland, the Vatican, Germany, England, Belgium, East Africa, Java, Western Australia. The time settings switch between the present day and the 1600s - with various reminiscences about other times too. I am sure it is supposed to feel pacy, but it ends up feeling undercooked.

The characters are simply not credible. You've got the Pope calling in on a heretic German Lutheran Priest. Hello, I'm the Pope. Yes you are, how can I help you? Perhaps you can help me with this letter written by Jesus - in Aramaic which, serendipitously, we both speak. As did all my predecessor Popes. Why yes, although I don't respect you or your church, I will give up my current life to go on this quest for you...And in the present day, we meet a young woman - probably in her mid 20s - who is the Oxford Professor of Ancient Maps. Yeah right. And she is willing to give up her life to go traipsing round the world dodging murderous art thieves with a man her father slightly knows.

The story is full of holes and non-sequiturs, despite so many stilted expository conversations where people state the obvious and tell each other things they already know with all the conversational skills of Wikipedia.

I had wanted and expected to enjoy this novel. Mea culpa for mistaking a genre novel for something more interesting. But even that cannot defend this being such poor quality. Even genre readers should have standards.
Read more
One person found this helpful
Report abuse

Desert Reader
4.0 out of 5 stars An excellent book with a highly original plot. Well worth the read
Reviewed in the United States on 23 September 2016
Verified Purchase
Not only does the book have an amazing story line, it is beautifully written, thoroughly researched, and incredibly interesting.

The Bunting Quest alternates between Europe (Modern and 16th Century) and Western Australia, as its array of multi-ethnic characters interact on the canvas of Marcusson’s highly-original plot. The Bunting Map referred to in the title - a genuine article that the author once possessed - appears to bear a crude outline of Western Australia - an impossibility by conventional understanding, as Europeans had not yet discovered the continent when the map was drawn.

Having decided to write a book to explain this unusual artifact, Marcusson needed a plot to bring it all together. And what a plot he dreams up; if the secret of the Bunting Map is ever revealed, it would bring catastrophe upon the whole of Christendom!

Marcusson’s descriptions are detailed, his language rich, and his historical knowledge impressive.

This is a great book, well worth the read, and it wouldn’t surprise me in the least to see it eventually projected on a cinema screen.
Read more
2 people found this helpful
Report abuse

Rorycal
3.0 out of 5 stars An intriguing plot poorly executed
Reviewed in the United States on 11 December 2016
Verified Purchase
A really interesting storyline, but the writing just wasn't up to it - the contemporary characters simply didn't ring true, and there was a school essay quality to the prose. In the end it was disappointing to not see a ripping yarn not carried through satisfactorily...
Read more
Report abuse

Robert D Guttmann
5.0 out of 5 stars Interesting read
Reviewed in the United States on 12 November 2016
Verified Purchase
The book is a bit like a dot to dot picture. Amazing what you create when you join all the dots together.
Read more
One person found this helpful
Report abuse
See all reviews
Back to top
Get to Know Us
Make Money with Us
Let Us Help You
And don't forget:
© 1996-2021, Amazon.com, Inc. or its affiliates