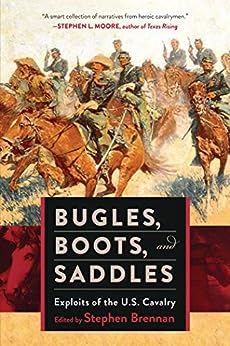 by Stephen Brennan (Editor) Format: Kindle Edition
See all formats and editions
Sorry, there was a problem loading this page. Try again.
A history of America’s military on horseback.

For three thousand years, the horse soldier has played a key role in both war fighting and in peace keeping all over the world, not only as a highly mobile strike force in battle but also as an instrument of reconnaissance and occupation, exploration, and irregular warfare.

The American tradition of the mounted warrior is a proud one. But in the first days of our revolution, it looked as if George Washington was prepared to dispense with the use of mounted troops altogether. Eventually he saw their value, and over the next hundred years the cavalry adapted itself to the needs and imperatives of the growing nation. This is the story of the US Cavalry.

In Bugles, Boots, and Saddles you’ll be able to ride along with heroes from years past, including:

“Light-Horse Harry” Lee and his legion in the Revolutionary War
Custer at Gettysburg, at the Battle of the Wabash, and at Little Big Horn
Crook in pursuit of the Apache chieftain Geronimo in 1880s Arizona
Teddy Roosevelt and the Rough Riders at San Juan (Kettle) Hill
And many more

Bugles, Boots, and Saddles tells not only the history of our military, but also how we gained so much success due to the horse soldier. With an appendix on the daily life of US Cavalrymen, Brennan gives all the detail that any military historian would want to see.
Read more
Previous page
Next page

"Bugles, Boots, and Saddles is an interesting look into the evolution and tactics of the U.S. Cavalry, from the ragtag colonial forces of 1776 to the smartly equipped Rough Riders under Roosevelt at San Juan. Editor Stephen Brennan has compiled a smart collection of narratives from heroic cavalrymen who advanced the strategies of military offense in the Mexican War, Civil War, and Custer's last stand at Bighorn."
--Stephen L. Moore, author of Texas Rising
"This book is a refreshing, enlightening, and entertaining study of the cavalry through the eyes of those who witnessed it firsthand. The reader can ride along into some of the most famous conflicts in history and virtually feel the thundering hooves, the sounds and smells of battle, and hear the cries of victory and defeat."
--Thom Hatch, author of The Last Days of George Armstrong Custer
"This volume is a must-read for anyone interested in the history of the U.S. Cavalry. In addition to discussing basic elements such as weapons and tactics, the author provides extensive coverage of the role of American cavalry in conflicts from the American Revolution to the Spanish-American War. Key leaders and crucial campaigns and battles that are often overlooked by historians receive the attention they have long deserved."
--Jim Piecuch, author of Cavalry of the American Revolution
"Drawing upon the writings of such cavalry notables as Generals Henry 'Light-Horse Harry' Lee and George Crook, writer Stephen Brennan takes us on a romp across America's battlefields, enlightening us along the way of the tremendous importance of the horse soldier in American military history."
--James A. Crutchfield, author of The Way West: True Stories of the American Frontier
"Historians, both professional and dedicated amateurs, know that original sources generally provide the best and most authentic information. For those interested in the history of the US Cavalry, Stephen Brennan's Bugles, Boots and Saddles is an interesting and useful compendium of memoirs and contemporaneous reports on the operations of the US Cavalry from the Revolutionary War through the Spanish American War. As such, it is a valuable addition to the libraries of cavalry enthusiasts."
--Terry Mort, author of The Wrath of Cochise
"Bugles, Boots and Saddles is a vivid and colorful history of the U.S. Cavalry from the Revolution to the Spanish-American War. Using original source material, Stephen Brennan presents detailed and personal accounts of those who became famous leading their troopers into battles, including Light Horse Harry Lee, Zachary Taylor, Phil Sheridan, Winfield Scott, and of course, Custer, among many others. The book is a good history and a good read."
--Duane Schultz, author of Coming through Fire: George Armstrong Custer and Chief Black Kettle
"In Bugles, Boots, and Saddles, editor Stephen Brennan has assembled a fine series of vignettes highlighting the role of America's mounted arm from the War of Independence to the US struggle with Spain in 1898. The writing is at once dramatic and informative. The reader rides along with Light-horse Harry Lee, with Phil Sheridan and Teddy Roosevelt; but also with less well-known figures like Captain Charles A. May at Resaca in 1846, and George Forsyth in 1868."
--David A. Powell, award-winning author of Failure in the Saddle and The Chickamauga Campaign, Vols. I-III
"Bugles, Boots and Saddles is an exciting read and well-tailored for fans of history. Of special note are the sections detailing the heroic use of U.S. cavalry in the Mexican War. This almost forgotten segment of American history desperately needs more attention and positive works of this nature. It was great to see it come alive on the page."
--Daniel Murphy, author of William Washington, American Light Dragoon
"Stephen Brennan has crafted a fine selection of key topics and vibrant episodes that demonstrate the value of cavalry for American forces from the Revolutionary War to the end of the nineteenth century. This volume belongs on the bookshelf for any attentive reader of military history."
--Clyde A. Milner II, co-editor of The Oxford History of the American West --This text refers to an alternate kindle_edition edition.

Stephen Brennan has coauthored several books, and has edited such collection as The Best Ghost Stories Ever Told and The Best War Stories Ever Told, amongst others. He resides in New York City.
--This text refers to an alternate kindle_edition edition.

Dan Snyder
4.0 out of 5 stars Cavalry
Reviewed in the United States on 16 May 2020
Verified Purchase
I love the way CH tells the stories of history. Quick reads, engaging and with enlightening anecdotes. I can even overlook the typos.
Read more
One person found this helpful
Report abuse

george
5.0 out of 5 stars Five Stars
Reviewed in the United States on 16 May 2018
Verified Purchase
A good "overview" of the horse-born Cav.
Read more
One person found this helpful
Report abuse

boris339
5.0 out of 5 stars Five Stars
Reviewed in the United States on 14 June 2018
Verified Purchase
MED IS THE PERFECT SIZE FOR MY PUP. 6 PACK WOULD HAVE BEEN NICE
Read more
One person found this helpful
Report abuse
See all reviews
Back to top
Get to Know Us
Make Money with Us
Let Us Help You
And don't forget:
© 1996-2022, Amazon.com, Inc. or its affiliates