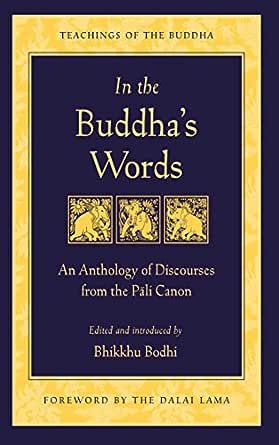 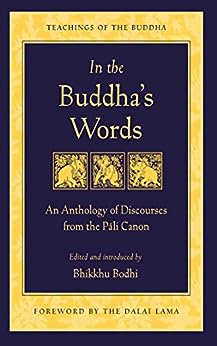 In the Buddha's Words: An Anthology of Discourses from the Pali Canon (The Teachings of the Buddha) Kindle Edition

"I am sure that many people will benefit from In the Buddha's Words."--Thich Nhat Hanh

"A remarkable book. In the Buddha's Words is an anthology drawing primarily of the first four [widely available translations of collections of the Buddha's spoken teachings], and manages quite successfully to both summarize them and extract their essence. [ . . . ] Although this material has been available for some time now, one of the things that has remained a difficulty for many readers is its complexity and scope. In the Buddha's Words provides a framework with which to see the teachings' overall structure, and it does so in a skillful way. Bhikkhu Bodhi's introductions alone, strung together, would themselves serve as a beautiful and accessible overview of the dhamma. [ . . . ] I think this anthology will rapidly become the sourcebook of choice for both neophyte and serious student alike. In the Buddha's Words reveals the mature understanding of someone who has not only a complete mastery of his material, but also of someone who has deeply understood the nature and intention of the dhamma and who shares it with us as an expression of his own caring. This publication will be very much welcomed by Western meditators and students of the dhamma. [ . . . ] Any amount of study or practice that helps to deepen wisdom and assist us to emerge from layers of delusion is precious. This book could contribute to this enterprise more than almost anything else in print. It gives us access to the very texture of the dhamma, the specific words and phrases, which guided and inspired the Buddha's original students. Bhikkhu Bodhi has created a framework upon which he has placed the key elements of the dhamma for all to plainly see and investigate for themselves. With a map of such clarity in hand, one may tread the landscape with confidence. Those for whom the Buddha's teaching is a living tradition will find this book to be a dear friend and spiritual companion. My overall response to the work is one of gratitude--to the author, the translator and editor, the publisher, and all the other helpers and benefactors who have contributed to making this gift to the world."--Andrew Olendzki, Executive Director of the Barre Center of Buddhist Studies -- excerpted from a three-page review in Buddhadharma

"Congratulations and gratitude to Wisdom for the new publication In the Buddha's Words--if someone relatively new to Buddhism were to buy only one book, this should be it!"--Jean Smith, author of NOW! and editor of 365 Zen

"As close as we'll get to the original teachings and account of the life of the Buddha."--Tricycle

"In the Buddha's Words has ten chapters, each with an insightful introduction and a handful of sutras, many newly translated, edited and condensed to make them more manageable for the non-scholar. The book begins with a rich explanatory General Introduction that alone would be worth the purchase of the book."--Right View magazine, from the Mid-America Buddhist Association --This text refers to an alternate kindle_edition edition.

Tenzin Gyatso, the Fourteenth Dalai Lama, is the spiritual leader of the Tibetan people. Born in northeastern Tibet in 1935, he was as a toddler recognized as the incarnation of the Thirteenth Dalai Lama and brought to Tibet's capital, Lhasa. In 1950, Mao Zedong's Communist forces made their first incursions into eastern Tibet, shortly after which the young Dalai Lama assumed the political leadership of his country. In 1959, Chinese forces occupied the city, forcing His Holiness to escape to India. There he set up the Tibetan government-in-exile in Dharamsala, working to secure the welfare of the more than 100,000 Tibetan exiles and prevent the destruction of Tibetan culture. In his capacity as a spiritual and political leader, he has traveled to more than sixty-two countries on six continents and met with presidents, popes, and leading scientists to foster dialogue and create a better world. In recognition of his tireless work for the nonviolent liberation of Tibet, the Dalai Lama was awarded the Nobel Peace Prize in 1989. In 2012, he relinquished political authority in his exile government and turned it over to democratically elected representatives. He is the author of numerous books, including The Good Heart, The Meaning of Life, The World of Tibetan Buddhism, and The Compassionate Life. --This text refers to an out of print or unavailable edition of this title.

4.7 out of 5 stars
4.7 out of 5
776 global ratings
How are ratings calculated?
To calculate the overall star rating and percentage breakdown by star, we don’t use a simple average. Instead, our system considers things like how recent a review is and if the reviewer bought the item on Amazon. It also analyses reviews to verify trustworthiness.

Mr Newman
5.0 out of 5 stars The best introduction to what the Buddha himself thought and taught
Reviewed in the United Kingdom on 29 June 2016
Verified Purchase
Want a well laid out anthology summarising what The Buddha actually said rather than other peoples well meant reinterpretations of what they think he said? Then buy this book. If you want to get as close as you can to what the Buddha actually taught to his followers and how he taught it then this is it. It is by far the best available overview of the original core Buddhist teachings from which all other strains of Buddhism developed. Discover the Buddhas actual teachings presented in his own words and introduce yourself to one of the most sensible, logical and genuinely life changing religions in existence. The philosophy outlined in this book is extraordinary and reading it will make a positive change to your outlook on life. The Pali canon is one of the oldest written records of the Buddhas words. It is also written in a language similar to that which the Buddha would have spoken. Therefore it is the most accurate record available of the words of one of the most remarkable human beings who ever lived. This is an excellent anthology of passages from the Pali Canon which gives a sound overview of its teachings organised into sections on each key theme. Buy it.
Read more
14 people found this helpful
Report abuse

Matt Jenkins
5.0 out of 5 stars A Fine Anthology
Reviewed in the United Kingdom on 16 January 2012
Verified Purchase
This volume is a valuable collection of teachings, arranged by theme, taken from the Pali Suttas. This work serves as both a fine introduction to the wider and voluminous Pali Suttas for those who are new to them and as a fine single volume summary for those already familiar with the work. Bhikkhu Bodhi has also, through the thematic structure he uses for his anthology, provided a helpful template and structure to aid the understanding of those who have read, or go on to read, the complete Suttas. The volume includes a useful introduction and each of the ten themed chapters is preceded by a helpful introduction/overview. The volume also includes useful notes and indices.

"A remarkable book. A gift to the world."
- Andrew Olendzki, Executive Director of the Barre Center of Buddhist Studies, in Buddhadharma: The Practitioner's Quarterly

Also of interest may be Bhikkhu Bodhi's wonderful collection of the Buddha's teachings specifically focusing on conflict resolution, interpersonal and social problem-solving, and the forging of harmonious relationships. These teachings are again drawn from the Pali Canon, and organized into ten thematic chapters.  The Buddha's Teaching on Social and Communal Harmony (Teachings of the Buddha)

The  Long Discourses of the Buddha: Digha-Nikaya  is also available in a translation by Maurice Walshe.
Read more
35 people found this helpful
Report abuse

Hannah
3.0 out of 5 stars Hard Going
Reviewed in the United Kingdom on 16 February 2019
Verified Purchase
Very good in its own right but hard going. An enjoyable, easier and insightful version of many of the major Sutras, in one book, is 'Awakening of the Heart' by Thich Nhat Hahn
Read more
6 people found this helpful
Report abuse

Amazon Customer
5.0 out of 5 stars Buddha Vacana
Reviewed in the United Kingdom on 27 November 2018
Verified Purchase
As I am yet to master the Pali language I greatly appreciate these translations of the early Buddhist teachings.
Delivery was well ahead of schedule.
Thank you
Read more
2 people found this helpful
Report abuse

S. Mark St.Ear
5.0 out of 5 stars A flavour of the Pali Canon
Reviewed in the United Kingdom on 23 March 2013
Verified Purchase
This is the book I've been looking for for a few years. It has selections from sutras ranging in length from a paragraph to a few pages. Arranged thematically in 10 chapters, Bikkhu Bodhi has done a magnificent job of presenting an overview of the Buddha's teaching. He introduces each chapter with an incisive introduction, and this book has left me better informed and hungry to explore the Pali Canon more extensively.
Superb!
Read more
3 people found this helpful
Report abuse
See all reviews
Get FREE delivery with Amazon Prime
Prime members enjoy FREE Delivery and exclusive access to movies, TV shows, music, Kindle e-books, Twitch Prime, and more.
> Get Started
Back to top
Get to Know Us
Make Money with Us
Let Us Help You
And don't forget:
© 1996-2020, Amazon.com, Inc. or its affiliates