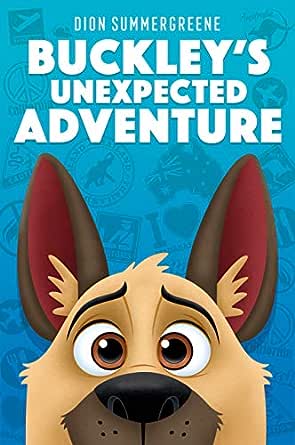 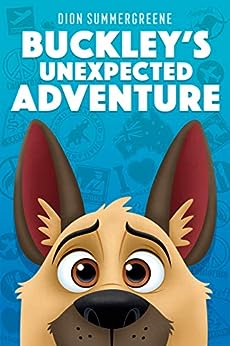 Buckley's Unexpected Adventure: One determined dog must follow his nose to put a stop to animal smuggling Kindle Edition

Sarah Fairbairn
4.0 out of 5 stars Buckley’s Unexpected Adventure reads like a Pixar movie and I mean that as a compliment.
Reviewed in Australia on 4 August 2019
In this new #LoveOzMG title, Buckley the detector dog discovers a crate of smuggled animals. He befriends the only surviving chameleon, this leads to a return smuggling plan of his own. Cue wacky hijinks, plane flights, run ins with other not so friendly animals, police chases, and unintentionally bringing down a major smuggling ring in a Bangkok shipping port.

Buckley’s Unexpected Adventure reads like a Pixar movie and I mean that as a compliment.
It’d make a hilarious movie. Think Zootopia, crossed with The Secret Life Of Pets, and Isle Of Dogs.

As an adult I can appreciate all the lessons Dion is trying to fit in about animal cruelty, illegal animal trade, animal facts and general life lessons as part of and in and around the plot. I do wonder if it will make the intended MG audience's eyes glaze over. If it will be information overload or if they’ll be enthralled by it, soaking it all up with their wonderfully young sponge brains - I hope for the later. And never the less the action sequences are fantastically entertaining and humorous.

The ending is super cute and of course the good guys win and it’s a happily ever for Buckley and his friends.

Jason
5.0 out of 5 stars Amazing Kids book
Reviewed in the United States on 8 June 2019
Verified Purchase
This is an amazing kids book.
Me and my family currently live overseas but are from Australia, and we loved the Aussie story. My daughter is only 7 and although reading a book like this is a bit above her level she followed the story with great interest. I highly recommend this book and hopefully look forward to seeing more of Buckley's Adventures in the future.
Read more
Report abuse
See all reviews
Back to top
Get to Know Us
Make Money with Us
Let Us Help You
And don't forget:
© 1996-2021, Amazon.com, Inc. or its affiliates