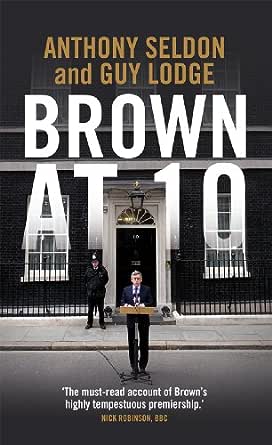 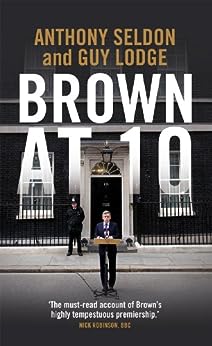 'A truly gripping and important book of contemporary history.' Robert Skidelsky 'The must-read account of Brown's highly tempestuous premiership.' Nick Robinson, BBC 'Brown At 10 is a must-read for anyone who wants to know what really happened in the final three years of the Labour government. Intelligent... judicious... it is chock full of revelations and provides a remarkably rich array of behind-the-scenes detail.' Andrew Sparrow, Guardian 'Superbly well-informed.' Daily Telegraph

GORDON BROWN's three years in power were among the most turbulent in Downing Street's post-war history. Brown at 10 tells the compelling story of his hubris and downfall, and with it, the final demise of the New Labour project. Containing an extraordinary breadth of previously unpublished material, Brown at 10 is a frank, penetrating portrait of a remarkable era, written by one of Britain's leading political and social commentators. Using unrivalled access to many of those at the centre of Brown's government, and original material gleaned from hundreds of hours of interviews with many of its leading lights, Brown at 10 looks with greater depth and detail into the signal events and circumstances of Brown's premiership than any other account published since the May 2010 general election. It also relates, for the first time, the full extraordinary tale of the pivotal role played by Brown in persuading the world's leaders to address the global banking crisis head-on. The result is the definitive chronicle of Gordon Brown's troubled period in Number 10, from the unique perspective of those who worked most closely with him.
click to open popover

William Podmore
4.0 out of 5 stars Useful account of a calamitous prime minister
8 February 2011 - Published on Amazon.com
This is a thorough account of Brown's calamitous three years in No. 10. Brown's worship of City speculators and contempt for production allowed a free for all buying and selling of Britain's industry and land for huge profits, assets sold abroad, farmers squeezed to bankruptcy by the big supermarkets. The authors omit the continuing effects of Brown's disastrous PFI policy, which has landed public service bodies with huge debts for the next 37 years.

They note, "research from both the Centre for Economics and Business Research and the Institute for Fiscal Studies later concluded that the VAT cut [in 2008] helped boost the economy by keeping consumer spending up." This proves the folly of the ConDem decision to raise VAT.

The authors point out that "Britain entered the recession with the deficit at 3 per cent of its GDP, which was not high by international standards." So, cutting the deficit need not be a priority.

It may have been the biggest bail-out the world has ever seen, but Brown let the bankers use the money to pay themselves vast bonuses. It may have been the biggest cut in interest rates, but the bankers still won't lend. And where is `the biggest reform of the international financial system'? Where are the new rules `governing banking remuneration', the promised `tough new principles on paying compensation'? Where is `the first comprehensive action against tax havens'? And where is the `new help for the poor'?

Brown talked a lot about the Millennium Development Goals, but what did he achieve? The G8 are nowhere near meeting their 2015 deadline for reaching these goals. The G8 were supposed to complete development-oriented trade talks in 2010, which never happened.

Brown and his G8 cronies lied that they would increase aid: 2009's shortfall was $26 billion. They lied that aid goes to the least developed countries: only 0.09 per cent went to the very poorest countries in 2008 (the latest year for which comprehensive data are available). Iraq got most, twice as much as Afghanistan (the second largest), which got 50 per cent more than Ethiopia (the third largest). Clearly, they use aid to prop up their wars. They lied that aid funds basic social services: only 20 per cent of aid in 2006-08 went to social services.

As the US Agency for International Development once admitted, "The principal beneficiary of America's foreign assistance programs has always been the United States." That is, most US aid money aids US corporations. The same here.

Brown was a disaster. The Labour government, with its PFIs, academy schools, tuition fees, marketising of the NHS, etc, paved the way for this savage ConDem government.


Read more
One person found this helpful
Go to Amazon.com to see all 1 reviews 4.0 out of 5 stars
Get FREE delivery with Amazon Prime
Prime members enjoy FREE Delivery and exclusive access to movies, TV shows, music, Kindle e-books, Twitch Prime, and more.
> Get Started
Back to top
Get to Know Us
Make Money with Us
Let Us Help You
And don't forget:
© 1996-2020, Amazon.com, Inc. or its affiliates