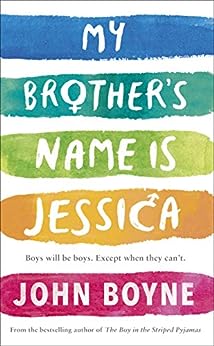 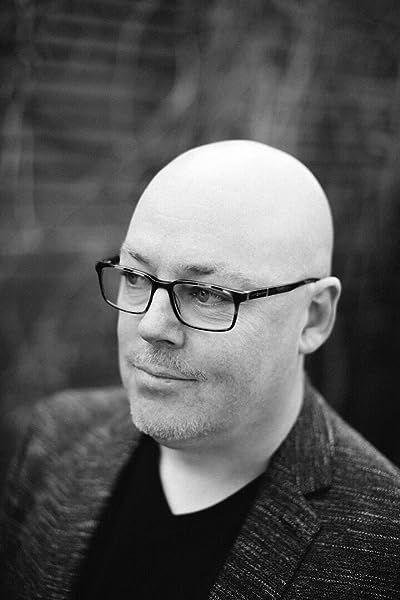 Both funny and moving... this is a must-read for all ages ― Irish Independent

...this poignant and disarming story is full of heart ― Attitude Magazine

John Boyne made his name with The Boy In The Striped Pyjamas and he's on stellar form in My Brother's Name is Jessica. A sensitively written and timely tale. ― Daily Express

It's all sorts of amazing ― TOTP --This text refers to the paperback edition.

A stunning and timely new novel from the bestselling and award-winning author of The Boy in the Striped Pyjamas --This text refers to the paperback edition.

John Boyne is the author of eleven novels for adults, five for young readers and a collection of short stories. Perhaps best known for his bestselling book The Boy In The Striped Pyjamas, John's other novels, notably The Heart's Invisible Furies, and A Ladder to the Sky, have been widely praised and are international bestsellers. He lives in Dublin. --This text refers to the paperback edition.
Read more

4.4 out of 5 stars
4.4 out of 5
196 global ratings
How are ratings calculated?
To calculate the overall star rating and percentage breakdown by star, we don’t use a simple average. Instead, our system considers things like how recent a review is and if the reviewer bought the item on Amazon. It also analyses reviews to verify trustworthiness.

Caitlin
2.0 out of 5 stars My Brother's Name is Jessica - by John Boyne
Reviewed in Australia on 11 May 2020
I listened to this as an audiobook.

Unfortunately, I hadn't read any of the reviews of this book before I bought myself a paperback copy -- the main reason I'd purchased it being that it sounded like I might like it and I liked the rainbow-type colours on the front.

I was wrong, however.

While I didn't hate this book, it also wasn't for me. After also having read some other reviews I've noticed that they're thinking along the same sort of lines that I am.

I didn't mind that the point of view was written by Jessica's younger brother, but it was definitely annoying when Same referred to his sibling as "my big brother, Jason" every single time he went to talk about Jason.

The story also isn't as much about Jessica, and more along the lines of Sam dealing with the information he's been given suddenly. Also really didn't like how their parents almost ignored them their entire lives up until the point where Jessica being hot news in the papers ruins their mother's chance at being P.M. -- that's when the parents finally wake up and realise that they've just handed their children off to a million other people besides themselves and now they're teenagers.

I do understand that Sam didn't necessarily understand what was going on as he had been brought up to essentially think that there was no such thing as transgender. However, whether you believe those that say they're transgender or think it's a bunch of bologna -- they exist and they are human beings just like you!

One part I really liked was when the coach of the school football team showed up and wanted to know whether Jason would be leaving the football team thanks to the rumours throughout the school about their family. The coach didn't see a male or a female on the team -- he saw a human being who was a damn good player who he didn't want to lose.
Read more
Helpful
Report abuse
See all reviews

zac weirs
5.0 out of 5 stars The backlash surrounding this book is hypocritical and unfair.
Reviewed in the United Kingdom on 19 April 2019
Verified Purchase
Before the book was even released, this book - by people who ask for freedom of speech and who preach their rights - tell people to boycott an authors' novel because he's not transexual himself.
John Boyne hasn't lived for over two hundred years - yet he wrote a book of someone who had.
He never lived next to Auschwitz and never befriended a Jewish boy where he'd sit and talk by a fence, yet he successfully wrote about it.
So how, I pose, does him writing from a young boy point of view - a perhaps naive boy offend people. Of course the character will be full of questions and struggle to understand it.
My brother's name is Jessica, if anything, provided young readers who perhaps are uneducated on this subject to learn more about the subject, and hopefully they'll be able to understand it, so their generation won't be similar to previous generations who had been against transexuals.
This book, i read in less than one day and was gripped from the first page. I for one learnt something and not once during it, did I read anything offensive.
John Boyne is a success novelist, and has spent his life honing the craft of writing, and for people to post harsh comments to him - something which forced him to delete his social media, is going against everything people fight for: freedom of speech.
Sam, our main character in this book is going through changes in his own life and has been told by his brother, that he thinks he might be his sister. He refers to Jason in the book as his brother because he can't quite understand it.
So before you criticise a book or the author for tackling a subject which people don't approve, read it first and understand that no author, not many anyway, write about situations they have been in.
This book, in my opinion (as I, like anyone, have the freedom to conclude it as such) was incredible and I would definitely reread it again.
Read more
66 people found this helpful
Report abuse

AmyRockChicMum
2.0 out of 5 stars A short book, doesn’t teach you much. Best suited to under 10 years old
Reviewed in the United Kingdom on 4 May 2019
Verified Purchase
I read this book despite all the bad press so that I can make my own judgement. I have a 13-year-old child who is transgender and I live in London and therefore should have found something in common with the characters in the book. Sadly not.
I know this is written for young adults but teenagers would probably find this too immature, it reads as if it’s been written by a 10-year-old not for one.
I’m still a huge John Boyne fan and love many of his other books. I honestly don’t feel as if he even wrote this himself - it’s so shallow.
The characters are quite comical and read like a farce. But because the subject matter is not suitable for this, it completely misses the mark. The transgender child in this story comes out to her family but her parents and siblings simply do not understand and a perfect opportunity to explain the issues further is left unexplored.
If you’re interested in reading a story and learning about what transgender families truly go through then this is not the right book.
Read more
13 people found this helpful
Report abuse

Sarah-Lou
4.0 out of 5 stars A sensitive subject handled with well balanced humour
Reviewed in the United Kingdom on 17 May 2019
Verified Purchase
Sam looks up to his older brother Jason, who provides him with the much needed attention he does not always get from his cabinet minister mother and his father, who is her adviser. Jason, who is older than Sam by four years is a popular kid at school, unlike Sam. Girls want to date him and boys want to b e his best mate. He finds time for Sam, helping him with his reading, which he finds tough due to Dyslexia. One day, Jason announces he was born in the wrong body and is in fact a girl.
This is a wonderful book, looking at a sensitive subject, yet doing so with a sprinkling of humour. It shows how Jason's decision to be open and honest affects not only him, but his parents and Sam. It highlights the prejudice Jason goes through and how cruel some people can be, yet in no way does it preach.
Read more
9 people found this helpful
Report abuse

NM
5.0 out of 5 stars *****
Reviewed in the United Kingdom on 24 June 2019
Verified Purchase
This book has been heavily criticised by transgender community for its allegedly insensitive title and there are numerous one star reviews on GR from people who admit to have never even read the book!
Well, I read it and despite the book being aimed at a younger audience, this is a wonderful and enlightening read with an important timely topic made accessible to a wide range of readers.

The book includes an Afterword from John Boyne explaining why he decided to write a book with a transgender character:

"The worst piece of advice anyone can give a writer is to write about what they know. Who wants to do something so limiting? One of the reasons I write is because I want to explore the lives of other people. I find it both interesting and challenging to write about what I don't know and to use my writing to learn about a subject, to understand it and to represent it as authentically as possible in order to help others make sense of it too."

I cannot agree more! There aren't enough books on this topic and I believe that books like this are educational if nothing else.

So please read the book and give it the rating it deserves.
Read more
5 people found this helpful
Report abuse

Mr. T. Harris
4.0 out of 5 stars A great book - but aimed at a younger audience
Reviewed in the United Kingdom on 4 May 2019
Verified Purchase
I was keen to read this book, and didn’t initially realise it wasn’t primarily aimed at an adult audience. I absolutely do think a Non trans person can write about trans issues. I thought some of the key characters (the parents) were almost pantomime villains - akin to the DUP, when in fact most UK politicians of all persuasions actually fall over themselves to out PC (Political Correct) each other. The story was actually very sweet and I would recommend it.
Read more
2 people found this helpful
Report abuse
See all reviews
Back to top
Get to Know Us
Make Money with Us
Let Us Help You
And don't forget:
© 1996-2021, Amazon.com, Inc. or its affiliates