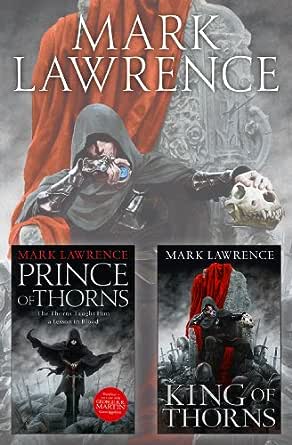 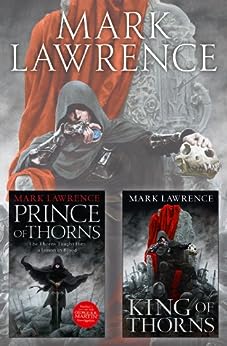 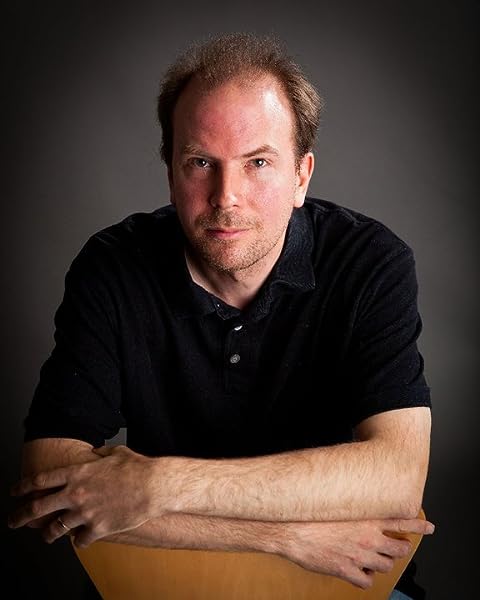 ‘Dark and relentless, Prince of Thorns will pull you under and drown you in story. A two-in-the-morning page turner. Absolutely stunning… jaw-dropping’
ROBIN HOBB

‘Excellent – on a par with George R.R. Martin’
CONN IGGULDEN

‘Lawrence’s poetic prose is amazing, far and away the best of the modern fantasy authors’
PETER V. BRETT

Books one and two of the critically-acclaimed debut fantasy trilogy The Broken Empire by Mark Lawrence.

This bundle includes Prince of Thorns and King of Thorns.

From being a privileged royal child, raised by a loving mother, Jorg Ancrath has become the Prince of Thorns, a charming, immoral boy leading a grim band of outlaws in a series of raids and atrocities. The world is in chaos: violence is rife, nightmares everywhere. Jorg has the ability to master the living and the dead, but there is still one thing that puts a chill in him. Returning to his father's castle Jorg must confront horrors from his childhood and carve himself a future with all hands turned against him.

Prince of Thorns and King of Thorns are the first two books in a remarkable new trilogy by one of fantasy fiction’s newest rising stars. Together, they weave a tale of blood and treachery, magic and brotherhood and paint a compelling and brutal, and sometimes beautiful, picture of an exceptional boy on his journey toward manhood and the throne.

Lazy Dai
TOP 500 REVIEWER
5.0 out of 5 stars Highly recommended mix of fantasy and sci-fi
15 July 2015
Format: Kindle EditionVerified Purchase
Set in Europe 1000 years after a devastating nuclear war, this is an original and inventive blend of fantasy and S-F. Why 5 stars? The style of writing is one reason - Mark Lawrence writes in a spare, laconic style with a dry wit and a mastery of understatement. Another is the way the characters (mainly the principal character, Jorg Ancrath, the disinherited “prince of thorns’) get out of difficult situations – there is no ‘with one mighty bound’ escape, rather clever foresight and a plausible solution which in retrospect has been hinted at earlier. Readers familiar with European geography will enjoy working out where is where (as Lawrence has changed the names a bit) although such familiarity is not a pre-requisite. Then there is a rich range of characters, mostly drawn in various shades of grey as the differences between good and evil are not always clear. And (last but by no means least) there is the fact that the trilogy has been finished so you will not have a frustrating wait until the final volume becomes available!
Read more
Helpful
Comment Report abuse
See all 1 customer reviews
Write a customer review

Anup
5.0 out of 5 stars Dark fantasy at its best
17 January 2014 - Published on Amazon.com
Format: Kindle EditionVerified Purchase
Superb dark fantasy, not your typical sugar coated fantasy where everything works out in the end.

If you like storylines which are gory and where heroes and favorites can die and are not supermen, then you need to read this...

Jeff Jurd
5.0 out of 5 stars Five Stars
25 September 2016 - Published on Amazon.com
Format: Kindle EditionVerified Purchase
Good quick read.
Read more
Go to Amazon.com to see all 2 reviews 5.0 out of 5 stars
Get FREE delivery with Amazon Prime
Prime members enjoy FREE Delivery and exclusive access to movies, TV shows, music, Kindle e-books, Twitch Prime, and more.
> Get Started
Back to top
Get to Know Us
Make Money with Us
Let Us Help You
And don't forget:
© 1996-2020, Amazon.com, Inc. or its affiliates