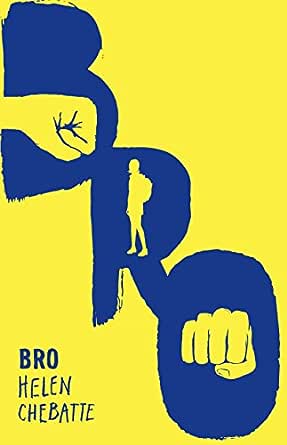 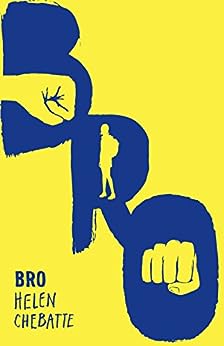 Helen Chebatte is a writer, actor and drama teacher living in Sydney. Growing up Syrian-Australian, Helen Chebatte is no stranger to the challenges of fitting in while remaining true to her cultural heritage. Throughout her childhood Chebatte was fascinated by the eclectic mix of lives and languages existing in the same community. It is this fascination that inspired Bro. Passionate and driven, Chebatte has written a unique and compelling story that delves into what it means to be young, confused and inundated with widely disparate views from teachers, family and of course your mates about what is important in life. Shedding light on the perenial issues of schoolyard violence, discrimination and lost purpose felt by so many teens, Chebatte’s well-researched and hard-hitting novel is a disturbingly realistic take on high school life.
click to open popover

From a YA novel called 'Bro' about a fight club and racial tensions with fists punching out the title on the cover, I was expecting ugly brutality: I was surprised with vulnerability and sensitivity. I thoroughly enjoyed Helen Chebatte's debut novel with its West Side Story feel, set in Western Sydney, with appealing and engaging main characters.

Using first person narration, Chebatte takes the reader behind the bravado of the main character, Lebanese Australian teenager Romeo, to expose his vulnerabilities. Set in a multicultural school Romeo is caught up in tensions that escalate after he starts dating a girl, and which end disastrously. With themes of identity, belonging, friendship, loyalty, peer pressure, racism, forgiveness and redemption 'Bro' certainly packs a punch!

Despite a lot of talk about fight club, there are actually only three fight scenes, each rendered effectively without too much gore and horror, however I was moved to tears at the outcome of the final fight, a testament to how engaged I was with the likeable characters.

The message of us all being Aussies despite our racial backgrounds is not so subtle, however in the shadow of the Cronulla riots, this is a message for our generation, and the refreshingly diverse voice in Aussie YA fiction is timely.

It is a pleasantly light read, dominated by dialogue and would be perfect as a middle school text.
Read more
Helpful
Comment Report abuse
See all reviews from Australia
Get FREE delivery with Amazon Prime
Prime members enjoy FREE Delivery and exclusive access to movies, TV shows, music, Kindle e-books, Twitch Prime, and more.
> Get Started
Back to top
Get to Know Us
Make Money with Us
Let Us Help You
And don't forget:
© 1996-2020, Amazon.com, Inc. or its affiliates