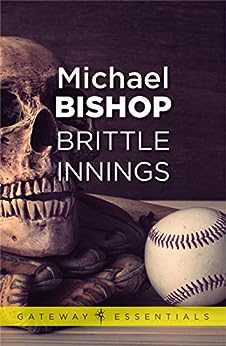 Michael Bishop (1945 - )Michael Bishop was born in 1945 in Lincoln, Nebraska. After receiving an MA in English from the University of Georgia, Bishop taught at the USAF Academy Preparatory School in Colorado, but soon began placing his short stories with the likes of Galaxy Science Fiction, If and The Magazine of Fantasy and Science Fiction. His first novel, A Funeral For The Eyes Of Fire, brought comparisons with Ursula Le Guin and James Tiptree, Jr and received a Nebula nomination. It was followed by a number of critically acclaimed works including BSFA Award-nominated Transfigurations, Arthur C. Clarke Award-nominated Ancient Of Days, and No Enemy But Time, for which he won the Nebula Award for Best Novel. Michael Bishop lives in Georgia, where he is writer-in-residence at LaGrange College. --This text refers to an alternate kindle_edition edition.

Runmentionable
5.0 out of 5 stars Diamond geezers, in more ways than one
Reviewed in the United Kingdom on 19 May 2017
Verified Purchase
While I haven't read all of Bishop's novels, the strange and rather lovely Brittle Innings is the best of those I have, and it's hard to see how anything could rival it as his best work.

It's currently available as an eBook in the VGSF Gateway series, but it's only science fiction in the sense that Bishop works in that genre, and it's less unlike SF than it is anything else. It's a kind of sequel to what some people consider the first true SF novel (I'm trying to avoid spoilers, but it's the one by Mary Shelley), but that's about as close as it gets to standard genre devices.

It's the story of a fish-out-of-water teenager who has no real talent for anything but baseball and finds himself on a professional, but Little League, baseball team in the Deep South in the early days of World War II. More specifically, it's about his friendship with another player, a hulking, monstrously strong and hideously scarred batter with an emphatically 19th century way of speaking and a hidden past he doesn't talk about. Following that Mary Shelley reference, you're way ahead of me, aren't you?

From that unlikely premiss, Bishop tells a gripping and well-paced story about growing up, family, friendship and prejudice of all sorts. The tone is frequently light but he doesn't flinch from uncomfortable scenes and issues, and there's a tragic inevitability to the events of the narrative. The 1940s milieu is convincingly portrayed and the baseball scenes are presumably authentic, though, as a Brit with little interest in our own sports, let alone souped-up rounders, the details were largely lost on me. The novel as a whole is moving but rigorously unsentimental, a difficult balance which Bishop achieves with considerable flair.

SF has many "neglected classics" in its history, but lots of them don't really deserve the description, due to awkward writing, dated technological references and unconscious cultural assumptions. Brittle Innings avoids all that, partly because it's only tangentially SF in the first place, but it probably deserves to be considered a neglected classic of a novel, full stop, regardless of genre. This unusual and highly affecting book is unreservedly recommended.
Read more
2 people found this helpful
Report abuse

Michael G Kurilla
4.0 out of 5 stars Minor league baseball, major league Gothic
Reviewed in the United States on 23 February 2021
Verified Purchase
Michael Bishop's Brittle Innings takes place over the course of a single baseball season during the dark days of WWII (1943). The main character is a shortstop, Danny Boles, too young to be drafted for the military, but old enough to drafted by a minor league baseball team. With a load of baggage from home, he finds solace in the game and the comradery of his teammates. His roommate, the first baseman, however steals the show as he is none other than Mary Shelly's (not the film version's) Frankenstein. Danny does a lot of growing up during that time and like America itself is slowly undergoing changes for the long term.

Bishop starkly displays the period with its inherent racism and misogyny with only a hint of changes to come. He deftly recounts the travels of Frankenstein that has him ending up playing the quintessential American pastime, such that this seems almost an obvious sequel. In the end, there are no winners or losers, merely a few survivors grieving for their losses.
Read more
Report abuse

Dave Wallace
5.0 out of 5 stars Stunning
Reviewed in the United States on 2 March 2020
Verified Purchase
Baseball and the nature of man, subtle and outrageous; throw in period history, characters and dialogue, you gotta read this.
Read more
Report abuse

george willis
4.0 out of 5 stars Brittle innings
Reviewed in the United States on 28 January 2015
Verified Purchase
An imaginative rendition of Shelley's anti hero in ww2 America. The characters show enough depth and life to keep the story interesting. The realism and honesty in their relationships was excruciatingly painful at times. Over all well written and at times thought provoking. Well worth the read.
Read more
2 people found this helpful
Report abuse

C. Bryant
5.0 out of 5 stars great book
Reviewed in the United States on 9 May 2013
Verified Purchase
I know Michael Bishop personally and he is a great man, this book is great too. I knew he wrote it so I had to read it. loved it . my father in law loved it too. great book about baseball
Read more
2 people found this helpful
Report abuse
See all reviews
Back to top
Get to Know Us
Make Money with Us
Let Us Help You
And don't forget:
© 1996-2021, Amazon.com, Inc. or its affiliates