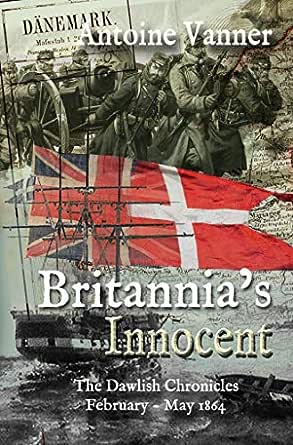 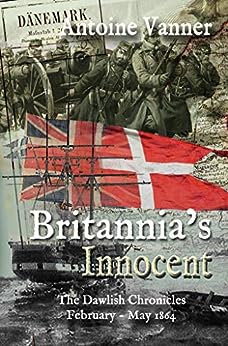 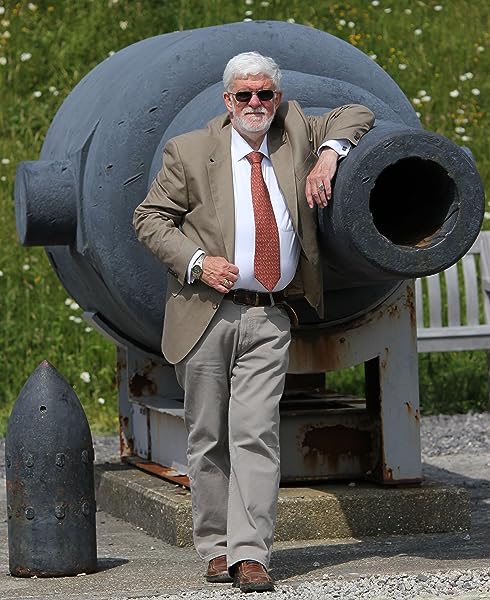 Naval adventure in the Victorian Era

1864 – Political folly has brought war upon Denmark. Lacking allies, the country is invaded by the forces of military superpowers Prussia and Austria. Cut off from the main Danish Army, and refusing to use the word ‘retreat’, a resolute commander withdraws northwards. Harried by Austrian cavalry, his forces plod through snow, sleet and mud, their determination not to be defeated increasing with each weary step . . .

Across the Atlantic, civil war rages. It is fought not solely on American soil but also on the world’s oceans, as Confederate commerce raiders ravage Union merchant shipping as far away as the East Indies. And now a new raider, a powerful modern ironclad, is nearing completion in a British shipyard. But funds are lacking to pay for her armament and the Union government is pressing Britain to prevent her sailing . . .

Denmark is not wholly without sympathizers however. Britain’s heir to the throne is married to a Danish princess. With his covert backing, British volunteers are ready to fight for the Danes. And the Confederacy is willing to lease the new raider for two months if she can be armed as payment for the lease, although the Union government is determined to see her sunk . .

Just returned from Royal Navy service in the West Indies, the young Nicholas Dawlish is induced to volunteer and is plunged into the horrors of a siege, shore-bombardment, raiding and battle in the cold North Sea – notwithstanding divided loyalties . . .

In other books of the Dawlish Chronicles series, Dawlish is met as an experienced and resourceful officer, but in 1864 he is still an innocent. But he will need to learn fast . . .This is the eighth volume of the Dawlish Chronicles historical naval fiction series – action and adventure set in the age of transition from sail to steam in the later decades of the 19th Century. It can be enjoyed as part of the series or as a standalone story. Britannia’s Innocent is more than a naval thriller, or a tale of war and military conflict, for it tells of the earlier years of Nicholas Dawlish, a Royal Navy officer who is more familiar with steam, breech-loaders and torpedoes than with sails, carronades and broadsides.Other volumes in this naval fiction series - Britannia's Wolf, Britannia's Reach, Britannia's Shark, Britannia's Spartan, Britannia's Amazon, Britannia's Mission and Britannia's Gamble, chart Dawlish's rise in the Royal Navy. As a boy in the late 1850s he joined a service still commanded by veterans of the Napoleonic Wars. But sail is yielding to steam, new technologies are creating new weapons and established international power-balances are shifting. Against the background of real historical events Dawlish has to confront challenges inconceivable to earlier generations of officers.

Why The Dawlish Chronicles Series?

“I’ve enjoyed historical naval fiction since I was introduced to C.S. Forester’s Hornblower books when I was a boy,” says author Antoine Vanner. “I’ve never tired since of stories of action and adventure by land and by sea. The Napoleonic era has however come to dominate the war and military fiction genre but the century that followed it was one no less exciting, an added attraction being the arrival and adoption of so much new technology. I’ve reflected this in the Dawlish Chronicles and for this reason I’m pleased that nautical author Joan Druett has described me as ‘The Tom Clancy of historical naval fiction.’ My novels have as their settings actual events of the international power-games of the period and real-life personalities usually play significant roles. Britannia’s Innocent is no exception, since it is set during the American Civil War period, and a key role is played the Confederate agent James Bulloch - classed by the Union State Department as “The most dangerous man in Europe”.

Carl E. Ramsey
5.0 out of 5 stars Warrior without a War
20 December 2019 - Published on Amazon.com
Verified Purchase
If you’re a warrior without a war, you can fight in someone else’s war—or risk being called a nobody. It’s a gamble, but the gamble appears a safe bet when you’re innocent, like Nicholas Dawlish (at the beginning of this story not too different from Frederic Henry in Hemingway’s, A Farewell to Arms.) When the gamble starts to cost lives of Dawlish’s comrades, also serving as mercenaries because they had no other employment, he finds he can’t back out because he gave his word and must maintain his honor—or he would really become a nobody. So, he gambles on in someone else’s war. In the end he may be one of the fortunate survivors, with only one part of his belief system as a casualty—his innocence.

It's a page turner from the beginning set against a little-known war, taking place the same time as the American Civil War. With great sense of storytelling irony, Antoine connects them without allowing a collision—just like in the finale.

Charles A. Seavey
5.0 out of 5 stars Dawlish on land and sea
21 December 2019 - Published on Amazon.com
Verified Purchase
Antoine Vanner's Dawlish Chronicles, chronologically speaking, got up as far as February, 1885 with Britannia's Gamble. The present volume backtracks to early 1864, with Nicholas Dawlish's participation in the war (called the Second Schleswig War) between Denmark on one side, and Prussia and Austria on the other. Saying the causes were complicated understates the situation considerably. Lord Palmerston, British Prime Minister at the time observed: “Only three people have ever really understood the Schleswig-Holstein business—the Prince Consort, who is dead—a German professor, who has gone mad—and I, who have forgotten all about it." Without getting into details, Dawlish signs on as a junior officer on the ironclad Galveston, also known as Odin. Another complication: Galveston was built for the Confederate navy, but for various reasons is on loan to the Danes for a short period before raising the Confederate flag. She is a powerful iron ship, armed with two massive 300 pounder Armstrong rifles- muzzle loaders, but not to be trifled with. These become Dawlish's responsibility. And he does get to use them.

But first... there is lengthy sequence of combat on land, as the Danes withdraw into a series of defensive positions as the Austrians and Prussians advance up the Jutland peninsula. For all that Dawlish is a seagoing man, Vanner has managed to get him involved in some arduous action on land in a number of the books. Usually these are cross-country treks under miserable conditions. In the case of Britannia's Innocent the action is straight up land warfare- infantry and artillery in pitched battles over the Danish defensive positions. I am reminded of Arturo Perez-Reverte's Captain Alatriste novel, The Sun over Breda. Eventually the action moves to sea, and Dawlish and the Armstrongs go to work in battle.

The action on both land and sea is vividly written. The protracted siege of the Danish positions does not hesitate to recount the less than glorious aftermath of each battle. The Butcher's Bill must be paid, and the details are pretty gruesome. Long before medevac, anesthesia, or germ theory for that matter, caring for the wounded was a grim business.

In many ways this is Dawlish's coming of age story. At the end he is no longer Britannia's Innocent, but a warrior, tried and true.

Rusty Edge
5.0 out of 5 stars An Important Back Story
14 December 2019 - Published on Amazon.com
Verified Purchase
In Nelson's Navy glory, honor, duty, and country seemed to be closely aligned. There were ample opportunities for senior officers to die and junior officers to distinguish themselves and advance because wars, fleet actions, gun decks, boarding parties and prize crews were plentiful. By Dawlish's day, there were a lot less of these things because of peace and the new technologies of steam, armor, and exploding shell . In Britannia's Innocent, he comes to terms with the new realities of his chosen career. Ambition, danger, and secrecy as a mercenary, or safety and idleness in the service of Queen and country? We get a look back at Dawlish's first service as a commissioned officer, an insight into his relationships with women, see his courage tested, and his efforts to balance duty with honor and humanity. As always, Vanner brings the places, technology, social movements and people of the period to life.
Read more
One person found this helpful

J. E. Dowdle
5.0 out of 5 stars Once again, Maybe Vanner's best! Just a really good book!
12 January 2020 - Published on Amazon.com
Verified Purchase
I have to say, I love this series. I wait for each new book and I read it as soon as it comes out, and it never disappoints. This is such a rich area of naval history that has rarely been visited, and Vanner is an extremely capable writer. I love the way he weaves his story around actual events, and I also love the way he acknowledges and embraces the impacts of technology on recent history, especially naval history. Finally, I just have to say that Vanner, as a writer, just keeps getting better. He was good at the start, but now his prose is lucid, succinct, and crisp, muscular where needed, delicate when that's required, and all in all extremely readable and enjoyable. If you haven't read any other books in the series, don't worry. Like other really good writers of serial fiction, Vanner makes each book stand easily on its own. So don't hesitate, dive on in. You'll enjoy the read!
Read more

R. Moore
5.0 out of 5 stars A fascinating story of an intersection between two wars taking place on sea and on land
19 December 2019 - Published on Amazon.com
Verified Purchase
Antoine Vanner presents us with a very exciting and readable story from early in the career of his series' hero, Nicholas Dawlish. And Dawlish is cast in a role in which he sees action both at sea on an early ironclad steamer and ashore in trench warfare that historically pre-figures the horror of World War I. These scenes of conflict are drawn from a short, small war in 1864 between Denmark and a union of Austria and Prussia. Most Americans have never heard of this war, but it provides an appropriate setting for Vanner to examine issues of honor and ambition that remain important to the author throughout Dawlish's long career. And it provides another setting for Vanner to lucidly explain the rapidly advancing technology of warfare in Victorian times. The second war? Let me only hint that Vanner has plausibly brought the American Civil War across the sea to have a role in this story.
Read more
Go to Amazon.com to see all 17 reviews 4.7 out of 5 stars
Get FREE delivery with Amazon Prime
Prime members enjoy FREE Delivery and exclusive access to movies, TV shows, music, Kindle e-books, Twitch Prime, and more.
> Get Started
Back to top
Get to Know Us
Make Money with Us
Let Us Help You
And don't forget:
© 1996-2020, Amazon.com, Inc. or its affiliates