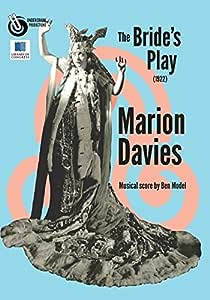 Set in Ireland, THE BRIDE'S PLAY, stars Marion Davies as Aileen, a young innocent lass who is enamored of the legends and tales of that land. Upon entering adulthood after growing up in a convent, she becomes enamored with a nobleman played by Wyndham Standing, but then falls for a romantic poet played by Carl Miller (The Kid, A Woman of Paris). After learning about the poet's hidden life, Aileen instead embraces her nobleman and agrees to marry him. In their lavish wedding ceremony she re-enacts the legendary "Bride's Play", in which the bride asks a line of men if they are her one true love. The poet races to attend the wedding in hopes that it is he, after all - and Aileen's one true love is revealed just in time.


Released January 1922, THE BRIDE'S PLAY features excellent cinematography, costume design and art direction, and is one of the string of 1921-22 Cosmopolitan Davies pictures that lead up to her breakthrough role in the star-making When Knighthood Was In Flower. The film is seen here in a scan from an archival 35mm print preserved by the Library of Congress, its original color tinting disitally restored, and features a new piano score by Ben Model.

Samantha Glasser
4.0 out of 5 stars Grassroots Project to Revive Davies' Worthy Career
26 August 2019 - Published on Amazon.com
The Bride's Play is a film set in Ireland where a young woman (Marion Davies) comes of age and toggles between two suitors, a poet playboy and an older wealthy friend of the family. Medieval history gives us a second role for Davies to play when it seems history may repeat itself. Hundreds of years before, a wedding was broken up because the bride did not love her arranged husband but instead ran off with her lover. Cosmopolitan pictures were notorious for lavish costumes and sets, and the historical segment gives ample opportunity to utilize them. The photography throughout the film is beautiful, one of the most striking examples being the shots of Davies silhouetted against the bright outdoor locations.

Davies made lots of great movies and only a few of her silent films had been revived in the home-video era until Ed Lorusso began using Kickstarter to fund the circulation of rare titles like this one. It is a worthy cause because although this film isn't a masterpiece, it is entertaining and an important piece of Davies' portfolio and film history.

Ben Model asserts on his Podcast that the score for a silent film should never distract the viewer from the story, and he achieves that goal here. The music is lovely and demure in the vein of traditional scores, which is refreshing in this era of "modern" music scores that attempt to draw in a younger audience at the expense of the films (I'm talking to you Mary Pickford Foundation!). Model is the man behind Undercrank Productions, the distributor of this disk. I highly recommend all of their releases.

David Olson
5.0 out of 5 stars Five Stars
25 July 2017 - Published on Amazon.com
This Undercrank edition has to be the best. The film looks glorious and the score is wonderful!
Read more
4 people found this helpful
Go to Amazon.com to see all 3 reviews 4.4 out of 5 stars