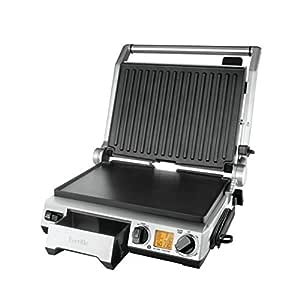 With An Intergrated Probe That Knows When Meat or Fish is Done and Tells You When To Take Them Off to Rest The Ultimate Grill. Five meat settings have programmed temperatures from rare to well done, with an intergrated probe that senses the precise temperature of your meat and indicates when it is time to take off to rest. Resting meat for 3 to 5 minutes allows the muscle fibres relax and for the juices and flavour to spread evenly throughout the meat without being lost on the first cut. During the rest phase, residual heat continues to cook the meat so it is important to take it off before it reaches the desired doneness. The Smart Grill Pro has a rest meat indicator that alerts you to remove your meat before it reaches its desired doneness, to prevent overcooking. In the past, removable plates meant easy cleaning, but also inferior heat resulting in chewy meat. Not anymore... With heating elements that embedded in the plates, not underneath them, and an electronic thermostat to sense small movements in temperature, this grill cooks seared and tender steaks twice as fast as a BBQ, and makes clean up a breeze. It can fold out flat to an open BBQ which doubles the cooking surface and features a PFOA free titanium infused non-stick surface, an LCD screen,adjustable temperature for everything from pancakes, toasted sandwiches to steaks, and adjustable plate height control. So now you can have your meat at the exact doneness you like and eat it too.

Kitchen appliances designed to inspire people to produce perfect food and beverage results in their own homes with ease. From espresso machines to food processors, the innovation in each appliance delights. Breville makes the process a pleasure and the end result perfect, every time.

The Ultimate 2400 Watt high sear grill with removable plates and open BBQ mode. Includes an integrated probe that senses the precise temperature of your meat and indicates when it is time to take off to rest, depending on your doneness preference.

Special Features of the the Smart Grill Pro:

Paul Tait
5.0 out of 5 stars Expensive but totally worth it
22 January 2019
Verified Purchase
I've showed the grill to a few friends and they just don't get how good this grill is. It's so well thought out and designed and all the features work really well. I'm discovering all sorts of new things to use it for and it sits on the cook top most of the time
Read more
One person found this helpful
Helpful
Comment Report abuse

Amazon Customer
4.0 out of 5 stars Good but not great
10 February 2019
Verified Purchase
Good for most cooking. Not easy to clean due to a low profile edge on the plates ( splattered oil all over the stainless) Being able to adjust the closing of the lid on things would also be handy. It has set locking points but not that useful. Would i buy again.... yeah
Read more
Helpful
Comment Report abuse

larry
4.0 out of 5 stars Grillers in the mist
22 January 2020
Verified Purchase
It is a grill,like the one I had, does the same job. I am happy with that.
Read more
Helpful
Comment Report abuse

Taryn
5.0 out of 5 stars Must have kitchen appliance
10 March 2019
Verified Purchase
Opens flat for double the cooking surface
Read more
Helpful
Comment Report abuse
There are 5 customer reviews and 6 customer ratings.
See all 5 customer reviews
Write a customer review
Get FREE delivery with Amazon Prime
Prime members enjoy FREE Delivery and exclusive access to movies, TV shows, music, Kindle e-books, Twitch Prime, and more.
> Get Started
Back to top
Get to Know Us
Make Money with Us
Let Us Help You
And don't forget:
© 1996-2020, Amazon.com, Inc. or its affiliates