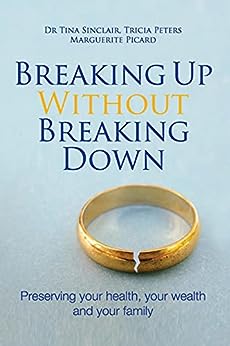 Breaking Up Without Breaking Down: Preserving Your Health, Your Wealth and Your Family Kindle Edition

'Breaking Up Without Breaking Down is an excellent resource for people who are thinking about divorce or who are in the process of separation and divorce. It covers not only the legal, financial and property aspects of divorce, but also the psychological and social impacts for all concerned.

This book is an essential read for couples who want a civilised separation and divorce without unnecessary conflict or expensive resort to the courtroom.'

'New ideas and new ways forward; all grounded in experience from professional practice and research. The best of guides for the journey.'

'In an increasingly polarised world, this book is timely and helpful for anyone who wants to choose a healthy path for their families as they move from one household to two households.

Clear and accessible, Sinclair, Peters and Picard have combined their extensive knowledge and shared it with the reader in a manner that allows the reader to directly benefit from the author's prolific experience in helping divorcing couples navigate the often difficult terrain of the modern divorce. Breaking Up Without Breaking Down will have a place of prominence in my client library.'