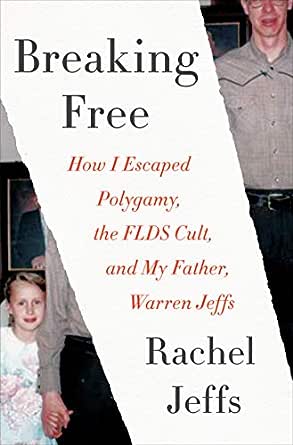 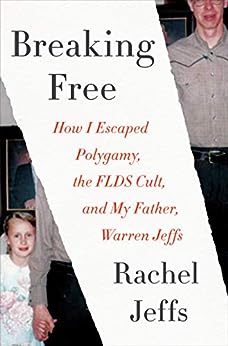 Breaking Free: How I Escaped Polygamy, the FLDS Cult, and My Father, Warren Jeffs Kindle Edition

In this searing memoir of survival in the spirit of Stolen Innocence, the daughter of Warren Jeffs, the self-proclaimed Prophet of the FLDS Church, takes you deep inside the secretive polygamist Mormon fundamentalist cult run by her family and how she escaped it.

Born into the Fundamentalist Church of Jesus Christ of Latter-Day Saints, Rachel Jeffs was raised in a strict patriarchal culture defined by subordinate sister wives and men they must obey. No one in this radical splinter sect of the Mormon Church was more powerful or terrifying than its leader Warren Jeffs—Rachel’s father.

Living outside mainstream Mormonism and federal law, Jeffs arranged marriages between under-age girls and middle-aged and elderly members of his congregation. In 2006, he gained international notoriety when the FBI placed him on its Ten Most Wanted List. Though he is serving a life sentence for child sexual assault, Jeffs’ iron grip on the church remains firm, and his edicts to his followers increasingly restrictive and bizarre.

In Breaking Free, Rachel blows the lid off this taciturn community made famous by Jon Krakauer’s bestselling Under the Banner of Heaven to offer a harrowing look at her life with Warren Jeffs, and the years of physical and emotional abuse she suffered. Sexually assaulted, compelled into an arranged polygamous marriage, locked away in "houses of hiding" as punishment for perceived transgressions, and physically separated from her children, Rachel, Jeffs’ first plural daughter by his second of more than fifty wives, eventually found the courage to leave the church in 2015. But Breaking Free is not only her story—Rachel’s experiences illuminate those of her family and the countless others who remain trapped in the strange world she left behind.

A shocking and mesmerizing memoir of faith, abuse, courage, and freedom, Breaking Free is an expose of religious extremism and a beacon of hope for anyone trying to overcome personal obstacles.

Rachel Jeffs—daughter of Warren Jeffs, the self-proclaimed Prophet of the Fundamentalist Church of Jesus Christ of Latter-Day Saints—writes about her life inside, and triumphant escape from, a dangerous cult that still holds thousands in its thrall.

Rachel Jeffs grew up at her father’s side as he attained power and ultimate control of the FLDS Church, a strict patriarchal culture where the women are subordinate to the men, and everyone is at the mercy of an increasingly unstable Prophet. Living outside mainstream Mormonism and federal law, Warren Jeffs established a cult in which members are brainwashed to do his bidding; underage girls are married to men they don’t know; parents are separated from their children; and people are cast out forever at the Prophet’s merest whim. Even after the FBI placed Warren Jeffs on its Ten Most Wanted List and he received a life sentence for child sexual assault, Jeffs’s iron grip on the church remains firm and his edicts to his followers grow increasingly restrictive and bizarre.

In Breaking Free, Rachel Jeffs offers a stunning look at life inside this notorious cult from the unique perspective of being both the favorite of Warren Jeffs’s more than fifty children and the object of his most depraved “revelations.” Compelled into an arranged polygamous marriage, locked away in “houses of hiding” as punishment for perceived transgressions, and physically separated from her children, Rachel—Jeffs’s first plural daughter by the second of his more than seventy wives—eventually faced a terrible decision: Should she stay in this hell, or should she leave everything and everyone she’d ever known?

A shocking and mesmerizing story of faith, abuse, and courage, Breaking Free is both an exposé of religious extremism and a portrait of extraordinary resilience.

Tash
5.0 out of 5 stars AMAZING
23 October 2018
Format: Kindle EditionVerified Purchase
This story is both factual and informative. What these women and children endured at the hands of a monster they trusted, is heartbreaking. What they believed they worshipped was not religion, it was brainwashing, manipulation and plain and simple a cult! I mostly read true crime, but this book has opened me up to whole different genre. I would recommend this book to anyone who wants to know the truth about Warren Jeffs and how he manipulated and took the innocence from so many people.
Read more
Helpful
Comment Report abuse

Loxy
5.0 out of 5 stars If you like real-life stories about cults then this is the book for you!
9 April 2018
Format: Kindle EditionVerified Purchase
I love true stories about people growing up in cults and this one did not disappoint. It's easy to judge everything about these cults as bad from the outside, and to an extent a lot of it is truly horrible. However, this book allows you to peek inside and see what it's like growing up in such a cult (the good and the bad) and it's well worth the read!
Read more
Helpful
Comment Report abuse

Britney
5.0 out of 5 stars Amazing book!! Read from start to finish in one day!
3 January 2018
Format: Kindle EditionVerified Purchase
Could not fault this book... An amazing and detailed account of what life was like growing up and raising children in a cult like this, and the challenges faced by women particularly. Loved this book!
Read more
Helpful
Comment Report abuse

Chandy Shah
5.0 out of 5 stars Could not put this book down!
17 February 2018
Format: Kindle EditionVerified Purchase
It has been a long time since I found a book that had me reading up until 2am on work nights. Her story is harrowing at times but proves that true love always speaks truth.
Read more
Helpful
Comment Report abuse

Jeanine French
5.0 out of 5 stars Loved it!
7 January 2018
Format: Kindle EditionVerified Purchase
I loved how open and raw Rachels account of her life was—-she takes you on her journey with her and how hard life was for her whilst managing to still keep the story upbeat!
Read more
Helpful
Comment Report abuse

Taran Marley
5.0 out of 5 stars Really interesting story told simply and neatly
17 December 2019
Format: Kindle Edition
This is a simple work detailing the horrors of the flds church. It's simplicity reinforces the truth behind the chilling tale of life within a brutal church. Nema
Read more
Helpful
Comment Report abuse
There are 8 customer reviews and 9 customer ratings.
See all 8 customer reviews
Write a customer review

Go to Amazon.com to see all 237 reviews 4.7 out of 5 stars
Get FREE delivery with Amazon Prime
Prime members enjoy FREE Delivery and exclusive access to movies, TV shows, music, Kindle e-books, Twitch Prime, and more.
> Get Started
Back to top
Get to Know Us
Make Money with Us
Let Us Help You
And don't forget:
© 1996-2020, Amazon.com, Inc. or its affiliates