The Breakdown and over 1.5 million other books are available for Amazon Kindle . Learn more
Share <Embed> 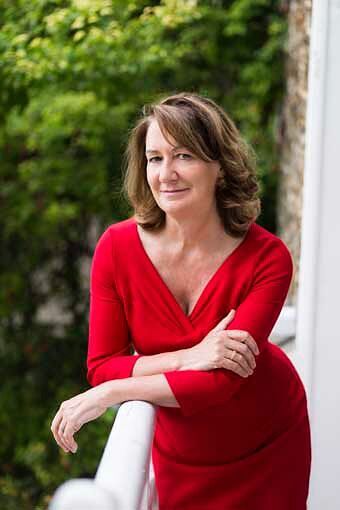 Page 1 of 1 Start overPage 1 of 1
This shopping feature will continue to load items when the Enter key is pressed. In order to navigate out of this carousel please use your heading shortcut key to navigate to the next or previous heading.
Back
Next
Start reading The Breakdown on your Kindle in under a minute.

We loved what narrator Georgia Maguire did with Paris's Behind Closed Doors. AudioFile, Editors' Pick

Narrator Georgia Maguire's soft British accent is an absolute listening pleasure. ...Questions are eventually answered, and the mystery resolved, but it is the texture and tension provided by Maguire's skillful delivery and beguiling voice that make this a successful audio offering. - AudioFile

B. A. PARIS is the New York Times and internationally bestselling author of Behind Closed Doors, The Breakdown, Bring Me Back, The Dilemma, and The Therapist. She grew up in England but has spent most of her adult life in France. She has worked both in finance and as a teacher.

4.3 out of 5 stars
4.3 out of 5
2,850 global ratings
How are ratings calculated?
To calculate the overall star rating and percentage breakdown by star, we don’t use a simple average. Instead, our system considers things like how recent a review is and if the reviewer bought the item on Amazon. It also analyses reviews to verify trustworthiness.

Aleasha
4.0 out of 5 stars Another great book by B.A. Paris!
Reviewed in Australia on 14 February 2018
Verified Purchase
If you can’t trust yourself, who can you trust?

Since reading 'Behind Closed Doors' by B.A Paris (her debut), I was very much looking forward to reading 'The Breakdown', and she did not disappoint!

The book's main character Cass was driving home one stormy night after a night out with work friends when she notices a car pulled over in the middle of a downpour, with a woman inside. Cass pulls over and flashes her lights at the woman to see if she needs help or will get out of the car, but when nothing happens and due to pouring rain, Cass mistakenly drives off, leaving the woman there.

The next morning after this unsettling encounter, Cass finds out that the woman in the car the previous night has been murdered. Due to leaving the scene, Cass cannot stop thinking about it and wondering whether she should have done more. Furthermore, Cass begins to start forgetting every little thing, when deliveries start appearing on her doorstep that she supposedly bought, signing for new alarm systems that she can't remember buying and even forgetting where she parked her car, two hours prior.

The combination of all these things, worrying about early onset dementia and Cass receiving heavy breathing cold calls, makes her think perhaps with a murderer on the loose, not only is she going crazy, but she's being watched and is the next target of the murderer.

I desperately wanted to skip to the end so I could find out what was going on, but exercised my self control and refrained. I'm glad I did, because the novel certainly kept me on my toes and I kept changing my mind, thinking 'oh she is going crazy' to 'she's not crazy, is she?'.

Another great book by B.A. Paris!

John de Biker
1.0 out of 5 stars Broken down OK
Reviewed in Australia on 2 March 2019
Verified Purchase
This was in my opinion one of the worst books I have read and the first in all the years that I abandoned halfway through and the first on my Kindle to be put to the sword!
Read more
2 people found this helpful
Helpful
Comment Report abuse

Ladymajik
5.0 out of 5 stars A Modern Thriller
Reviewed in Australia on 5 July 2017
Verified Purchase
My second book by this author. Thoroughly enjoyed this gripping modern read. Lots of twists and turns. If you enjoyed Behind Closed Doors this book will not disappoint.
Read more
Helpful
Comment Report abuse

Maree Beswick
3.0 out of 5 stars I was getting bored BUT..
Reviewed in Australia on 31 January 2019
Verified Purchase
Loved this book - very clever. Knew something had to happen soon and I really enjoyed the twist
Read more
One person found this helpful
Helpful
Comment Report abuse

D Baker
5.0 out of 5 stars Gripping read
Reviewed in Australia on 19 February 2019
Verified Purchase
Lots of intrigue although it dragged on a bit in places
Read more
Helpful
Comment Report abuse
See all reviews

JMB
1.0 out of 5 stars Struggled through the middle chunk ...
Reviewed in the United Kingdom on 26 November 2017
Verified Purchase
I enjoyed the beginning & the end, the middle was, dull, repetitive & boring. Plot was far too obvious from the beginning. I was over the moon as the writing format changed, (no more full pages of text) I was able to gallop to the finish line. Really enjoyed Behind Closed Doors, won't be bothering with the next book, unless BA Paris ups the game.
Read more
13 people found this helpful
Report abuse

Curly
1.0 out of 5 stars Very disappointing
Reviewed in the United Kingdom on 11 August 2018
Verified Purchase
This book was truly dreadful - it was so similar in style to before I go to sleep but nowhere near as good. It was predictable and tedious and I skimmed through the middle section hoping that it would redeem itself at the end however the reasoning for Jane's death was just ridiculous and the conclusion very unsatisfying. Don't waste your time, I definitely wish I hadn't.
Read more
11 people found this helpful
Report abuse

Fermar
1.0 out of 5 stars Shockingly Bad
Reviewed in the United Kingdom on 19 February 2018
Verified Purchase
This really is a very poor book with a weak plot and a fairly obvious lack of research: nothing about the story is in any way believable. I am really surprised that there is a real lack of evidence that an editor has worked on this; it reads like a very rough first draft in need of a great deal of work. In short, it's a shocker!
Read more
12 people found this helpful
Report abuse

sopiro
3.0 out of 5 stars Repetition, repetition, repetition
Reviewed in the United Kingdom on 30 September 2019
Verified Purchase
I really enjoyed Behind Closed Doors, and Bring Me Back, however, this was a very difficult book to finish. The middle section where everything happened at least 12 times was so overwhelmingly boring that for the first time in my life I skimmed through the pages in a novel, 100% sure that I wasn't missing anything. The Edgar Allan Poe-esque focus on Cass' fear every time the phone rings... blah. When I got so tired with nothing happening, I was still around 35%. I think this has significantly affected my decision to read any future BA Paris novels.
Read more
4 people found this helpful
Report abuse

Carolyn Holmes
3.0 out of 5 stars predictable
Reviewed in the United Kingdom on 25 September 2017
Verified Purchase
Although the book was very well writren, I had worked out the plot twist in ths first few chapters and was hoping I was wrong because I wanted a "wow!" moment. Sadly, everything turned out the way I guessed and the ending came up short.

If you want a page turner and aren't looking to use too much of your brain, i'd give this book a go.
Read more
7 people found this helpful
Report abuse
See all reviews
Get FREE delivery with Amazon Prime
Prime members enjoy FREE Delivery and exclusive access to movies, TV shows, music, Kindle e-books, Twitch Prime, and more.
> Get Started
Back to top
Get to Know Us
Make Money with Us
Let Us Help You
And don't forget:
© 1996-2020, Amazon.com, Inc. or its affiliates