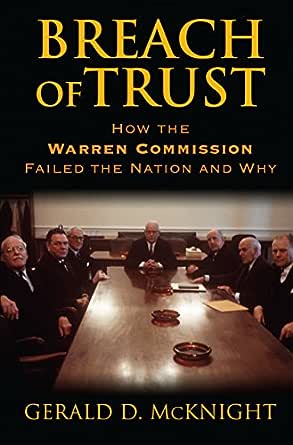 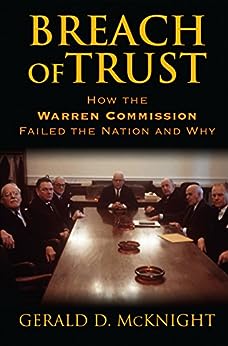 Breach of Trust: How the Warren Commission Failed the Nation and Why Kindle Edition

"Fifty years from now, writers may still be grinding out new studies and theories about the Kennedy assassination. If so, Breach of Trust probably will be one of their important starting points."--Dallas Morning News

"McKnight's meticulous and well written book manages to expose the political bias that infiltrated so much of the Warren Commission's methods."--Law and Politics Review

"This lucid and persuasive critique of the official version of the assassination is the best book on the subject in years."--Salon.com

"The Warren Commission Report on the assassination of President John F. Kennedy . . . was instantly implausible because the authors hid the secrets they knew (and ignored the ones they didn't)."--David Ignatius, Washington Post Book World

"A shrewd, well-researched, deeply provocative investigation into the gross delinquencies of the Warren Commission. Essential reading."--Douglas Brinkley, author of Cronkite

"It's impossible in brief to do full justice to McKnight's persuasive study, which adds immeasurably to our knowledge of the assassination and ensuing investigation."--Michael L. Kurtz, author of The Crime of the Century: The Kennedy Assassination from a Historian's Perspective

"Reopens old questions and poses new challenges to the 'official story.' No one interested in the Kennedy 'case' can afford not to read it."--Lloyd C. Gardner, author of The Case That Never Dies: The Lindbergh Kidnapping

The Warren Commission's major conclusion was that Lee Harvey Oswald was the "lone assassin" of President John F. Kennedy. Gerald McKnight rebuts that view in a meticulous and devastating dissection of the Commission's work.

The President's Commission on the Assassination of President Kennedy was officially established by Executive Order to investigate and determine the facts surrounding JFK's murder. The Warren Commission, as it became known, produced 26 volumes of hearings and exhibits, more than 17,000 pages of testimony, and a 912-page report. Surely a definitive effort. Not at all, McKnight argues. The Warren Report itself, he contends, was little more than the capstone to a deceptive and shoddily improvised exercise in public relations designed to "prove" that Oswald had acted alone.

McKnight argues that the Commission's own documents and collected testimony—as well as thousands of other items it never saw, refused to see, or actively suppressed—reveal two conspiracies: the still very murky one surrounding the assassination itself and the official one that covered it up. The cover-up actually began, he reveals, within days of Kennedy's death, when President Johnson, FBI Director J. Edgar Hoover, and acting Attorney General Nicholas Katzenbach all agreed that any official investigation must reach only one conclusion: Oswald was the assassin.

While McKnight does not uncover any "smoking gun" that identifies the real conspirators, he nevertheless provides the strongest case yet that the Commission was wrong—and knew it. Oswald might have knowingly or unwittingly been involved, but the Commission's own evidence proves he could not have acted alone.

Based on more than a quarter-million pages of government documents and, for the first time ever, the 50,000 file cards in the Dallas FBI's "Special Index," McKnight's book must now be the starting point for future debate on the assassination.

Among the revelations in Breach of Trust:

The Commission's evidence was never able to place Oswald at the "sniper's nest" on the sixth floor at the time of the shooting.

JFK's official death certificate, signed by his own White House physician and contradicting the Commission's account of Kennedy's wounds, was left out of the official record.

The dissenting views of the naval doctors who performed the autopsy and those of the government's best ballistic experts were kept out of the official report.

Oswald was probably a low-level asset of the FBI or CIA or both.

Commission members Gerald Ford (for the FBI) and Allen Dulles (for the CIA) acted as informers regarding the Commission's proceedings.

Mr. K. D. Cooper
5.0 out of 5 stars Treason?
20 May 2015 - Published on Amazon.com
Verified Purchase
The title of this book is the basic definition of "treason". As an amateur student of the assassination I readily admit to feeling of anger for the condemnation of a "lone nut" for the assassination - Lee Harvey Oswald. And even more so because no less a person than the chief justice of the US Supreme Court condemns him, without trial, and without being able to defend himself, as he too was assassinated 2 days after Kennedy's murder. He was indeed a "patsy".
My anger is further stirred by being mystified as to how the commissioners could, in a "conclusion" of about 900 words, blatantly condemn Oswald when 26 volumes of evidence being the real substance of the report say otherwise. I would argue that this provides prima facie evidence for the impeachment of the commissioners. But unlike the commissioners themselves I would not condemn them without the proper procedures being adopted, particularly their being given all the rights that were denied Oswald.
In particular I would considering a case for the impeachment of the chairman - Earl Warren. I would refer readers to "definitions" in the website uslegal.com Go to "abuse of discretion". There is a general article on the subject. At the end there a a series of click-ons.
On the basis of those definitions, what should have happened back then is then that impeachment proceedings should have been considered. But, naturally, no firm action should have been taken against the Chief Justice without the proper procedures of justice being taken.
All of which was denied Lee Harvey Oswald in the report of the Commission chaired by Chief Justice Earl Warren.

TLR
5.0 out of 5 stars A masterpiece
24 February 2013 - Published on Amazon.com
Verified Purchase
Perhaps the single best book demolishing the official "lone nut" story. McKnight was a student of Harold Weisberg, and relied heavily on his research (Weisberg's files are now online at Hood's website). In fact, I think this is the book Weisberg wanted to write but never did.

McKnight explains, "The government's own documents establish the transparent truth that Oswald did not kill President Kennedy."

"Where there is no mystery, no shadow of a doubt, is that planning for provocation to justify major US military action against Cuba was a persistent theme in some government circles, most notably the Joint Chiefs of Staff and the CIA, during the Kennedy presidency."

In regard to the early leaking of stories to the press about Castro being behind the assassination: "The unappreciated irony in this whole business was that the first JFK conspiracy theory to find its way into print was paid for by George E. Joannides, a CIA psychological warfare specialist."

Dennis Maugere
5.0 out of 5 stars Superior treatment of "controversial" subject matter reflecting the professionalism of ...
20 April 2015 - Published on Amazon.com
Verified Purchase
Superior treatment of "controversial" subject matter reflecting the professionalism of a traditional scholar who continuously demonstrates that scrupulous research, assessment, and analysis is capable of revealing many reliable conclusions simultaneously about the most politicized
era in modern American history. Professor McKnight is one of the few genuine scholars of the first Kennedy assassination and the commission
that substituted too many sham efforts instead of remaining true to the normal protocols used in something as standard as accurate representation
of an individual's comments in an affidavit, or testimony given to commission researchers, or the same given to members of the Commission the few times they convened as a group in search of the facts and the truth of the events that unfolded 11-22-63 to 11-25-63.

Any serious citizen expecting honest scholarly conception and absolutely rigorous pursuit of pertinent documents and reliable conclusions derived therefrom, must read Dr. McKnight's, " Breach of Trust: How the Warren Commission Failed the Nation and Why."

Retired Guy
4.0 out of 5 stars Restrained, well documented story of a flawed investigation
27 March 2006 - Published on Amazon.com
Verified Purchase
McKnight's book contains little that is "news" those familiar with this case. This is not a book of new disclosures, or examinations of trails gone cold, but perhaps something that will be valued more for it's refusal to move outside it's narrow focus: the conduct of the Warren Commission, and it's relationship with the various investigatory agencies and the handling (and mis-handling) of those who testified and their information. This is a "safe" book, in that there is no speculation (or even examination) of the motives of the WC or possible explanations for the many gaffs pointed out in the committee operations. This is a well documented examination of the flaws in the structure and function of the WC , and ultimately an interesting book for those students of history or government who may be less interested in the results than in the process. This is Meagher or Weisberg without the passion, but very well documented, and of use to those seeking a more recent view of WC activities and participants based on current information.
Read more
9 people found this helpful

Kace Aces
5.0 out of 5 stars Thorough Analysis of Warren Report Errors
11 March 2016 - Published on Amazon.com
Verified Purchase
McKnight demolishes the work of the Warren Commission, point by point, in exquisite detail. The lies, withheld evidence, and incompetent autopsy are all spelled out. After reviewing the facts there can be no doubt that the Warren Report was pure propaganda, all bun and no beef.
Read more
One person found this helpful
Go to Amazon.com to see all 33 reviews 4.2 out of 5 stars
Get FREE delivery with Amazon Prime
Prime members enjoy FREE Delivery and exclusive access to movies, TV shows, music, Kindle e-books, Twitch Prime, and more.
> Get Started
Back to top
Get to Know Us
Make Money with Us
Let Us Help You
And don't forget:
© 1996-2020, Amazon.com, Inc. or its affiliates