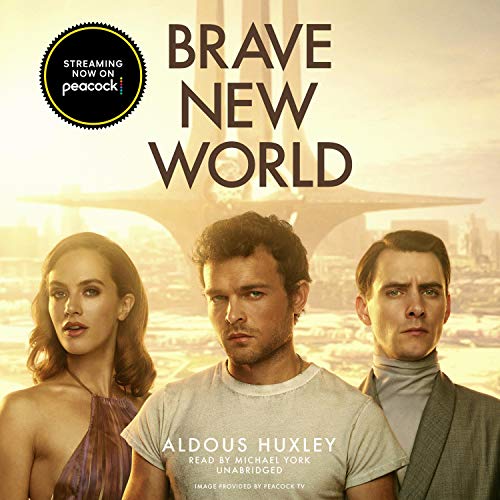 4.5 out of 5 stars
4.5 out of 5
14,353 global ratings
How are ratings calculated?
To calculate the overall star rating and percentage breakdown by star, we don’t use a simple average. Instead, our system considers things like how recent a review is and if the reviewer bought the item on Amazon. It also analyses reviews to verify trustworthiness.

megan
TOP 50 REVIEWER
4.0 out of 5 stars INTERESTING AND RELEVANT
Reviewed in Australia on 11 July 2018
Verified Purchase
Bleak is the word that comes to mind when I think of this novel. I first read 'Brave New World' as an impressionable fifteen year-old girl and was equal parts horrified and despondent.
Typically, Huxley wrote in a dramatic style and he was always brilliant with language. BNW isn't his best book, imo (hence 4 stars), but this modern classic, parody remains impactful, profound and relevant - considering the direction today's world has taken (the discussion possibilities are certainly wide).
The strong theme is: industrialisation and how it's altered and taken control over society, negating the need for individualism.
From Huxley's perspective, post WW1 was a world without heart and soul. His main source of despair was Henry Ford's influence and as a sensitive, passionate and creative artist, he mourned the loss of freedom in this new, consumer-driven, factory powered, Big Brother society.
The setting for BNW was London, around seven hundred years AF. (After Ford, instead of AD...such was Ford's influence, in Huxley's eyes.) It depicted the need for status quo - for the greater good of 'the community'. This included: absolute goverment control, total automation, loss of human connection, no need of committment, manufactured babies (Eugenics), mind-control methods (including the common use of feel-good drugs), a deliberately created caste system, specific and unquestioned work roles, the devaluation of elderly citizens etc. In BNW an abundance of leisure time encouraged people to be consumers and thereby, become increasingly reliant on 'the system' (never questioning because of mind conditioning...and round and round it goes).
However, even within BNW, some felt displaced, wanted to challenge and ultimately rebel. These characters, their thought-provoking dialogue and their actions were Huxley's means of expressing his fears, grief, disgust and defiance. What a powerful message, and yes, as an adult (no longer the girl), I do see parallels in 2018, sadly.

MrCarlSir
5.0 out of 5 stars Huxley was very forward-thinking!
Reviewed in Australia on 17 November 2020
Verified Purchase
Although I don't believe humanity would go quite this far, there are things happening scientifically in the book which were not happening when the book was written.
Huxley captures people very well, the blind followers, the easily-manipulated, the crushing of those who speak up, the leaders holding on to power...it was disturbing in places but excellent.
Read more
Helpful
Report abuse

Cher
4.0 out of 5 stars A scary reflection!
Reviewed in Australia on 9 March 2019
Verified Purchase
First read this book many years ago as part of an English assignment in school, happy to find it as an ebook. Far fetched it may have been back then but eerily it reflects what is happening in our world today. A good read but be aware that although it’s fiction it’s not so far fetched anymore.
Read more
Helpful
Report abuse

Kindle Customer
5.0 out of 5 stars Highly recommend
Reviewed in Australia on 6 October 2020
Verified Purchase
Fantastic! Absolutely adore this work and would recommend to any reader! Gave me chills but in the best kind of way! Definitely a keeper for my little library!
Read more
Helpful
Report abuse

malbrown2
4.0 out of 5 stars Huxley was ahead of his time
Reviewed in Australia on 28 December 2014
Verified Purchase
This book is really a classic. It's remarkable to think Aldous Huxley had the foresight to write about our society and it's structure in world controlled by a unique form of government that was completely non representative of the people.
Well worth a read and beware the sad ending.
Read more
One person found this helpful
Helpful
Report abuse

Neil McVea
4.0 out of 5 stars Well worth the Read.
Reviewed in Australia on 16 September 2015
Verified Purchase
At Over 80 this was the first time I had read the book; had been aware of it over the years but never got around to reading it; intrigued by the author's glimpses of the Future, and how logical (?) his reasoning for the Perfect Civilisation.
Read more
2 people found this helpful
Helpful
Report abuse

Martin
5.0 out of 5 stars Hedonism being the meaning of life
Reviewed in Australia on 14 December 2019
Verified Purchase
The world expolored in this book has plenty of parallels to our own, which makes the reader question how far the pursuit of pleasure can go and what the cost to humanity will be.
Read more
Helpful
Report abuse

Jo Jo
5.0 out of 5 stars Brilliant!!!
Reviewed in the United Kingdom on 24 August 2020
Verified Purchase
Quite depressing but so timely accurate. Everyone should read it - together with 1984 - G. Orwell.
Read more

5.0 out of 5 stars Brilliant!!!
Reviewed in the United Kingdom on 24 August 2020
Quite depressing but so timely accurate. Everyone should read it - together with 1984 - G. Orwell.
Images in this review

Pchat
5.0 out of 5 stars Everyone is happy nowadays!
Reviewed in the United Kingdom on 9 April 2017
Verified Purchase
It's quite extraordinary to think this book was first published in the early 1930s. Parts of it feel just around the corner even now.
A beautifully crafted work of dark humour and foreboding, Huxley takes us to a future ( we don't know how far ahead as the year is given as AF631.) where humans are factory farmed. Their future caste established from conception, by selective nourishment or poisoning of the foetus throughout its growth (in a bottle).

Family doesn't exist, the very thought is repugnant. Children are conditioned to behave as befits the caste. Alpha pluses run the world with Epsilon semi-morons at the bottom of the ladder. All are kept in line with a dose of "soma" a happy pill that keeps the population under control.

No one really cares for anyone, everyone sleeps with everyone and the world is full of pretty,plastic music and calming aromas.

The question is what would happen if a normal person (a savage) dropped into this perfect world?

bal of balham
5.0 out of 5 stars If you never read another book read this one!
Reviewed in the United Kingdom on 19 August 2017
Verified Purchase
I had never thought to read this book and was actually searching for a film (The Shape of Things to Come) which I thought was from a story by Aldous Huxley. Instead I bought Brave New World and am glad to have do so. Written at a time (1932) when science fiction was very much still in its infancy the predictions of medical and technical advances are remarkable for their accuracy and the changes to social mores coupled with eugenics is frighteningly familiar. This book should be compulsory reading for everyone, in particular those world leaders (both secular and religious), scientists, the armed forces, industrialists and overzealous do-gooders who wish to impose upon in so many ways.
Read more
65 people found this helpful
Report abuse

A. Russell
1.0 out of 5 stars Disappointing drivel, clumsily written and thoroughly unsatisfying to read.
Reviewed in the United Kingdom on 13 February 2020
Verified Purchase
After finishing George Orwell's 1984 and, telling everyone who'd listen, how good it was, I was recommended to read Brave New World.

I accept that the frame of reference from Huxley's era was very different to ours, sadly it doesn't translate very well to this story at all.

The thing about 1984 is the prophetic way in that it describes the 'future', our present day. Orwell's writing style is relaxing to read and allows you to become absorbed in the world that he expertly crafts.

The main characters are not given any flesh, and I was unable to find any common ground with any of them, and found myself unable to understand any of their, apparently, randomly changing motivations.

This text has very strong undertones of religious zealotry and tries to persuade the reader in favour of religion over all. Further, the constant copy-and-paste paragraphs from Shakespeare became tiresome.

Very disappointed in this book, I persevered in the hope of a satisfactory ending but found it to be rushed, confusing and ridiculous.

If you're looking for a classic that provides a 'prophecy of the future', read 1984 instead, don't bother with Brave New World, you'll only leave disappointed.
Read more
18 people found this helpful
Report abuse

JayOTee
5.0 out of 5 stars Should have read this way earlier...
Reviewed in the United Kingdom on 10 January 2016
Verified Purchase
Brave New World depicts a simple, light-hearted and perfectly content society, where, through conditioning from the moment you burst into life in the test tube to your irrelevent death, no-one suffers, no-one complains, and no-one is ever alone. A world where you are constantly stimulated by synthetic machinery, and require nothing but one or two pills to escape a stray emotion here or there, or induce a mental holiday to avoid the possiblity of facing them. No worries.

And also no art, no literature or true creation of any kind. No gods or spirituality, no adventure or surprises or passion of any kind, ever. No parents or families or friends or intimacy. No scientific advancement. No private thoughts. Everyone is for everyone else. Your time must be shared. You can never experience solitude and reflection. You can never have autonomy. Your words are not your own. Your body is not inviolate. If you are not like this you are shipped off to an island with the few other defective members of society who are like you. Whether that is lucky or unlucky is a matter of perspective.

Effing frightening stuff if ever I heard it. I loved this book more after I finished than when I was reading, because the challenge wasn't in accepting the world the characters inhabited, as it was really easy to digest because of its intentional tone (extraordinarily light, as if you're on a drug inducing you to be that way the entire time, hint hint), but accepting the world around me as being frighteningly familiar to it in some unsettling ways. It deosn't wholly reflect the world right now, but when it does it is in big ways. Though short it feeds enough into the psyche about our society as a whole, how we need suffering for heroism, mutual passion for love, pain and rejection for inspiration, and loss to understand the value of life - without these things creativity and progression are impossible. In Brave New World they are unwanted. Even sitting here now I'm remembering things that have so much more meaning after digesting than they did at the time. I suppose that's a good sign, being able to think...

Having been released in the 40s (and so forgiveness must be given for some more outdated things in it), I'm sure it was a frightening vision of the future like its fellow 1984. Nowadays, maybe it doesn't always get the same reception because we're slipping into a distracted world and are conditioned to not see it coming...even like it... There are so any things I could write now the layers are springing up, but I would probably write an essay. Or a book. It'd probably be something very much like this one.

As an added bonus, there was was also that moment I realised the film Demolition Man was clearly inspired by this book. That was a revelation.
Read more
66 people found this helpful
Report abuse
See all reviews
Back to top
Get to Know Us
Make Money with Us
Let Us Help You
And don't forget:
© 1996-2021, Amazon.com, Inc. or its affiliates