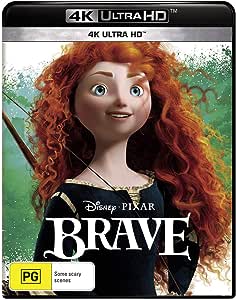 Take a heroic journey with Merida, a skilled archer and headstrong daughter of King Fergus and Queen Elinor. Determined to carve her own path in life, Merida defies an age old custom sacred to the unruly and uproarious lords of the land. When Merida's actions inadvertently unleash chaos in the kingdom, she must harness all of her skills and resources; including her clever and mischievous triplet brothers; to undo a beastly curse before it is too late and discover the meaning of true bravery.

4.8 out of 5 stars
4.8 out of 5
6,076 global ratings
How are ratings calculated?
To calculate the overall star rating and percentage breakdown by star, we don’t use a simple average. Instead, our system considers things like how recent a review is and if the reviewer bought the item on Amazon. It also analyses reviews to verify trustworthiness.

😠
5.0 out of 5 stars Brave is Another Classic Disney Film
Reviewed in the United Kingdom on 2 January 2013
Verified Purchase
Brave is another triumph from Disney/Pixar who seem to rarely put a foot wrong these days. It's possibly the most stunning animation I have ever seen. Pixar really put a lot into capturing the vibrant, magical beauty of Scotland giving the film a jaw-dropping look. The characters are expertly played by some of Scotland finest (Kelly Macdonald, Billy Connelly, Kevin Mckidd, Robbie Coltrane). Funny as it may sound Disney could have opted for American actors but instead made a very wise decision and used Scottish actors. It was also great hearing Young McGuffin (played by McKidd) using the Doric dialect (Aberdeen) as it's so thick its indiscernible what he's saying. In fact I'm very pleased that Disney went for an authentic Scottish script that didn't overemphasise any stereotypes (although they had to have a haggis gag in there).

I thought the story was unique, despite many so-called critics referring to this film as a traditional fairytale. It's not at all, it's a film about a Mother and Daughters relationship which I've certainly never seen done before. It has elements of a more traditional fairy tale but this sits very well with the setting so it's not contrived. Its a really good strong female lead role for once without the need for a bumbling (or otherwise) prince saving the fair maiden etc.

The 3D was stunning, you could watch Merida's hair all day. I really enjoyed the whole package, the songs were fantastic too. Modern Scottish folk songs like Julie Fowlis' Touch The Sky make this film sparkle.

Anyway, please get this film for your kids and for yourself, it's a great story with a stunning look and will be one to watch again and again.

A. Chell
4.0 out of 5 stars Well made but no classic
Reviewed in the United Kingdom on 12 February 2013
Verified Purchase
For a Pixar movie, this isn't one of their best. Fortunately, with a back catalogue that includes the Toy Story trilogy, Up, The Incredibles and A Bug's Life, this isn't as great a criticism as it might be.

When released in the cinema, some parents were concerned about the scarier scenes involving the bears but my younger daughter was more concerned by the mother-daughter arguments.

The 3D conversion works fine, though it does make the film darker and mute the vibrant colours of the computer-generated Scottish countryside, so the 2D Blu-Ray version is the one we prefer.
Read more
Report abuse

Kindler
5.0 out of 5 stars 3D Wow beautifully filmed.
Reviewed in the United Kingdom on 8 December 2012
Verified Purchase
Amazing visuals of the Scotland highlands. Great humor a bit similar to the style of How To Train Your Dragon. The story is a simple one involving a head strong princess who wants to make up her own mind as to who to marry and wants to change her mothers traditional ideas. Without spoiling it too much her mother changes literally into some other animal and it is this that takes up the bulk of the story. Probably the best 3d animated picture the story could have been a bit more involved but fun anyway and really love it in my 3d collection.
Read more
One person found this helpful
Report abuse

Paul Taylor
5.0 out of 5 stars Loved it
Reviewed in the United Kingdom on 11 February 2013
Verified Purchase
We loved it - and that includes my daughter who can be very critical. Liked the characters. Thrilled with the plot. Laughed at the humour. Enjoyed the twists. The 3D made it all the more enjoyable. Have seen some 3D films that was a waste of money, but this one was more than worth it. Looking forward to viewing the many extras on it.
Read more
Report abuse
See all reviews
Get FREE delivery with Amazon Prime
Prime members enjoy FREE Delivery and exclusive access to movies, TV shows, music, Kindle e-books, Twitch Prime, and more.
> Get Started
Back to top
Get to Know Us
Make Money with Us
Let Us Help You
And don't forget:
© 1996-2020, Amazon.com, Inc. or its affiliates