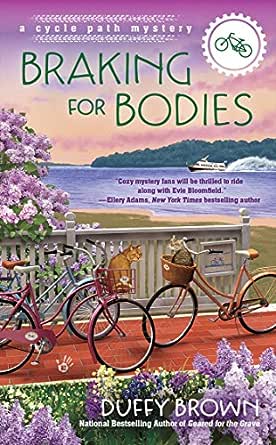 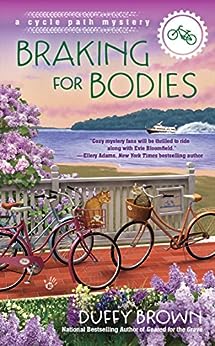 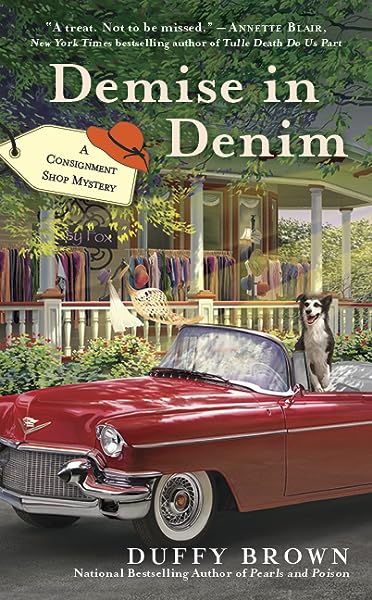 Praise for Geared for the Grave

"Sparkling dialogue, an unforgettable island setting, and all the charm a cozy mystery fan would want."--Ellery Adams, New York Times bestselling author of the Books by the Bay Mysteries

"A charming setting, a determined heroine, and a love interest worthy of hunk status...Geared for the Grave speeds along and never puts on the brakes!"--Kylie Logan, author of League of Literary Ladies Mysteries

"Fast, funny, and full of heart! Geared for the Grave is a rollicking ride. I enjoyed every bump in the road and twist of the plot. I can't wait for the next Cycle Path Mystery!"--Molly MacRae, national bestselling author of the Haunted Yarn Shop Mysteries --This text refers to the mass_market edition.

Evie Bloomfield puts the pedal to the metal in the latest Cycle Path mystery from the national bestselling author of Geared for the Grave. --This text refers to the mass_market edition.

Duffy Brown is the national bestselling author of the Cycle Path Mysteries and the Consignment Shop Mysteries. --This text refers to the mass_market edition.
Read more

4.4 out of 5 stars
4.4 out of 5
61 global ratings
How are ratings calculated?
To calculate the overall star rating and percentage breakdown by star, we don’t use a simple average. Instead, our system considers things like how recent a review is and if the reviewer bought the item on Amazon. It also analyses reviews to verify trustworthiness.

Rosemary
5.0 out of 5 stars Mackinac Island Excitement
Reviewed in the United States on 7 April 2016
Verified Purchase
Evie Bloomfield is ready for Spring. After a wicked winter on Mackinac Island, she's ready to enjoy being outdoors. When she sees her friend, Fiona, at the dock, she's surprised at how furious Fiona is. She's mad that her former boss and his girlfriend are on the Island. Peephole Perry is threatening her. Things get worse when his wife arrived. Now he's dead and Fiona is the main suspect. Evie knows that someone is framing her friend. She won't let sexy Sheriff Nate Sutter put her friend in jail. Evie knows that they can help sort this out. All they need to do is track down the killer and convince the tourists that it's a murder mystery contest. Can they succeed and avoid being the next victims? Duffy Brown had me from the first page. The characters both old and new are amazing. Evie is a feisty heroine who won't be stopped when her friend needs her. I liked her and her kitties. They are the only ones who can keep her in line. She and Fiona make a great team. They're like Lucy and Ethel. The Sheriff has his eyes on Evie. He's attracted to this stubborn woman, but so far he hasn't got the girl. This is a well told mystery that has a great setting, plenty of suspects who wanted the blackmailer dead and a wedding that is self-destructing. The snappy dialogue and wild situations kept me laughing. The ending left me wanting more. I can't want to see what happens next.
Read more
6 people found this helpful
Report abuse

Joanne K
5.0 out of 5 stars Masterful Humorous Cozy
Reviewed in the United States on 9 April 2016
Verified Purchase
Braking for Bodies is the second book in the Cycle Path Mysteries penned by Duffy Brown. Ms. Brown takes us back to visit Mackinac Island where the Lilac Festival is soon to start. It's been almost a year since Evie moved to Mackinac Island and she’s settled in and became permanent resident. She’s longer a "fudgie" as locals call the tourists, she's living alone at Rudy's Rides and has become a partner in the bike rental shop. Rudy has moved in with Irma at her Fudge Shop as they prepare to tie the knot. Evie Bloomfield, together with her friend Fiona have a way of finding trouble. Fiona's old boss, Peephole Perry, comes to Mackinac Island with his mistress. He intends to blackmail her to go back to L.A. to resume working for his paper again. His wife Madonna shows up on the island and Evie stumbles across Peeps dead body with all the clues leading to Fiona. His mistress Zo is fighting with his wife Madonna. All of the guests staying at the Grand Hotel have split into group: The Crusaders, the Body Baggers, and The Murder Marauders thinking this whole murder is just part of the murder weekend, the winning group will get their weekend stay for free. Evie is doing all she can to keep Fiona from being charged with murder while still providing maid of honor duties to Irma.

The character development has grown markedly since the first book. Every character is unique in their own way. Their relationships have grown as well. A feeling of real friendship and support has been established. A superbly written plot, combining humor and cozy mystery that flows smoothly, is pure creative genius. Ms. Brown’s talent shines brightly throughout this book. Braking for Bodies is wonderful addition to the Cycle Path Mystery series, and I can’t wait to read the third! If you are looking for a book with the perfect blend of humor and mystery this is a series that you don’t want to miss. Get your copy today.

Kelli Jo Calvert
5.0 out of 5 stars A Crazy Bike Trip Around Mackinac Island!
Reviewed in the United States on 15 April 2016
Verified Purchase
Get ready for a romp around Mackinac Island! Where there's a Lilac Festival and Evie Bloomfield and her dark cloud, there's bound to be fun...and trouble. While trying to take care of her maid-of-honor duties to a quickly falling apart wedding, Evie must try to find a killer and prove to Chief Sutter that her best friend, Fiona, is innocent. Fiona's old boss from LA has shown up with his secretary, and mistress, Zo, followed closely by his angry wife, Madonna. He's not on the island a full day, when poor Evie finds him dead - with Fiona hovering close by. To keep the tourists from mass-exiting the island, Evie talks Sutter into letting everyone believe that it is a Mystery Game, and everyone involved are actors - not a real murder. The Grand Hotel gets into the fun, offering the winning team who figures out the Mystery, a free weekend at the Grand. Duffy Brown takes you on a fun ride, on a bicycle of course (and sometimes "borrowed" horse) around Mackinac, trying to figure out just who "done it". There are too many possibilities and not enough real clues. Is the wife or the mistress? They have alibis. Is the check-in clerk and hotel manager? They've got something going on. Is it Fiona and her singer friend, Idle Summers? Peep had something on both of them. You're gonna have to read to the very end to find out! And you won't be able to put it down until the end!!
Read more
Report abuse
See all reviews
Back to top
Get to Know Us
Make Money with Us
Let Us Help You
And don't forget:
© 1996-2021, Amazon.com, Inc. or its affiliates