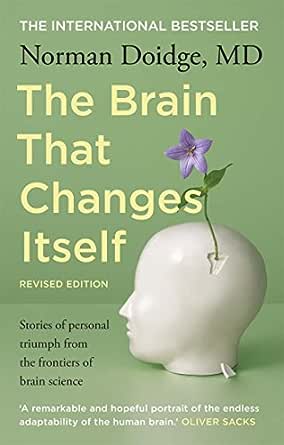 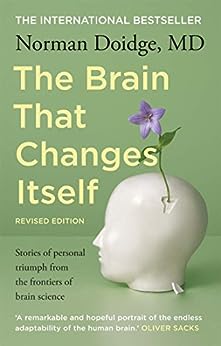 The Brain That Changes Itself: stories of personal triumph from the frontiers of brain science Kindle Edition

An astonishing new scientific discovery called neuroplasticity is overthrowing the centuries-old notion that the adult human brain is fixed and unchanging. It is, instead, able to change its own structure and function, even into old age. --This text refers to an alternate kindle_edition edition.

An utterly wonderful book - without question one of the most important books about the brain you will ever read; yet it is beautifully written, immensely approachable, and full of humanity. Its message is one of hope: it is not just our brains that shape our thinking, but our thinking that, very definitely, shapes our brains.

Doidge has identified a tidal shift in basic science and a potential one in medicine. The implications are monumental (Penny Wark The Times)

A remarkable and hopeful portrait of the endless adaptability of the human brain (Oliver Sacks author of The Man Who Mistook His Wife for a Hat) --This text refers to the paperback edition.

Norman Doidge, M.D., is a psychiatrist, psychoanalyst, and researcher on the faculty at the University of Toronto's Department of Psychiatry and the Columbia University Center for Psychoanalytic Training and Research in New York, as well as an author, essayist, and poet. He is a four-time recipient of Canada's National Magazine Gold Award. He divides his time between Toronto and New York. --This text refers to an out of print or unavailable edition of this title.
Read more

4.7 out of 5 stars
4.7 out of 5
2,452 global ratings
How are ratings calculated?
To calculate the overall star rating and percentage breakdown by star, we don’t use a simple average. Instead, our system considers things like how recent a review is and if the reviewer bought the item on Amazon. It also analyses reviews to verify trustworthiness.

Pamela M.J.
TOP 1000 REVIEWER
5.0 out of 5 stars Worried that your brain is not working so well as it used to? Then read this!
Reviewed in Australia on 19 January 2020
Verified Purchase
This is the book we should all read as we start to age; feel our memory is fading; or we are groping for words and fear Alzheimers. The research described gives encouragement to keep our brains healthy in the same way we look after our bodies - and the only thing we need to forget is the myth that we can't be as as sharp at 70 or 80 as we were at 50..

But there is much more to this book than that. There are stories of the brain repairing itself after stroke and spinal injuries; some pointers through the research provided as to how parents can help to ensure their kids avoid the increasingly common problems of dyslexia and autism, and fascinating (if somewhat confronting) accounts of the early research into mapping the brain.

This is an entertaining and educational read that most people should find helpful either for themselves or to help family members or friends. There are also references to further work and exercises designed by Dr. Michael Merzenich and his associates that you can find on the internet.
Read more
Helpful
Report abuse

Anna
5.0 out of 5 stars Excellent
Reviewed in Australia on 4 April 2015
Verified Purchase
I have zero medical training. I know nothing about psychology. The book was recommended to me by my physiotherapist when talking about my chronic pain, although I don't think she expected me to actually buy and read it. I can hardly put it down. It's very well written, and explained in a way that even I understand. So glad I have this book
Read more
4 people found this helpful
Helpful
Report abuse

Malcolm
4.0 out of 5 stars An amazing journey into a complex world.
Reviewed in Australia on 3 August 2015
Verified Purchase
Doidge paints a highly encouraging picture of the research and discovery related to the function and virtually unknown world of how the brain operates and heals itself. For the unenlightened reader it is a journey into a world of discovery that requires extremely pains taking work by very dedicated scientists and medical researchers. And the book talks about genuine cases, where people have suffered debilitating brain injuries and recovered to lead a normal life again, over time. For a lay person, it is a book that sheds some light on a virtually unknown area of the human anatomy and literally the most important, albeit the most complex part of it. Stroke for one thing in many cases is a highly common, disastrous and debilitating injury to the brain. And though it is essentially life threatening, recovery is possible though it can be painfully slow as well. What Doidge talks about is cutting edge material into a world that is unbelievably complex. One has to applaud the scientists and researchers, involved in this very urgent, yet painstaking work. It is said that the incidence of stroke, is frightfully common. This book by Doidge, is an important, well founded insight into a world, the vast majority of us know so very little about.
Read more
One person found this helpful
Helpful
Report abuse

Ted Bergin
5.0 out of 5 stars New information changes old thinking about our brains
Reviewed in Australia on 25 January 2015
Verified Purchase
For those of you who grew up with classically trained Freud and Jung, this is a breath of fresh air. People can and do change after seven years of age.

For those of you who were shown MRIs and told this part of brain carried out this function, here is new research showing the brain is flexible and can be reprogrammed. The more a function is used, the more space is devoted to a function.

For those taught in school the brain stops growing after puberty, here is evidence the brain grows new cells until the last few weeks of life.
Read more
3 people found this helpful
Helpful
Report abuse

Kindle Customer
5.0 out of 5 stars Fascinating
Reviewed in Australia on 4 August 2020
Verified Purchase
Incredible research and investigations were performed to write this book. Highly engaging and interesting. Would recommend to anyone with an interest in neurology, biological sciences or neuropsychology.
Read more
Helpful
Report abuse

B. Geale
4.0 out of 5 stars Amazing really. How plastic is the brain
Reviewed in Australia on 19 April 2016
Verified Purchase
Amazing really. How plastic is the brain. This is a way to practice your own healing by reconnecting to the brain. I have always experienced that there is more to the brain after my healing form a stroke many years ago before I read this book. Great confirmation about the healing properties of the boy if we spend time listening to it.
Read more
Helpful
Report abuse

Amazon Customer
2.0 out of 5 stars Short bursts
Reviewed in Australia on 14 December 2018
Verified Purchase
The stories I have read have been interesting, but I can only read this in between other books.
Read more
Helpful
Report abuse

Samantha Martin
5.0 out of 5 stars Brilliant and confronting
Reviewed in Australia on 29 August 2015
Verified Purchase
Loved this book, really didn't want it to end. The children's educational needs chapters were a must read for any parent with a special needs child. The parts regarding vivisection were confronting but necessary and handled with care. Especially the parts about testing on primates. An uplifting and informative read.
Read more
Helpful
Report abuse
See all reviews

JessH
5.0 out of 5 stars Vital information about the Brain that should be taught in schools, colleges and Universities, it is too important not to know.
Reviewed in the United Kingdom on 19 November 2015
Verified Purchase
Stunning book. The author is thoughtful and wide ranging in his information. He brings research both old and current into his text, and makes sense of the history of how inadequate earlier ideas about brain capabilities were, and how much the knowledge has now expanded massively. It gives hope to anyone who either has brain damage or knows someone who has. The lesson I took from this, was never give up, it turns out the brain is pretty much like the rest of the body, in that when damaged, it DOES have the power to heal itself and recover. You may be left with a scar, just as on your skin, but a huge amount of function can be restored with the right approach. I graduated with a BSc in Psychology (at an age most people are retiring) last year, and so wish I had read this book early in the 3 year course. In fact I've read it after finishing, and my work would have been much improved had I read this earlier. Very highly recommended.
Read more
57 people found this helpful
Report abuse

Mr. M. A. Charlaw
5.0 out of 5 stars The more is realised at how little we know the brain, this is an interesting journey about its capabilities
Reviewed in the United Kingdom on 12 June 2018
Verified Purchase
Am only part way through the book, but, what I have read so far is amazing. Recommended reading for those who may feel they cannot do anything else with their thinking and even movement. The brain certainly can be changed, creating new ways of communicating.

Dogged determination can be a real asset. Read it and find out.
Read more
10 people found this helpful
Report abuse

Totinen Torvensoittaja
5.0 out of 5 stars The brain is Your best friend. Just rely on it.
Reviewed in the United Kingdom on 20 October 2018
Verified Purchase
This book really gives optimistic feeling; the brain really do not only degrade slowly after Your twenties... You really can stay sharp up to Your old ages :-) Just believe that the brain is a plastic system and always keep something new work for it! I’ve just learned - at the age of 61 - learned how to weld, and my stilll living dad - at the age of 85 - just got a driving licence for the truck :-) (he actually bought accidentally too heavy recreational vehicle)
Read more
10 people found this helpful
Report abuse

eden
3.0 out of 5 stars Not for me.
Reviewed in the United Kingdom on 8 October 2020
Verified Purchase
Brains are amazing and I was really looking forward to this read but gave up due to vast amount of animal testing described which I can't stand reading or hearing about, made me feel sick.
Read more
5 people found this helpful
Report abuse
See all reviews
Back to top
Get to Know Us
Make Money with Us
Let Us Help You
And don't forget:
© 1996-2021, Amazon.com, Inc. or its affiliates