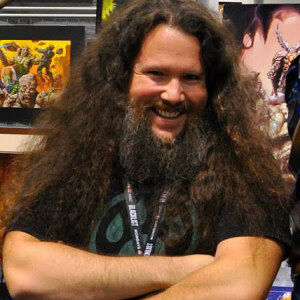 by Samwise Didier (Author)
4.8 out of 5 stars 39 ratings
See all formats and editions
Sorry, there was a problem loading this page. Try again.

Samwise, a.k.a. Sam Didier, is senior art director at Blizzard Entertainment. Samwise's previous books include Grimbeard: Tales of the Last Dwarf and The Last Winter.
Start reading Brutal: The Art of Samwise on your Kindle in under a minute.

5.0 out of 5 stars Brutal - Brilliant book
Reviewed in the United Kingdom on 27 October 2020
Incredibly good art book highly recommend!
Images in this review

Maddie
5.0 out of 5 stars A huge art book from Blizzards one and only Samwise
Reviewed in the United States on 1 February 2021
Verified Purchase
Wow. This book is epic, and I LOVE it! I had no idea Samwise was releasing a personal art book, it showed up on my Amazon recommended list and I purchased immediately. It is everything I could have ever wished for in a Samwise book.

It is an absolute tome, clocking in at just over 300 pages. The book itself is perfectly produced - its a good size, the binding is nice and tight, and the pages are thick and vibrant, love it. The artwork inside covers a variety of subjects. Personal productions and paintings, a section covering ‘Metal’ which is mostly album cover art for a handful of metal bands, Brutal Doodles - which are toned sketches, and of course Blizzard artwork.
The artwork is amazing, but if you are buying this book you should already know that! His personal artwork is mostly fantasy oriented, a lot of it feels just like some random moments in the Blizzard universe but without featuring any of the big name heroes we all know today. There is also artwork from some of his illustrated novels. I was unaware of some of his other work, mostly the album cover artwork for bands like Hammerfall and Amon Amarth - which is truly awesome. There is also a brief step by step tutorial on the book cover art, which was a pleasant surprise at the end of the book. Overall, 300 pages of glorious Samwise artwork! Highly recommend! The Blizzard section is my favorite, which is probably no surprise, but the true treat was the amount of artwork I have never seen previously. I own any and all ‘art of Blizzard’ books that have been published, Ive scoured through them thousands of times, and yet there are still some amazing pieces in here that Ive never seen published. Im talking some oldschool sketches from the 90s for Starcraft and Diablo, theres a bunch of hearthstone art that I dont believe made it to the game, and even some concept work for Heroes of the Storm. Looking through these just reminds me of how much I love the Blizzard universe, and how greatly Sams vision has shaped the look and feel of these games. Theres a quote from Metzen at the beginning that describes how he and Sam would pour through old art books and geek out over the old fantasy art masters, and Metzen later describes how Samwise fits so perfectly in that list of fantasy art masters. I whole heartedly agree and would absolutely include him (and Metzen as well), to a list of the great fantasy artists I grew up admiring.

On a more personal note, I grew up playing Warcraft/Starcraft. Warcraft 3 came out when I was in highschool and when I bought it from the game store, they happened to be selling stand alone copies of ‘The Art of Warcraft’. It was probably the first or second ‘Art of’ books I ever bought, but I was completely obsessed with it. I scoured over the pages endlessly, and between that book and the WC3 instruction manual, I had plenty of drawing inspiration. I knew the name Samwise from previous WC and SC manuals, but there was so much more in these two book. I loved Sams art style, it was colorful and exaggerated. Ive always loved fantasy art and his style so perfectly captured the classic fantasy character tropes, but gave them this exaggerated and aggressive, yet lighthearted feel. Its a tricky thing to describe, and it feels like such a delicate balance to recreate, but Samwise flawlessly executes - and I think its what draws me the most to his work. You can always tell hes having so much fun illustrating the image. I will truly treasure this book, as it feels like a gift we didnt deserve. Its a wonderful insight into a great artists collection of work. On a final note, theres a few times through the book where Sam mentions creativity and describes it as “something that wasnt here an hour before, and now youve brought something into this world...youve just left a piece of yourself to the world”. I really like that, and Samwise if you ever read this, thank you for bringing so much of yourself into this world, its truly a more adventurous and brutal world for it.

Jeremy
5.0 out of 5 stars FOR THE HORDE!
Reviewed in the United States on 28 April 2021
Verified Purchase
Samwise has to be one of my favorite artists of all time, and this book is a dream come true. I get to view a master at work. As an artist this book is an inspiration. I absolutely love this book and for the price sheesh this is a steal, this book is a gold mine for artists and blizzard fans at a low price. 5 stars! Buy it,you won't be disappointed!
Read more
Report abuse

Amazon Customer
5.0 out of 5 stars Keep ABC, love this book
Reviewed in the United States on 8 July 2021
Verified Purchase
Great book, it's a must buy if u like art from blizzard artist... Went in perfect shape at home, great service.
Read more

5.0 out of 5 stars Keep ABC, love this book
Reviewed in the United States on 8 July 2021
Great book, it's a must buy if u like art from blizzard artist... Went in perfect shape at home, great service.
Images in this review

BRIAN
5.0 out of 5 stars fantastic
Reviewed in the United States on 10 June 2021
Verified Purchase
fantastic book, I can feel that there is origin of Blizzard Art
Read more
Report abuse
See all reviews
Back to top
Get to Know Us
Make Money with Us
Let Us Help You
And don't forget:
© 1996-2021, Amazon.com, Inc. or its affiliates