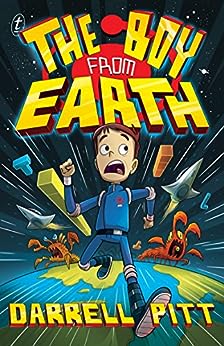 The Boy from Earth Kindle Edition

A new laugh-out-loud space adventure for middle-grade readers from the author of A Toaster on Mars and the Jack Mason Adventure series. --This text refers to the paperback edition.

Darrell Pitt is the author of A Toaster on Mars, shortlisted for the Russell Prize for Humour Writing, and the Jack Mason Adventures, a series of five novels including The Firebird Mystery, a CBCA Notable Book. He lives in Melbourne. --This text refers to the paperback edition.

rob
5.0 out of 5 stars great
Reviewed in Australia on 11 March 2019
Verified Purchase
great product
Read more
Helpful
Report abuse
See all reviews
Back to top
Get to Know Us
Make Money with Us
Let Us Help You
And don't forget:
© 1996-2021, Amazon.com, Inc. or its affiliates