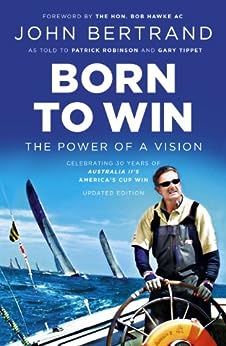 Born To Win: The Power Of A Vision Kindle Edition

Greg Greer
5.0 out of 5 stars Born to Win - An exciting, thrilling and well paced book on the 1983 America's Cup Challenge
Reviewed in Australia on 5 October 2014
Verified Purchase
Born to Win: The Power of a Vision is one of the most thrilling books I have read and I reread it often. It is set against a backdrop of frustrated attempts to wrest the America's Cup from the New York Yacht Club, the journey to build a team of professional sailors, the personal story of the skipper of the 1983 challenge and the roller coaster ride through the 1983 seven race series. This is a book that profiles the struggle for excellence and illustrates the power of team work and courage that can transcend the institutional, technical and financial power of an opponent. The psychology of winning is a key element in this book that not only shows how to prepare for the campaign, but what it takes to unsettle your opponent by observing and digging out their weaknesses, then developing a game plan around how to exploit them. The myth of the winged keel and how it undermined their opponent's confidence, the imagery of the famous boxing kangaroo, the battle hymn by Men at Work music icon, "We come from a land down under", all combined to build a narrative that entranced the world . This book appeals on many levels. There is a personal story to achieve excellence, a potted history of the Australian challenges for the America's Cup, the tenacious character of Alan Bond, the financial backer for the 1983 challenge, the innovative way that the team was developed to meet the trials of the campaign using sports psychology, the story of a small Australian nation swept away by the courage, audacity and the ultimate success of their team, and the international aspect of the David & Goliath struggle by a tiny country punching away to win against a mightier opponent. As an Australian, I too was swept away by the romance of this story and the immense national pride it engendered. If you were alive to witness this challenge you will remember the time and place and what you were doing when Australia won the America's Cup in 1983. But this story transcends the nation state interest and is a book that will resonate with anyone who seeks to understand the tenacity of the human spirit and how it can achieve what it strives for. I would recommend this book to anyone seeking to learn, explore and be entertained about the 1983 America's Cup challenge.
Read more
Helpful
Report abuse
See all reviews

EMASHMEAD
5.0 out of 5 stars Just the best
Reviewed in the United Kingdom on 10 September 2021
Verified Purchase
The best book : so inspirational. I must have read it 5 times now. It makes me cry every time and so many life lessons.
Read more
Report abuse

Kimberly Tate
5.0 out of 5 stars Extraordinary Reading
Reviewed in the United States on 1 June 2014
Verified Purchase
I have owned 2 copies of the original book and that I have lent out and lost. I am very excited that this is now available on kindle as this is one of my favorite leadership books. I have recommended this book numerous times as it is not just a story of a boat race, it is the true definition of team work. Digging in when there is nothing left. Can't wait to start reading the updated version!
Read more
Report abuse

Matilda
5.0 out of 5 stars Bloody great boolk
Reviewed in the United States on 4 November 2016
Verified Purchase
I read this book because I live in Newport and occasionally sail on the 12s around here. Very well written. Great to getting a feeling for what the cup was like before these billionaires ruined it.
Read more
Report abuse
See all reviews
Back to top
Get to Know Us
Make Money with Us
Let Us Help You
And don't forget:
© 1996-2021, Amazon.com, Inc. or its affiliates