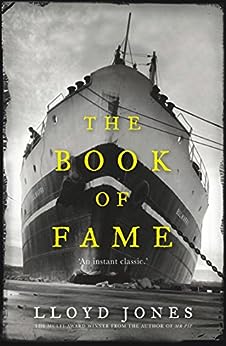 by Lloyd Jones (Author) Format: Kindle Edition
See all formats and editions
Sorry, there was a problem loading this page. Try again.

Winner of the Tasmania Prize and the Deutz Medal for fiction this is a singular melding of history and imagination.

In August 1905 a party of young men boarded a ship for England. Among them were four farmers, two bootmakers and a boatbuilder. They set out from Auckland, never dreaming they would conquer the world. By December they were the 'wonderful All Blacks' who had beaten Yorkshire, England and Ireland.

They were a tribe far from home, weary, bedazzled, a little lost-but the world showed them wonders: the Eiffel Tower, snow on Tierra del Fuego, English lords, Consomme Sarah Bernhardt. America! But years later, it was something else that remained indelible. A feeling shared, grave and simple, that survived all the acclaim.

'It's a book about blokes, bluff outside, but discerning inside, blokes who speak poetry, the way we all would speak if we could put our finest feelings into words…It's a beautiful book: complete, strong and poetic.' Bulletin

Lloyd Jones was born in 1955 in Lower Hutt in New Zealand and graduated from Victoria University. He has worked as a journalist and covered Papua New Guinea's blockade of Bougainville during the 1990s, which formed the setting for his bestselling Mister Pip. Jones has received awards including the Katherine Mansfield Memorial fellowship (1988), the Deutz Medal for Fiction, the Tasmania Pacific Fiction Prize (2003) and the Montana New Zealand Book Award (2001). In 2007, Jones won the Commonwealth Writers Prize for Mister Pip, which was also shortlisted for the Man Booker Prize, and in 2008 he received the New Zealand Prime Minister's Award for Literary Achievement. His latest book is Hand Me Down World.

This starkly beautiful book . . . tackles the origin of myth, the creation and nature of man-made beauty, and the sense of self New Zealanders have both as individuals and as a nation (The Age)

Being a truthful writer, Jones sees nothing; neither his heroes nor his villains in black and white. His is a bold inquiry into the way that we construct and repair our communities, and ourselves, with stories old and new (The Times)

Lloyd Jones gives the tired post-colonial themes of self-reinvention ... a fresh, ingenious twist but his real achievement is bringing life and depth to his characters (Sunday Telegraph)

Lloyd Jones is one of New Zealand's best known contemporary writers. He has published essays and children's books but his best known works include the novels The Book of Fame, winner of numerous literary awards, Biografi, a New York Times Notable Book, Choo Woo, Here at the End of the World We Learn to Dance, Paint Your Wife, Hand Me Down World and the phenomenally successful Mister Pip, winner of the 2007 Commonwealth Writers' Prize, the Montana Medal for Fiction and the Kiriyama Writers' Prize. Mister Pip was also shortlisted for the Man Booker Prize in 2007. He lives in the Wairarapa.

Lloyd Jones is the author of several novels and short story collections which include Mister Pip, winner of the Commonwealth Writers' Prize best book award and shortlisted for the Man Booker Prize in 2007, The Book of Fame and Hand Me Down World, which was shortlisted for the Berlin International Prize. He has also published a memoir, A History of Silence. He lives in New Zealand.

Fernando Monge
5.0 out of 5 stars Life and Rugby at his best
Reviewed in Spain on 12 December 2014
Verified Purchase
An amazing and delightful book. It his an epic and poetic narration of men of humble origins making history in the rugby field. But the book is mucho more than that, it is poetry and a historical rendering of a group of men and a historical time.
Read more
Report abuse

Maire Leadbeater
5.0 out of 5 stars Great book
Reviewed in the United States on 22 June 2019
Verified Purchase
Lloyd Jones is a wonderful writer and this book is an insight into a little known pre-World War 1 chapter in our NZ history
Read more
Report abuse

David Hart
4.0 out of 5 stars Loved it. Where's the TV series?
Reviewed in the United States on 12 July 2017
Verified Purchase
Of course you grow up on the legends of the All Blacks, if you grow up in a rugby-playing nation, but this book both humanises and celebrates them in so much detail.

They were superheroes and they were regular blokes out of their element. Reading about their humanness adds to their heroism by contrast. They changed rugby, and their home nation's level of self-expectation... then they went home again.

Thoroughly recommend this to anyone with even only a mere passing interest in the foundations of the All Blacks' legend.
Read more
Report abuse

Annabel Norman
4.0 out of 5 stars A good read and reflection on fame - then and now.
Reviewed in the United States on 6 April 2013
Verified Purchase
The Book of Fame grows on you once you get used to the writing style- being more like poetry. It is a wonderful reflection of the time (1905) and these working class New Zealand men going back to what was still considered "the Mother Country" to pit themselves against the English (mostly public school boys) and find they have a game far ahead of what is happening in the rest of the world. It is more about fame than rugby (which i'm not a great fan of) and how these working class tough men cope with it.

It is not a book just for people who like sport but will interest anyone who is interested in the idea of fame and how (in our times now) so many people are looking for it while these men in 1905 had no expectations of such a thing and how they manage it when it comes there way.
Read more
Report abuse

Victoria Matthews
5.0 out of 5 stars Very different and very awesome!
Reviewed in the United States on 10 April 2014
Verified Purchase
A very different approach to writing, mixing fact and fiction, every sports fan should read it! An awesome read from a talented author
Read more
Report abuse
See all reviews
Back to top
Get to Know Us
Make Money with Us
Let Us Help You
And don't forget:
© 1996-2021, Amazon.com, Inc. or its affiliates