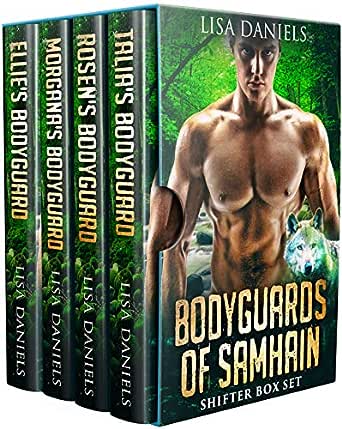 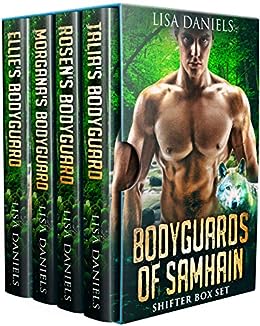 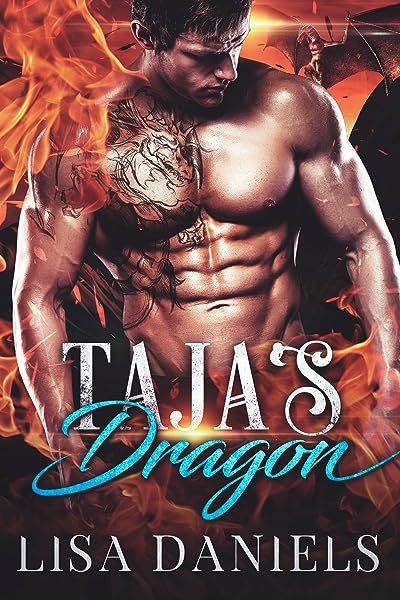 Michele Matheson
TOP 1000 REVIEWER
5.0 out of 5 stars Bodyguards of Samhain shifter box set
Reviewed in Australia on 24 November 2019
Verified Purchase
Thoroughly enjoyed all the stories in this box set great storylines and the continuation of the story throughout the set recommend to all
Read more
Helpful
Comment Report abuse

fiona
5.0 out of 5 stars Necromancer Lovers
Reviewed in Australia on 10 April 2020
Verified Purchase
Loved the characters and how they were woven into each new story. Lisa Daniels will be added to my favorite authors list.
Read more
Helpful
Comment Report abuse

Anne Dwyer
TOP 500 REVIEWER
5.0 out of 5 stars An awesome series!
Reviewed in Australia on 8 November 2019
Talia's Bodyguard
Talia and her family are all necromancers - and certainly not popular. Her father is about to become a councilor, which will mean that what she is will become public knowledge, and her father decides she needs protection. He hires Janos, a bipedal were wolf to guard her. Janos hates necromancers, but will he be able to resist the beautiful girl who has been placed in his care? And although Talia definitely doesnt want a body guard, will she be able to fight the attraction? What will happen when her family is attacked, and she finds she has been betrayed by one of the few people she trusts? Loved it, and cant wait to read more about his family.
Rosen's Bodyguard
Rosen's family have all been targeted by assassins - her sister Talia was attacked at her University by a friend, Rosen and her father had been targeted in a car crash, and Rosen had been badly hurt. So the Police Dpt that employed her has decided that she needs a body guard. Albert is assigned to her - and he is a real hottie! But Rosen is already in a relationship with James.
When she is given an assignment that turns out to be extremely dangerous, will Albert be able to save her? What will happen the the feelings floating between them?
Morgana's Bodyguard
Morgana has been offered a job by her sister, which is going to be dangerous - but the pay would make it worthwhile. She will be working with Rosen and the Police Department.
Theon is assigned to her as a body guard - and is not happy when she looks so much like young client that he failed to protect years ago. However, he too needs the money to support his mother and siblings. Will they be able to find the old bones that have been stolen? And will they be able to stop the dead fights where spirits are forced to fight each other - being a necromancer is bad enough, with public opinion against them, without people defiling the spirits in this way.
What will happen between Morgana and Theon? Will they give in to the feeling building between them?
Ellie's Bodyguardo
Mason has been Ellie's body guard since she was 9 years old. Her father has taught her t fight in the Dead Rings, using old spirits to battle each other. When Morgana and the police work a sting against them, and the ring is closed down, Ellie decides that she truly oes want to escape - and runs to her friend Talia for help. She decides to turn informant, and tells Rosen all that she knows of the inner workings of the circles. Mason follws her, and is again employed as her body guard - but will her father let her go? Or will he try to kill them both? Will the police department be able to keep her safe? Mason i her best friend, and Ellie doesnt want him hurt.

I loved that each story in this series could be read as a stand alone, but the threads carry them through to each other - loved it!

Caroline Doig
TOP 50 REVIEWER
5.0 out of 5 stars Fantastic Boxset.
Reviewed in Australia on 10 November 2019
4 fantastic stories about Necromancer’s and the shifters who are assigned to be their bodyguards.
Book 1 Talia’s Bodyguard: Janos’s and Talia’s story.
Book 2 Rosen’s Bodyguard: Albert’s and Rosen’s story.
Book 3 Morgana’s Bodyguard: Theon’s and Morgana’s story.
Book 4 Ellie’s Bodyguard: Mason’s and Ellie’s story.
This is an interesting set of stories so totally different than what Lisa Daniels usually writes but I enjoyed then all nonetheless, full of action, adventure, suspense, danger, passion and so much more to keep you entertained and turning the pages. This is a fantastic boxset and I highly recommend this book it’s well worth the read.
Read more
Helpful
Comment Report abuse

Tania
TOP 500 REVIEWER
5.0 out of 5 stars Wow so worth reading.
Reviewed in Australia on 20 November 2019
Loved the books they were great, the stories were written well and the characters are interesting. Each of the books were unique on their own. You read one book and before you know it, it was finished. You had all different emotions with each book.
Thank you for allowing me to review your book.

I received a free copy of this book via Booksprout and am voluntarily leaving a review.
Read more
Helpful
Comment Report abuse
See all reviews from Australia

carol
1.0 out of 5 stars Possible YA target audience DNF
Reviewed in the United Kingdom on 9 March 2020
Verified Purchase
It was very slow going, in fact it was fractured and irritating.
The character building was non existent, the dialogue childlike and the character interaction slightly ridiculous.
Almost two hours in and the book was no further along than it was at the half hour point except there was a dark entity released that her family couldn't sense and her Father and sister were hospitalised.
All told in a monotonous dialogue that almost sent me to sleep.
I was not about to give up anymore of my life to a book they could have been so much better.
Read more
Helpful
Sending feedback...
Thank you for your feedback.
Sorry, we failed to record your vote. Please try again
Report abuse

MRS AC BASSETT
5.0 out of 5 stars Yet another stunning series by Lisa Daniels
Reviewed in the United Kingdom on 22 November 2019
Verified Purchase
Yet another stunning series by Lisa Daniels. A great story running through all 4 books, strong independent women and four hot as hell shifters.
Sad it came to an end but I would highly recommend this box set.
Read more
Helpful
Sending feedback...
Thank you for your feedback.
Sorry, we failed to record your vote. Please try again
Report abuse

Shirley Anne benjafield
5.0 out of 5 stars Gooood
Reviewed in the United Kingdom on 30 March 2020
Verified Purchase
This is the first book I have read about necromancy, and I thoroughly enjoyed it. Different is not the word for it. It was a well written book. Hope you write more.
Read more
Helpful
Sending feedback...
Thank you for your feedback.
Sorry, we failed to record your vote. Please try again
Report abuse

Emily Pennington
5.0 out of 5 stars Great Shifter Box Set !!!
Reviewed in the United States on 8 November 2019
Verified Purchase
This Box Set of 4 shifter books includes: Talia's Bodyguard, Rosen's Bodyguard, Morgana's Bodyguard, and Ellie's Bodyguard. Below is a review of one of them to give you an idea of what to expect in this set. Enjoy!

*** Reviewing “TALIA'S BODYGUARD - BOOK 1” ***
Talia is a member of the Grieve family who are all necromancers, feared and not trusted in the public eye. With Talia’s father becoming more prominent and powerful by his promotion, he feels he needs to provide protection for his daughter. Unfortunately, the powerful werewolf bodyguard he hires, Janos, has a history that makes him despise necromancers, so he is not happy about his assignment.

Janos wanted out of the assignment before he even met Talia based on his pre-conceived notions and experience. Talia easily identified his hostility and knew she could not trust him not to harm her or let something happen to her. Where do they go from here? Will daily exposure to each other be enough to show them that people deserve a chance to prove themselves and not be stereotyped “sight unseen”?

This was a well-written story with strong characters and an interesting story line to keep the reader’s attention. Can the two of them build up trust with each other, or are their own experiences too strong to overcome and work together? With the entire box set here, you will have plenty of excellent books for your reading enjoyment!
Read more
3 people found this helpful
Helpful
Sending feedback...
Thank you for your feedback.
Sorry, we failed to record your vote. Please try again
Report abuse

Faye
4.0 out of 5 stars Loved this Boxed Set
Reviewed in the United States on 24 November 2019
Verified Purchase
Each story was unique from one another and takes us deeper into the world the series takes place in. The books have rotating main character, but it is always a necromancer and a shifter bodyguard . Loved how their relationships unfolded so we could see these amazing characters grow in ways you never expected. Each story focus on how supernaturals came out to the world and how they deal with discrimination/hatred that has been building towards them in society.. Loved each story

I received a free copy of this book via Booksprout and am voluntarily leaving a review.
Read more
One person found this helpful
Helpful
Sending feedback...
Thank you for your feedback.
Sorry, we failed to record your vote. Please try again
Report abuse
Load more international reviews

Becky M
5.0 out of 5 stars A blessing in disguise
Reviewed in the United States on 1 December 2019
Verified Purchase
This was one of the most interesting boxsets. I wasn't so sure where I stood on the necromancers until all these stories unfold and entwined. And the bodyguards...oh my!
Read more
2 people found this helpful
Helpful
Sending feedback...
Thank you for your feedback.
Sorry, we failed to record your vote. Please try again
Report abuse

Rosebud
5.0 out of 5 stars Good
Reviewed in the United States on 20 December 2019
Verified Purchase
I gave this 5 stars for the storyline in each of the stories. I couldn't put this down. Having said that it does need an editor's touch which is maddening at times.
Read more
One person found this helpful
Helpful
Sending feedback...
Thank you for your feedback.
Sorry, we failed to record your vote. Please try again
Report abuse