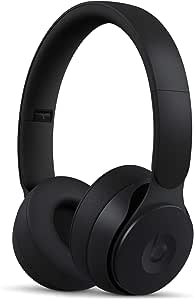 by beats
4.6 out of 5 stars 386 ratings
Available from these sellers.
Show More

Get inspired with Solo Pro noise cancelling wireless headphones. To deliver sound how you want it, Solo Pro features two listening modes: Active Noise Cancelling (ANC) and Transparency. Beats' Pure ANC gives you the space to create with fully immersive sound, while Transparency helps you stay aware of your surroundings. Every detail of Solo Pro has been carefully considered, right down to the intuitive way the headphones turn on and off via folding. The ergonomic design delivers exceptional comfort for extended wear and sleek style. And with up to 22 hours of battery life, you can keep the music going no matter where your day takes you. Solo Pro offers Class 1 Bluetooth for extended range and fewer dropouts.

Transparency helps you stay aware of your surroundings while listening

Auto on/off when you unfold and fold your headphones

Tiara
4.0 out of 5 stars Hurts my ears but good noise cancellation
Reviewed in Australia on 13 July 2020
Colour: IvoryVerified Purchase
I like the noise cancellation, but my ears hurt soo much after wearing these for half an hour, so it kind of defeats the purpose. I still like them though!
Read more
Helpful
Comment Report abuse
See all reviews from Australia

Fal
5.0 out of 5 stars Still Testing it
Reviewed in Canada on 19 January 2020
Colour: GrayVerified Purchase
The headphones 🎧 are great the noise cancellation is terrific but the box was probably squished and the headphones shape🎧 are a bit weird.( Check pictures) I hope it’s gonna go back to regular round shape otherwise am gonna return it
Read more

J. Mulligan
1.0 out of 5 stars Skip this headphone!
Reviewed in Canada on 17 May 2020
Colour: Light BlueVerified Purchase
Not recommended due to clamping force & comfort issues from extended use; there's no power button so they're easily the worst designed device I own. Volume "button" doesn't always register even though there's tactile feedback. Considering the price, these should be avoided.
Read more
Helpful
Sending feedback...
Thank you for your feedback.
Sorry, we failed to record your vote. Please try again
Report abuse

Hanieh
5.0 out of 5 stars Amazing headphone
Reviewed in Canada on 25 January 2020
Colour: GrayVerified Purchase
They are beyond my expectations! Although I cannot wear them for more than 3 hours as there is a small pressure on the ears.
Read more
One person found this helpful
Helpful
Sending feedback...
Thank you for your feedback.
Sorry, we failed to record your vote. Please try again
Report abuse

Gregg Re
5.0 out of 5 stars Good looking and sturdy -- a touch too tight on the head, more muted bass than before
Reviewed in the United States on 2 November 2019
Colour: GrayVerified Purchase
Overall, really love these -- a solid upgrade to the solo 3's, and songs sound noticeably fuller on the pro's. They compare favorably to the Sony XM3's but each has specific advantages over the other. The Sony XM3's sound a bit better overall for classical/jazz music and are more comfortable, but are less ideal for exercise (as solo's have punchier bass for rap/pop/hip hop,+, water resistance, pair more easily w/ multiple devices.)

IMPORTANT NOTE!!
Concerning the fit ... these are surprisingly much tighter on my head than the Solo 3's, and I could see this being a total dealbreaker for some people. It took me a couple days to get used to it, and now I don't mind as much as I initially did. I'm not sure if it loosened up, but I don't think so -- I just think I adjusted. But, there is no question that for comfort, I would rather listen to my sony 1000XM3's for a very long period (1 hr+). For shorter listening, I really like these. The clamping force helps with the noise-cancelling, but it's also very very noticeable, even when I extend these out to their max-level of extension. Note that I have a larger size head, and wear glasses.

Perhaps my favorite little feature: Because these automatically power on when opened, and power off when closed, you never have to fuss with a power button like you do on other headphones. When I go for runs, I just grab these, put them on my head, and start up music on my Apple Watch, and it quickly connects automatically and starts playing. It will quickly join any other Apple device you want, as long as it's on the same account -- just select it from your device menu, with no need to go through a pairing process. When I'm done, I fold them and put them down. This is more convenient than my XM3's, which only remember one device for Bluetooth.

Some nice Apple-specific benefits: When these are on, the headphones will automatically read out any texts ou get, allowing you to reply by voice without having to take out your phone. And, you can ask Siri to turn on or off noise canceling and transparency mode by voice, without messing with setttings.

The sound quality is similar to the Solo 3's, but the bass, for lack of a better word, feels 'tighter.' It's still punchier than the bass in my Sony 1000xm3's, but it feels less like the low rumble of the Solo 3's. Instead, the bass in the Solo pros feels more like one component of the song. For shorter listening periods, I prefer the Solo Pros to both the Solo3's and my Sony 1000xm3's.

The Solo pro's can get very, very loud without distorting the low end at all. The Solo 3's are not terrible by comparison, especially for workouts, but the bass feels less precise and the soundstage more limited. Given a choice between the Solo 3's and the Pros, I would pick the Pros every time -- BUT, when I use the Solo 3's, I still think they sound pretty good.

One huge plus: The Solo pro's have sweat resistance -- woohoo! I can take these running. For many reasons, I would not take the XM3's running.

These look incredible and have a far better, sturdier feel than the Solo 3's. As mentioned, a major advantage of these headphones for Apple users is that, like the Solo 3's, Airpods, Powerbeats, etc, these will pair with your apple account and are instantly accessible from any apple device tied to that account.

I do love the passthrough mode, which uses the microphones to pipe sound into your headphones for when you need to hear ambient sounds. It's surprisingly significantly better than the one on the Sony 1000mx3's I have, and I think the noise cancelling is roughly similar. Really, the passthrough mode here (which you activate with a single press on the underside button) is almost crazy good -- doesn't feel like you're listening to microphones at all.

The noise cancellation, with or without music playing, is also solid. With sound playing, like the XM3's, you won't hear much. It seems not quite on par with my Sony's XM3, but it's just very hard to be more specific than that. Jims' Review Room and Sound guys have a more comprehensive analysis that comes to a similar conclusion, but they do great, especially for canceling the low end.

A double press on the solo pro's underside button will disable both passthrough mode and noise cancelling, doubling battery life to 40 hours. In this mode, outside sounds are partially muffled by the headphones' seal on your ears.

The new iOS update also allows you to control these settings in the menu.

I appreciate that music controls -- pause, play, Siri, next song etc -- are done using clicky and responsive physical buttons on the earcup. The Sony's touch interface has a big problem in winter and wet environments, due to condensation, and I had a lot of mis-presses with those.

Love the way they auto-power off when folded. I don't mind the lack of a headphone jack.

I prefer these to the Powerbeats pro, because those got earwax in them and always seemed to pop out, no matter which of the ear caps I used. The sound quality is a bit better as well. For weightlifers, you might want to check out the power beats pro, as they get in the way a bit less than on-ear headphones like this.

Lastly, the carrying case is super cheap and not at all sturdy, which is disappointing.
Read more

Mike Thompson
5.0 out of 5 stars Nice headphones
Reviewed in the United States on 1 November 2019
Colour: Light BlueVerified Purchase
Earpads very soft. Band is not as tight as I expected - I consider my head shape and size to be very average (for a male) - mostly square, not wide. I think I could easily wear these for a long time.

ANC is on par with Bose QC35ii. Not as good as Sony XM3, but that’s not really why you buy these headphones. These are out and about headphones — not lounging around headphones. ANC should be more than enough to drown out the gym noises.

Sound quality is on par with any other headphone in this price range. Very good, well balanced.
Read more
48 people found this helpful
Helpful
Sending feedback...
Thank you for your feedback.
Sorry, we failed to record your vote. Please try again
Report abuse

Nero
1.0 out of 5 stars Keep these flop headphones.
Reviewed in the United States on 3 November 2019
Colour: Dark BlueVerified Purchase
They don’t even sound as good as the solo 3s do. I dunno what Apple was thinking but if they think that I’m gonna spend an extra 50 bucks for an audio cable for a pair of on ear headphones that doesn’t even have decent sound they have another thing coming. Not only that the anc that they’re going for isn’t even as good as the anc on the beats studio 3s! And you’d think for the money you’re spending they would give you a hard shell carrying case for these! You can keep these flop cans. Imma stick with the beats studio 3s until you guys rectify the mistake.
Read more
41 people found this helpful
Helpful
Sending feedback...
Thank you for your feedback.
Sorry, we failed to record your vote. Please try again
Report abuse