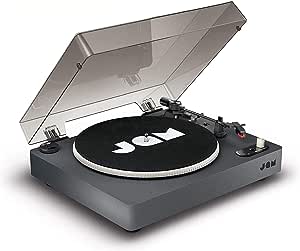 Brand: JAM
4.1 out of 5 stars 309 ratings
Secure transaction
Returns Policy
Your transaction is secure
We work hard to protect your security and privacy. Our payment security system encrypts your information during transmission. We don’t share your credit card details with third-party sellers, and we don’t sell your information to others. Learn more

The convenience of Bluetooth wireless connectivity, the Jam Spun Out turntable gives you all the features you need to rediscover your classic records. Affordable, and belt-driven, it connects wireless to Bluetooth-equipped audio devices or to wired audio systems.

4.1 out of 5 stars
4.1 out of 5
309 global ratings
How are ratings calculated?
To calculate the overall star rating and percentage breakdown by star, we don’t use a simple average. Instead, our system considers things like how recent a review is and if the reviewer bought the item on Amazon. It also analyses reviews to verify trustworthiness.

Mart
2.0 out of 5 stars Stylish looks with uninspiring performance
Reviewed in the United Kingdom on 11 October 2019
Colour: BluetoothVine Customer Review of Free Product( What's this? )
The vinyl revival, steadily growing year on year since around 2007, has generated a corresponding increase in record players and turntables available on the market. The best choice for the individual can be difficult but in general terms there are three types of player on which to spin your vinyl:

This Jam spun out belt driven bluetooth turntable sits comfortably in the budget category, and on first inspection looks to be a reasonable choice for playing all types of vinyl at 33 1/3, 45 and 78 speeds.

The bluetooth feature is good for streaming direct to speakers, and there is an output to connect to a PC for digital transfer. Phono outputs enable connection to an external amplifier or powered speakers, and there is a volume control and headphone input at the front of the player. The case is wood with an attractive matt finish and the hinged lid is smoked black plastic. Size is 38x30x12cm (WxDxH). That’s where the good points end.

A closer inspection reveals some slightly disappointing cost-cutting features. The turntable platter that the record sits on is plastic rather than metal, therefore more prone to vibration and there is a rather cheap and ineffective felt mat (rather than rubber) on top of the platter. The stylus (needle) is replaceable but is fixed to a ceramic cartridge rather than a MMC (moving magnetic coil) which would have increased the quality (better bass to treble), and the tone arm is fully manual which means it has to be lifted (with the small lever) and lowered onto the record and then lifted off again once the record ends.

Worst of all though is that the whole moving parts (platter and arm) are mounted together on a rather rigidly-sprung unit. Better turntables have these mounted independently.

Setting up and connecting to bluetooth speakers is quick and easy. I paired the player with TIBO 2 x 35W stereo active speakers and tried a range of music styles – orchestral classical to rock with some heavy bass. The sound was reasonable, but not particularly full. Treble and bass were acceptable but the sound tended to stick to the middle tones.

For reference I compared the Jam player with another budget (sub £100) unit, the Audio Technica LP60 using a bluetooth sender connected to the TIBO speakers. The sound was noticeably fuller with much better bass and treble. The LP60 also has all the better attributes (metal platter, rubber matt, MMC cartridge, auto start and return) that the Jam lacked.

I also compared the Jam with a Crosley-style (actually an Akai, but they are all similar) connected via the bluetooth sender to the TIBO speakers. This was noticeably poorer in sound to the Jam, as I would expect considering it cost around £25, but the Akai has an internal lithium battery so is a truly portable self-contained go anywhere player.

If good sound is the requirement, this Jam turntable struggles to keep up with the competition. There are better choices at similar cost. But if reasonable sound and occasional use only are the key factors I would opt for the all-in-one portable players.

It’s great to have such a wide choice of affordable machines on which to play your vinyl records, whether nostalgic for the older generation or retro for the younger, and with careful choice it’s possible to put together a great sounding and budget friendly vinyl player. This one is probably not the best of either of those attributes.

DNY
4.0 out of 5 stars Not the best, but is the cheapest
Reviewed in the United Kingdom on 25 December 2020
Colour: BluetoothVerified Purchase
It is not the best record player money can buy. However, I bought it for that reason. I wasn’t sure whether the novelty of vinyl would wear off compared to a countless library of digital songs available on my devices already. So I didn’t want to spend thousands when this would do.

Setup was super simple and the pictorial instructions are fine. In terms of connecting, at the moment it’s setup to a Sonos five via line in and this works fine. Sound quality is lovely.

Build quality on the other hand is not lovely. This is made from coated mdf and plastic and is already starting to bubble off. It won’t win awards in this department.

When the record comes to an end the player automatically stops and this was a nice feature to have at this price point as some don’t do this. Despite all of its faults, at the price, I just can’t complain. It’s served it’s purpose and I’m glad I didn’t spend any more than this. I’d recommend it for those that don’t have vintage LPs and just want to give it a try.
Read more
Report abuse

Lynsey H
2.0 out of 5 stars Disappointing. Jumps repeatedly.
Reviewed in the United Kingdom on 29 December 2020
Colour: BluetoothVerified Purchase
Bought this for my 17yr old son as he’s started collecting vinyls. Plays older music ok but anything slightly bassy particularly newer music and it repeatedly jumps. Tried help via Amazon live chat but not resolved & tried contacting seller but Amazon don’t make it easy, however when I did eventually get in contact with seller they directed me back to Amazon! Meanwhile an old school DJ looked at it and advised that it needs the weight adjusting for bassier music and unfortunately this player is fixed arm so can’t be adjusted. My son’s main Christmas present so really disappointed. I appreciate it’s not high end but I expected to be able to play a range of vinyls on it not just a select few.
Read more
Report abuse

AJ
1.0 out of 5 stars cheap and tacky terrible build
Reviewed in the United Kingdom on 28 May 2020
Colour: BluetoothVerified Purchase
Do not but this, mine was terrible skipped on every album and is no better parts on the turntable than a briefcase style one, infact they are better, I had one with no problems, when i saw this i could tell its made of cheap parts and wobbles, don't waste your money, for an extra £40 you can get a good one, I chose an audio Technica one , made of good solid parts
Read more
One person found this helpful
Report abuse

Frankie Halliday
1.0 out of 5 stars Bluetooth did not work
Reviewed in the United Kingdom on 16 May 2020
Colour: BluetoothVerified Purchase
To let you know the record player did not connect to my megablast Bluetooth speaker. I contacted jam and they recommended their zero chill Bluetooth speakers. I bought 2 and the record player does not connect either. The only way to make it work is by cable. Not what I was wanting
Read more
4 people found this helpful
Report abuse
See all reviews
Pages with related products. See and discover other items: Top rated in Record Players
Get FREE delivery with Amazon Prime
Prime members enjoy FREE Delivery and exclusive access to movies, TV shows, music, Kindle e-books, Twitch Prime, and more.
> Get Started
Back to top
Get to Know Us
Make Money with Us
Let Us Help You
And don't forget:
© 1996-2020, Amazon.com, Inc. or its affiliates