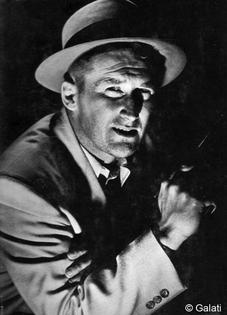 Mickey Spillane is the legendary crime writer credited with igniting the explosion of paperback publishing after World War II through the unprecedented success of his Mike Hammer novels. Spillane's novels sold tens of millions of copies. I, The Jury went through more than 60 paperback printings in 1947 alone. In 1995, he was named a Grand Master by the Mystery Writers of America. Before his death at the age of 88 in 2006, Spillane chose long-time friend Max Allan Collins to complete his unfinished works and act as his literary executor.

Max Allan Collins, Shamus Award winner and 2017 Mystery Writers of America Grand Master Edgar Award winner, is the New York Times bestselling author of fiction, nonfiction and graphic novels, including Road to Perdition, which was adapted into the Oscar-winning film starring Paul Newman and Tom Hanks. He is the author of a number of popular mysteries, including Quarry, which was adapted into a Cinemax original crime drama series. He and his wife also co-author the acclaimed Trash 'n' Treasures cozy mystery series under the name Barbara Allan. In addition to writing, Collins is a filmmaker and created the documentary Mike Hammer's Mickey Spillane. He lives in Iowa and can be found online at www.MaxAllanCollins.com.
Start reading The Bloody Spur (A Caleb York Western Book 3) on your Kindle in under a minute.

Mickey Spillane (1918-2006) sold hundreds of millions of books. He introduced iconic detective Mike Hammer to readers in 1947 with I, THE JURY, and was named a Mystery Writers of America Grand Master in 1995.

tom meszaros
3.0 out of 5 stars “All aboard: troubles comin to town”
Reviewed in Australia on 16 July 2021
Verified Purchase
The third instalment of Caleb York, sees a continuation of the straight-shooter dispensing “ justice: cowboy style”! Not a lot gets past our local sheriff; no wonder the Pinkerton’s were head-hunting him!
Read more
Helpful
Report abuse

PRJ56
4.0 out of 5 stars Everything I look for in a Western is here
Reviewed in Australia on 29 October 2018
ABOUT THIS BOOK: The Santa Fe Railroad wants to build a spur through Trinidad, New Mexico, linking the town to the cattle trade. Only one man stands against it—rancher George Cullen. At the request of the town council, Sheriff Caleb York rides out to the Bar-O to reason with his old friend. Even Cullen’s daughter Willa, Caleb’s former flame, is for the railroad. But the stubborn blind rancher won’t budge.

Cullen’s former partner, Burt O’Malley, has recently returned from a twenty-year stint in the pen for manslaughter. And hired gun Alver Hollis, the much-feared Preacherman, has also shown up with two cronies, claiming they’re in town for the biggest poker game in the territory.

With murder in the wind, the whole town’s in danger. Who will be the next target? To bring a killer to justice, and protect the woman he loves, Caleb York must strap down his Colt .44, enter the big game, and bet his life on the turn of a card... and the speed of his draw.

MY THOUGHTS: I hadn't read the previous two books in this series, but it wasn't necessary. The Bloody Spur stands well on its own. And that's not to say that I won't be going back to read them, because I will.

This is a rollicking good read with all the ingredients of a good western - gunslingers, wild women, card games, fights, greed and corruption. The characters are largely what you would expect - the hard-hitting no-nonsense sheriff and his somewhat stupid deputy, the local madam, the hard-headed rancher, and. ... well, you get the picture.

The Bloody Spur has everything I look for in a Western.

Thank you to Kensington Books via Netgalley for providing a digital copy of The Bloody Spur by Mickey Spillane and Max Allan Collins for review. All opinions expressed in this review are entirely my own personal opinions.
Read more
Helpful
Report abuse
See all reviews

Edward P. Morrissey Jr.
5.0 out of 5 stars The Bloody Spur Delivers The Goods!
Reviewed in the United States on 16 February 2018
Verified Purchase
2018 marks the 100th anniversary of the birth of mystery writer (he hated the term “author”) Mickey Spillane (1918-2006), and some of his works, including several unfinished ones completed by Max Allan Collins, are due to be published this year. First out the gate is the latest Caleb York mystery western The Bloody Spur. Written by Collins based on a never filmed screenplay by Spillane, The Bloody Spur is a fun read from start to finish.

Picking up where the previous novel in the series left off, York, the sheriff of the small but lively western town of Trinidad in the late 1800s, finds himself in the middle of a public dispute. Seems the town fathers want to allow the Santa Fe Railroad to pass through their town & pump up local business, but Bar-O rancher & majority landowner George Cullen (whose daughter Willa is York’s sort-of girl friend) won’t allow the trains onto his land. Adding to that tense situation is a notorious gunman, the Bible quoting Preacherman, coming into town, possibly hired to kill someone, the unexpected return of Cullen’s ex partner who’s free after serving 20 years for manslaughter, an upcoming poker tournament at the Victory dance hall & saloon, and the mysterious death of one of of Trinidad’s leading citizens. York must find out if any or all of these events are connected, before somebody else gets killed.

Collins does a fine job sketching the characters of York and his supporting cast, and manages to give a suitably bloody violent climax at the end. (The Preacherman is somebody you won't forget anytime soon.) Note that two characters from the previous novels are dispatched (one fatally) and that things in Trinidad are going to be a lot different in forthcoming installments. Meanwhile, check out The Bloody Spur!
Read more
5 people found this helpful
Report abuse

jajo
5.0 out of 5 stars That'll do it
Reviewed in the United States on 22 April 2018
Verified Purchase
The Bloody Spur

Reading this book is like stepping into a Frederick Remington painting. The author has carefully created in lush detail, the exacting depictions of the American West and the characters who are just a little larger than life. I’ve read many westerns and the styles vary widely. I also like the sparse approach of Elmore Leonard as well as Louis L’amour’s frontier stories with focus on the family.

The book starts off with a dilemma. Embrace new technology or reject it. The Santa Fe railroad wants to come to town. Their reasons are not entirely altruistic. Expansion is very good for the railroad.

The theme of (inevitable) change is reinforced throughout the story. We find a rancher with no sons whose estate is being run by his daughter. It’s the end of the era for gunfighters too — communication and transport make running and hiding less viable options. And, it’s the end of cattle drives with the trains available to transport the cattle. As one character says, “Civilization is coming to the West, my friends. No getting around it. We must adapt or go the way of the buffalo.”

Caleb North’s character shows his humor, vulnerability and sense of honor as the town’s sheriff, and ex-finance and a key member of the community. He’s quick to point out his own self-interest to those asking his advice. This sense of chivalry reminds me of the knights from tales of Arthur.

I enjoyed the complexity of the main character. He’s a natural leader, though he doesn’t seem to want the role unlike the Barber/Mayor and the rest of the town representatives. They seem to want power without the responsibility.

In contrast to North’s good nature, the ‘bad guys’ aren’t all bad either; just people who made bad choices, mistakes and even misread events.

At the end of the day, this story is about people like us living in the last days of the American frontier west. Collins makes it come to life and I long to have lived in one of these stories.
Read more
2 people found this helpful
Report abuse

Paul.Griffith
5.0 out of 5 stars Caleb York: A New Sheriff in Town!
Reviewed in the United States on 6 February 2018
Verified Purchase
Max Allan Collins is in full stride as he unleashes a real page-turner in this third installment of the Caleb York series. Certainly the best of the three (though they are all excellent). Trinidad Sheriff Caleb York is investigating a murder as the town prepares for expansion in the wake of becoming a major hub for the Railroad. Mystery, suspense, romance, death and intrigue surround this enticing "who-done-it" as the action leaves you breathless. Make sure to have plenty of time to read the novel through as you will find it hard to lay down and walk away from. Collins comes into his own as he takes Mickey Spillane's character to new heights, making Caleb York a rival to Nathan Heller or ever Mike Hammer! I hope to see this series continue as I watch with anticipation for the next release.
Read more
2 people found this helpful
Report abuse

Barbara
5.0 out of 5 stars A winner , highly recommended.
Reviewed in the United States on 22 November 2019
Verified Purchase
This is the first one that I've read in the series and it's the best western I've read in a long time.
I'm looking forward to the rest, starting with book one.
Read more
Report abuse
See all reviews
Back to top
Get to Know Us
Make Money with Us
Let Us Help You
And don't forget:
© 1996-2021, Amazon.com, Inc. or its affiliates