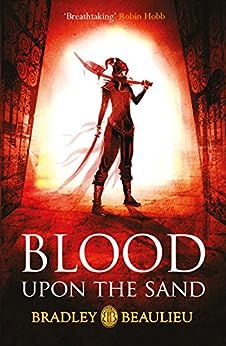 Praise for Twelve Kings in Sharakhai Best Book of 2015 by Amazon - Barnes & Noble - BuzzFeed "Çeda and Emre share a relationship seldom explored in fantasy, one that will be tried to the utmost as similar ideals provoke them to explore different paths. Wise readers will hop on this train now, as the journey promises to be breathtaking." --Robin Hobb, bestselling author of Fool's Assassin "I am impressed.... An exceedingly inventive story in a lushly realized dark setting that is not your uncle's Medieval Europe. I'll be looking forward to the next installment." --Glen Cook, author of The Black Company "Fantasy and horror, catacombs and sarcophagi, resurrections and revelations: the book has them all, and Beaulieu wraps it up in a package that's as graceful and contemplative as it is action-packed and pulse-pounding." --NPR "Beaulieu's intricate world-building and complex characters are quickly becoming the hallmarks of his writing, and if this opening volume is any indication, [this series] will be one of the next great fantasy epics." --B&N SF&F Blog

"Beaulieu has crafted a rich, fascinating world, filled it with compelling characters, and blended them into an epic tale that grabbed my attention on the first page and refused to let go. I look forward to more stories of Sharakhai." --D.B. Jackson, author of the Thieftaker Chronicles "Sumptuous and incredibly entertaining, Beaulieu has created memorable characters in a richly imagined world." --Michael J. Sullivan, author of The Riyria Chronicles "Beaulieu's new fantasy epic is filled with memorable characters, enticing mysteries, and a world so rich in sensory detail that you can feel the desert breeze in your hair as you read." --C.S. Friedman, author of Dreamwalker "A memorable heroine, a poetically told tale of revenge, and superb worldbuilding make Twelve Kings in Sharakhai a splendid read." --John Marco, author of The Eyes of God "Twelve Kings in Sharakhai isn't the same as the last epic fantasy you read. Like the desert sands of Sharakhai, this first volume of Beaulieu's new series is a constantly shifting narrative of betrayal and friendship, loyalty and vengeance. Leave the farm boys to their chickens and the scullions to their pots, because Çeda's bringing a knife to this fight. It's vivid and diverse, full of complex relationships, eye-opening magic, and world building for this new age of fantasy that's broken out of its medieval shackles." --Aidan Moher, A Dribble of Ink "A lavish epic featuring gods, gangs, gladiators and everything in-between. With its deliciously original magic system, vast new world, reckless heroine and sinister array of ageless villains, this is a must for fans of Brandon Sanderson." --Jared Shurin, Pornokitsch "An excellent example of what a fantasy author can achieve when he has a talent for storytelling and has courage to add originality to the story.... The story is full of depth, fantastic scenes, and intriguing characters.... Twelve Kings in Sharakhai may well be the best epic fantasy novel of the year." --Rising Shadow --This text refers to the hardcover edition.

Strong characters and a plot filled with tension and difficult choices make this a good option for fantasy fans - Library JournalIf you are a fan of the epic fantasy genre, you should definitely give this book a chance - The Ranting DragonBradley P. Beaulieu is a welcome addition to the roster of new fantasy novelists - Michael A. StackpoleExactly the kind of fantasy I like to read - Kevin J. Anderson --This text refers to an alternate kindle_edition edition.

Bradley P. Beaulieu is the author of the Lays of Anuskaya Trilogy and Twelve Kings in Sharakhai, the first volume of the Song of Shattered Sands Trilogy. His novels have garnered many accolades, including a Gemmell Morningstar Award nomination. Author Residence: Racine, WI --This text refers to an out of print or unavailable edition of this title.

Second in epic new fantasy series of mystery, prophecy and death within the ancient walled city of Sharakhai, home to the Twelve Kings . . . --This text refers to an alternate kindle_edition edition.

Bradley Beaulieu is the acclaimed author of THE WINDS OF KHALAKOVO trilogy, and has been singled out as a writer to watch, having honed his craft working with authors including Holly Black, Tim Powers and Nancy Kress. He lives and works in the US, and you can follow @bbeaulieu on twitter. --This text refers to an alternate kindle_edition edition.
Read more

4.4 out of 5 stars
4.4 out of 5
167 global ratings
How are ratings calculated?
To calculate the overall star rating and percentage breakdown by star, we don’t use a simple average. Instead, our system considers things like how recent a review is and if the reviewer bought the item on Amazon. It also analyses reviews to verify trustworthiness.

Susan Wallace
TOP 1000 REVIEWER
3.0 out of 5 stars Good read.
Reviewed in Australia on 9 February 2017
Blood upon the sand by Bradley Beaulieu is a sci-fi and fantasy read.
Ceda, now a blade maiden in service to the King's of sharakhai, trains as one of their elite warriors, gleaning secrets as even as they send her on convert missions to further their rule.
Good but slow read with good characters. I managed to read it. Slowly. 3*. I voluntarily reviewed an advanced copy of this book from netgalley.

plot hound
5.0 out of 5 stars An excellent second book.
Reviewed in the United Kingdom on 9 March 2020
Verified Purchase
This continues what the first started with a good pace and twists and turns throughout.

Ceda has grown smarter and more dangerous but we also see the Kings in more detail with their own politics and manipulations.

There is a growing depth and intelligence to the story that draws you in deeper wanting to see what happens next.

The plot is unpredictable without feeling forced and the ending has lots of action and a few extra surprises thrown in.
Read more
One person found this helpful
Report abuse

Ed
4.0 out of 5 stars Good 2nd instalment
Reviewed in the United Kingdom on 16 September 2017
Verified Purchase
I enjoyed the first book and this one picks up right after. Luckily I was able to read straight after finishing 12 Kings. The characters of Céda and Emre captivate most and the most enjoyable part of the book involves the narrative about them. This left me wanting more. I've preordered the 3rd but now have to wait until it's published in March 2018
Read more
Report abuse

B.
5.0 out of 5 stars Brilliant
Reviewed in the United Kingdom on 25 April 2017
Verified Purchase
Brilliant book, a step up from the previous book Twelve Kings; absolutely would recommend it! (I'd recommend reading in the order: Twelve Kings, Of Sand and Malice, Blood Upon the Sand
Read more
2 people found this helpful
Report abuse

kirsty
5.0 out of 5 stars An absolute triumph!
Reviewed in the United Kingdom on 21 March 2017
Verified Purchase
What a second book! I truly didn't think it was possible to beat the first, and it is exceptionally rare for a sequel to outshine the first, but boy oh boy this book is a masterpiece!
I truly cannot wait for book number 3.
Read more
Report abuse

Mina
4.0 out of 5 stars 2nd book of the „Shattered Sands“ series is hard to rate: good protagonist and world, but very drawn out plot. 3.5 stars.
Reviewed in Germany on 11 May 2018
Verified Purchase
Note: this being the second [if counting “Of Sand and Malice made” even the third] book in this fantasy series with one common story arc, makes it a bad moment to jump into the plot. I strongly recommend to start with “Twelve Kings in Sharakai”.

Review
I do like this series and its main character, Çeda, a lot. The same goes for the great world building and the vast history accompanying it, how the kings betrayed one of their own, how the gods have their own, unknown, agenda, how the deeds of the past come back to haunt everyone.

As before, Çeda carries one of the POVs, as do Ramahd, the Qaimiri lord, and Davud, the scholar Çeda knows since childhood. Although I just finished the book [took me long enough…], I couldn’t say, if Emre had a POV, but then, I detest him anyway. Oh, surprisingly king Ihsan’s POV was a good one. But he was the only other than Çeda’s, I liked.

So here’s where my first problem came in: all the men in this story, are real tools. They were either sad cowards, plain cruel or daft. Or a mixture of all three. Ramahd and his sister in law gave me the creeps whenever they had any pagetime [and they had far too much] and really, I hope their kingdom will be taken from them. Reading about the rituals, the machinations, their plain unpleasant personalities and worst of all, hearing Ramahd the coward’s thoughts, made me skim a lot of pages in the end. Thinking of having to read more of them clearly makes me reevaluate my estimation of the series and if I will go on reading it.

Then the new one, Davud, the boring scholar, who doesn’t get any more interesting the moment his life is turned upside down and again, I started skimming pages [and I’m not a skimmer. At all.] out of sheer boredom.

Overall boredom was my second problem. Although Çeda is still a [mostly] interesting character, there are a lot of pages full of her stumbling around at the Maidens’s House, in the city, in some tunnels, wherever. Nothing is achieved, nothing learned, noting really happens. There is no real story for a great length of time and this is why it took me forever to finish this book [it's nearly 700 pages, a bad pacing makes that a lot]. At times, I really shied away from it, because I knew, I’d have to read through more pages of inconsequential stuff. There are a few pretty cool revelations that reminded me of the previous two books’ greatness and a huge battle at the end that was very well written and if not for them, I would have given the book no more than three stars.

Now I’m wary: should I go on with the next book? It’s going to be six main novels after all in this series and books 1 and 0.5 were very good. But I can’t stand the thought of reading more of repulsive Meryam and Ramahd or of boring Davud. So right now, I’m undecided, if I’m going to continue the series and will read a few more reviews on “A Veil of Spears” before deciding.
Read more
Report abuse
Translate review to English
See all reviews
Back to top
Get to Know Us
Make Money with Us
Let Us Help You
And don't forget:
© 1996-2021, Amazon.com, Inc. or its affiliates