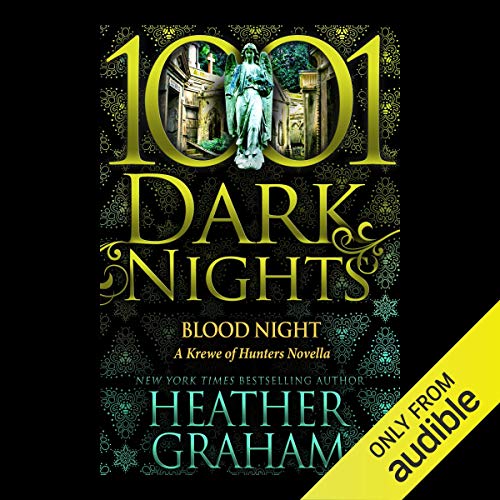 4.7 out of 5 stars
4.7 out of 5
244 global ratings
How are ratings calculated?
To calculate the overall star rating and percentage breakdown by star, we don’t use a simple average. Instead, our system considers things like how recent a review is and if the reviewer bought the item on Amazon. It also analyses reviews to verify trustworthiness.

Trish G
5.0 out of 5 stars Another winner for the Krewe
Reviewed in Australia on 21 July 2020
Verified Purchase
Always a fan of Heather Graham's Krewe of Hunters series, this novella is no exception. This time, it is in the UK and not on home turf in the USA. Andre Rousseau and Cheyenne Donegal have answered a call for help from Cheyenne's cousin Emily when one of the recently murdered bodies ends up on her doorstep. Not able to act in any official capacity, they however are allowed to assist in finding the murderer. I must admit I did have a little trouble keeping some of the characters straight in my head and then realised it was because several started with the same letters. Maybe I need to take notes when I read? Overall however I did enjoy this fast paced novella with it's interesting characters.
Read more
Helpful
Report abuse
See all reviews

A Customer
4.0 out of 5 stars Celebrate All Hallow’s Eve in London with Krewe members and hunt vampires in a cemetery
Reviewed in the United States on 26 October 2019
Verified Purchase
Halloween is coming up fast, so I enjoyed reading this Krewe of Hunters novella. Caveat: if I hadn’t read the “Stalking,” which is book #29 in this series, I might’ve been confused or a bit lost regarding the protagonists—FBI agents Cheyenne Donegal and Andre Rousseau—especially about their relationship and shared history in New Orleans.

The atmosphere is wonderfully evocative of London in autumn, including pea-soup fog, which I have yet to experience. The rather quirky characters are mostly likable and include unconventional Scotland Yard detectives; a sham psychic; a randy banker; an internet media star, and a spiritualist-cum-fake bishop of a “church.”

Unlike most Krewe stories, this takes place in London during the week of All Hallow’s Eve, with hopes that the protagonists live to see All Saints’ Day. Cheyenne and Andre attempt to help the police capture “the Highgate vampire” who hunts, kidnaps and drains his female victims of blood. This is a short read of 114 pages, and although I found the clues that gave up the culprit, I read to the fun end.

annie
5.0 out of 5 stars Spooky Fun
Reviewed in the United States on 26 October 2019
Verified Purchase
When Cheyenne and Andre go to England to help Cheyenne's cousin, after she'd been questioned about a the murder of her boyfriend's ex-girlfriend, they promise to do all they can to help find the truth. After another woman goes missing, the race is on to find. Will they be able to stop the madman in time? Maybe....with a little help from a ghost.

I love both the Krewe of Hunters series and the 1,001 Dark Nights series. Together, they always guarantee a great read.
Read more
2 people found this helpful
Report abuse

Karel Apgar
5.0 out of 5 stars Another Triumph!
Reviewed in the United States on 26 September 2020
Verified Purchase
Another excellent and spooky read by Heather Graham. This involves Cheyenne and Andre from the Krewe of Hunters. Cheyenne has a cousin, Emily, who lives with her boyfriend, Eric, in Highgate in London where they are suspected in the murder of an old girlfriend of Eric's. There have been several murders of women apparently by a vampire an, of course, it is close to Halloween! There is a problem since the Krewe is not invited to work legally in the UK so they are working on their own but have let the police know they are available if needed. There are so many suspects besides Emily and Eric that they interview and are trying to figure out how everyone is involved. It is interesting that Highgate is famous for a very old cemetery and it seems to be the center of action. So are Cheyenne and Andre along with the English police able to solve the crimes before there are any more deaths? I recommend that you read this awesome book!
Read more
Report abuse

LC Rogers
4.0 out of 5 stars Fun mystery
Reviewed in the United States on 25 October 2019
Verified Purchase
Cheyenne and Andre from the famous Crewe of Hunters take a brief sojourn in London to help Cheyenne's cousin and her boyfriend who are suspected of murder. Along the way to solving the crime they meet an interesting assortment of suspects and at least one helpful ghost. The heat level is pretty low, but that's ok because it leaves more room in the story for crime solving. I like this series and the little novellas are great additions.
Read more
One person found this helpful
Report abuse
See all reviews
Back to top
Get to Know Us
Make Money with Us
Let Us Help You
And don't forget:
© 1996-2021, Amazon.com, Inc. or its affiliates