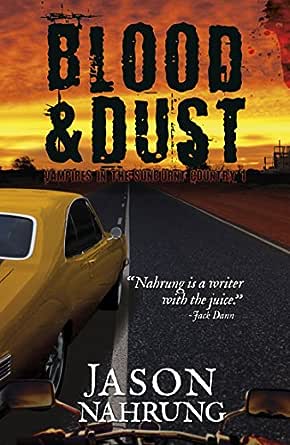 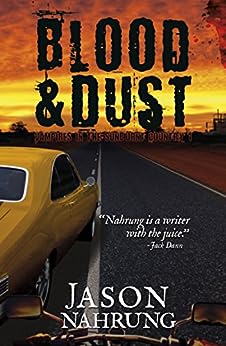 Riaberry
5.0 out of 5 stars Fantastic!
Reviewed in the United Kingdom on 7 December 2013
Verified Purchase
Vampires in the Australian outback! Love it! A great piece of writing with colourful characters. I do hope there is a sequel. For non Australian readers, I would suggest reading the glossary at the back first. This story would make a really good film!
Read more
Report abuse

Patrick Keuning
4.0 out of 5 stars Blood and Dust: A Review
Reviewed in the United States on 18 April 2013
Verified Purchase
I want to start by saying that I really enjoyed this book. However, I want to say right up front that there were some things that I didn’t like. I didn’t enjoy the graphic sex; I also didn’t enjoy the graphic language. I’m sure that I’m most likely in the minority, and it may be argued that they are an essential part of the story, but I could live without it. The thing that is very interesting, to me, is that the graphic violence didn’t worry me. What does this say about me?

I think Jason has done a great job on his vampire mythology. With the rise popularity of vampires have come dramatic changes in the mythology. I my opinion vampires, in many cases, have become too easy. They’ve lost their sense of tragedy and, in many cases, become mere supernatural super beings that just happen to (mostly) have to keep out of the sun and drink some blood. Part of the loss of angst is the divesting of the religious element. It’s not surprising that this has happened, but the loss of the ‘cursed by God’ element really weakened the vampire legend. Many vampires stopped being conflicted cursed beings or total monsters.

Jason has succeeded in bringing back the angst, and did it without any religious elements. He did this with an idea of life streams, which I think is brilliant. The book is full of conflicted cursed beings and some total monsters, which is just great.

This was my first horror novel, although I don’t know if I would call it horror. (More like a supernatural action thriller.) Perhaps it’s the graphic sex and language?;)

Jason Hahrung’s books are all well featured in all the current Australian award nomination lists right now and based on this book he deserves recognition. I want to read more of Jason’s work.
Read more
Report abuse

witchwolf
5.0 out of 5 stars Outback action vamp story.
Reviewed in the United States on 12 January 2013
Verified Purchase
Kevin didn't ask to be a vampire. His father made a life and death choice with a stranger as their bullet riddled service station burnt around them. His father died in the fire but Kevin didn't. Blood and Dust hooked me from chapter one.

The characters draw you in, Kevin and his sense of morality, struggling to survive. I connected with Kevin, he is one of us, a regular person. Bikies, monaro's and fast paced action makes Blood and Dust a 5 out of 5 for me.
Read more
Report abuse

I thought the beginning was a plod but once the first explosion appeared - look out.
Read more
Report abuse
See all reviews
Get FREE delivery with Amazon Prime
Prime members enjoy FREE Delivery and exclusive access to movies, TV shows, music, Kindle e-books, Twitch Prime, and more.
> Get Started
Back to top
Get to Know Us
Make Money with Us
Let Us Help You
And don't forget:
© 1996-2020, Amazon.com, Inc. or its affiliates