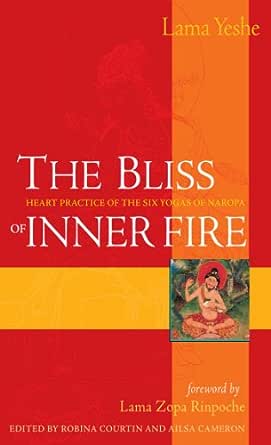 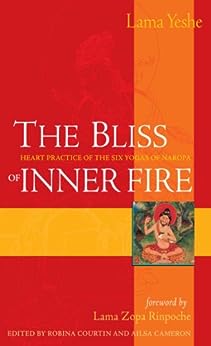 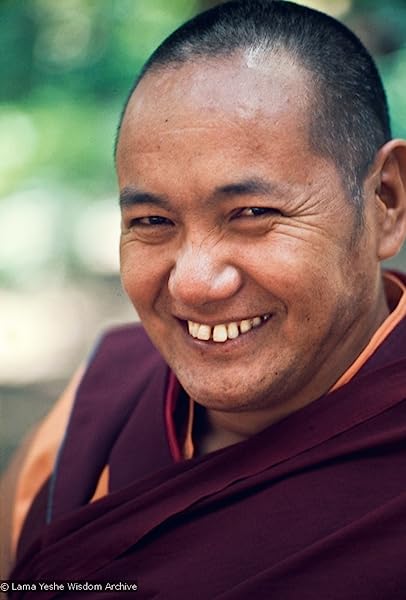 The Bliss of Inner Fire: Heart Practice of the Six Yogas of Naropa Kindle Edition

...an impressive contribution to the growing body of Buddhist literature for an English reading audience.-- "The Midwest Book Review"

A concise yet detailed experiential teaching based on Tsongkhapa's Having the Three Convictions--a guide to the stages of the profound path of the six yogas of Naropa. If you have studied some sutra and tantra, then you will thoroughly enjoy Lama Yeshe bringing them to life.-- "Tibet Journal"

If you are interested in the Gelugpa tradition of Tibetan Buddhism, you shouldn't ignore this book.-- "WildMind Buddhist Meditation blog"

In this work, Lama Yeshe, a renowned Tibetan Buddhist master, introduces the Six Yogas of Naropa and focuses mainly on the first of the six, the practice of inner fire, (tummo) so that students experience inner fire directly rather than merely gain an intellectual understanding of the yogic practice.-- "Tricycle"

Lama Yeshe was capable of translating Tibetan Buddhist thought not only through language, but by his presence, gestures, and way of life. He was a wonderful person who had the unique quality of conveying the true message of the union of compassion and wisdom.--Gehlek Rimpoche, author of Good Life, Good Death

Many years ago I heard a Dharma talk by Lama Yeshe. I was very impressed with his ability to communicate deep truths in very ordinary language, with a hilarious sense of humor that helped deliver such wisdom. But he died, so my attention eventually went elsewhere. Recently, I discovered his books--some very technical Tantra; some down-to-earth wisdom. Lama Yeshe's same gift was present in both modes. Although, my many years of Dharma training is in Theravadin Buddhism, especially the practice of vipassana meditation, I found his teaching once again to be of great value--so direct, so clear. Granted, some of his technical Tantra seemed to me, at first, of limited relevance to my interests. But upon closer reading, and in his hands, these teachings proved equally valuable. Lama Yeshe has given us a body of teaching of immense signifciance for practitioners of all schools of Buddhadharma.--Larry Rosenberg, senior teacher and founder of Cambridge Insight Meditation Center; Senior and guiding teacher, Insight Meditation Society, and author of Living in the Light of Death and Breath by Breath

One of the great teachers of our time.--Sogyal Rinpoche, author of The Tibetan Book of Living and Dying

Wisdom Publications has put out a wonderful series on Tibetan Buddhism. The Bliss of Inner Fire is one of their best.-- "The Review of Arts, Literature, Philosophy, and the Humanities"

In a sense, The Bliss of Inner Fire is like a second Introduction to Tantra, opening up the world of Highest Yoga Tantra's advanced practices the way the earlier work opened up the world of tantra in general.--From the foreword by Jonathan Landaw, author of Buddhism for Dummies --This text refers to an alternate kindle_edition edition.

Lama Thubten Yeshe (1935-1984) was born in Tibet and educated at the great Sera Monastic University. He fled the Chinese oppression in 1959 and in the late 1960s, with his chief disciple, Lama Thubten Zopa Rinpoche, began teaching Buddhism to Westerners at their Kopan Monastery, Kathmandu, Nepal. In 1975 they founded the international Buddhist organization, the Foundation for the Preservation of the Mahayana Tradition (FPMT), which now has more than 160 centers, projects and services worldwide.

Lama Thubten Zopa Rinpoche is the Spiritual Director of the Foundation for the Preservation of the Mahayana Tradition (FPMT), a worldwide network of Buddhist centers, monasteries, and affiliated projects, including Wisdom Publications. Rinpoche was born in 1946 in the village of Thami in the Solo Khumbu region of Nepal near Mount Everest. His books include Transforming Problems into Happiness, How to Be Happy, and Ultimate Healing. He lives in Aptos, California.

Ordained since the late 1970s, Ven. Robina has worked full time since then for Lama Thubten Yeshe and Lama Zopa Rinpoche's FPMT. Over the years she has served as editorial director of Wisdom Publications, editor of Mandala Magazine, executive director of Liberation Prison Project, and as a touring teacher of Buddhism. Her life and work with prisoners have been featured in the documentary films Chasing Buddha and Key to Freedom.

Ordained in 1987, Venerable Ailsa Cameron is a close student of Lama Zopa Rinpoche and has been editing his teachings since 1984. She lives at the Chenrezig Institute in Queensland, Australia. --This text refers to an alternate kindle_edition edition.

4.7 out of 5 stars
4.7 out of 5
124 global ratings
How are ratings calculated?
To calculate the overall star rating and percentage breakdown by star, we don’t use a simple average. Instead, our system considers things like how recent a review is and if the reviewer bought the item on Amazon. It also analyses reviews to verify trustworthiness.

Gerry O'Sullivan
5.0 out of 5 stars an insight into the power and simplicity of meditation
Reviewed in Australia on 24 May 2015
Verified Purchase
This opens up the clear sense that meditation is not mystery or ritual. It shows how just making the effort and following some fairly straight forward visualisations makes it inevitable that you progress along the path of bliss and wisdom. That being said, it not for beginners. The reader should already be travelling on the path, with the correct motivation and intent. Then wonders may well happen.
Read more
One person found this helpful
Helpful
Report abuse
See all reviews

David
5.0 out of 5 stars The most powerful meditation I've ever experienced.
Reviewed in the United Kingdom on 7 October 2020
Verified Purchase
I'm into meditation, and started up the Wim Hof Method many years prior to getting this book.
When I first got into WHM, I researched the history of meditation in cold climates, and the use of extreme cold throughout the ages for remedial purposes, and finally came to Tummo meditation.

I watched many videos and found it very insightful, but none were as in depth as this book, which goes into detail about the origins, context, spiritual and practical uses of Tummo meditation. It makes Wim Hof seem like what Mcdonald's is to burgers... Easy crowd pleaser, does the job, but not meaty enough, or as in-depth.

The book does go into the religious aspects, and includes cultural and religious stories in there, but if you're open minded enough, you'll enjoy the ancient wisdom it all has to offer, in a holistic manner.
And if you're not open minded enough, then just reading them as stories, and using the meditation techniques as simple visual cues to keep you focused and not go to sleep, will still help you greatly.

I can honestly say, after almost a decade of dedicated meditation, this book and the actual steps included, provided me with one of the most powerful experiences I've ever had in my life. I truly went beyond.
Read more
One person found this helpful
Report abuse

Jonathon Blakeley
5.0 out of 5 stars Genius
Reviewed in the United Kingdom on 12 December 2019
Verified Purchase
Sheer brilliance unmatched - clarity of explaining the 6 yogas of Naropa. How to create the ideal Light Body.
Read more
Report abuse

Orsolya Gyorfi
5.0 out of 5 stars Five Stars
Reviewed in the United Kingdom on 6 February 2018
Verified Purchase
A must read.
Read more
Report abuse

Ada0674
5.0 out of 5 stars Brilliant
Reviewed in the United Kingdom on 2 May 2017
Verified Purchase
Simply brilliant. The way Lama Yeshe expresses himself is simple, profund, funny, direct. Loved it.
Read more
Report abuse