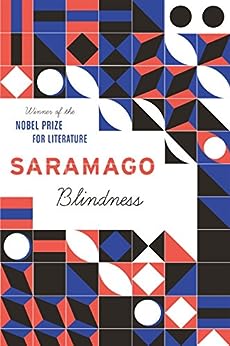 'He writes with luminous intensity...Sweepingly ambitious' The Times

A driver waiting at the traffic lights goes blind. An opthamologist tries to diagnose his distinctive white blindness, but is affected before he can read the textbooks. It becomes a contagion, spreading throughout the city. Trying to stem the epidemic, the authorities herd the afflicted into a mental asylum where the wards are terrorised by blind thugs. And when fire destroys the asylum, the inmates burst forth and the last links with a supposedly civilised society are snapped.

No food, no water, no government, no obligation, no order. This is not anarchy, this is blindness.

'Saramago's most apocalyptic vision of the future yet' Independent --This text refers to an alternate kindle_edition edition.

"This is a shattering work by a literary master...a book of real stature" (Boston Globe)

"Saramago repeatedly undertakes to unite the pressing demands of the present with an unfolding vision of the future. This is his most apocalyptic, and most optimistic, version of that project yet" (Independent)

"He writes a prose of particularly luminous intensity, brilliantly rendered into English by his regular translator Giovanni Pontiero... Sweepingly ambitious" (The Times)

"A powerful fable" (Scotsman) --This text refers to an out of print or unavailable edition of this title.

José Saramago is one of the most important international writers of the last hundred years. Born in Portugal in 1922 in the small rural village of Azinhaga, he was in his fifties when he came to prominence as a writer with the publication of Baltasar and Blimunda. A huge body of work followed, which included plays, poetry, short stories, non-fiction and over a dozen novels, translated into more than forty languages, and in 1998 he was awarded the Nobel Prize for Literature. He died in June 2010. --This text refers to an out of print or unavailable edition of this title.

A chillingly powerful dystopian vision from one of Europe's greatest writers. --This text refers to an out of print or unavailable edition of this title.
Read more

4.2 out of 5 stars
4.2 out of 5
1,347 global ratings
How are ratings calculated?
To calculate the overall star rating and percentage breakdown by star, we don’t use a simple average. Instead, our system considers things like how recent a review is and if the reviewer bought the item on Amazon. It also analyses reviews to verify trustworthiness.

Nadine Dennison
5.0 out of 5 stars Excellent author of quality.
Reviewed in Australia on 11 June 2019
Verified Purchase
I have read a lot of Saramago but this is the most thought provoking and deep one yet. Stayed with me for a long time.
Read more
Helpful
Report abuse

Amazon Customer
5.0 out of 5 stars Absolutely compelling!
Reviewed in Australia on 4 December 2017
Verified Purchase
This is a translation with no conversation punctuation but the narrative is so strong I couldn’t stop thinking about it.
Read more
Helpful
Report abuse

y
2.0 out of 5 stars Format is wrong
Reviewed in Australia on 29 May 2021
Verified Purchase
There are no paragraph breaks at all? This occurred for two books off Amazon that I got.
Read more
Helpful
Report abuse

Paul Phillips
5.0 out of 5 stars A thought-provoking allegory that's also a page-turner.
Reviewed in the United Kingdom on 23 March 2017
Verified Purchase
A good friend suggested that this would be a topical read, as the social stability we've always taken for granted has started to look horribly fragile lately. However, I must confess that the first page, with its unsettling lack of establishing viewpoint and its deliberately odd punctuation, had me thinking that I'd be struggling through a 'worthy but difficult' allegory.

I needn't have worried. Yes, it's a thought-provoking allegory, but it's also a page-turner. The style plunges you into the heads - and the terrifying predicament - of the protagonists. The lack of familiar punctuation to give shape to the sentences and the dialogue, like the lack of names for the characters, is all part of an immersive experience that leaves you, like them, groping around the story, trying to get your bearings, fearful of what you're not seeing and what you're about to stumble onto. And it works. It's like having an intelligent conversation while binge-watching The Walking Dead.
Read more
18 people found this helpful
Report abuse

Roman Clodia
5.0 out of 5 stars 'If you can see, look. If you can look, observe.'
Reviewed in the United Kingdom on 5 October 2020
Verified Purchase
Part dystopia, part abstract philosophising, with thrillerish elements and an existential overlay. At times it is brutal almost to the point of unbearable but we need to remember that it draws on the events of twentieth century history (and beyond).

I like the fact that the white blindness is not easily or simplistically pinned down - at various times, it shifts between being a kind of existential hopelessness, at others a deliberate turning away from looking, yet again it can be turned inward, or even reversed so that loss of self is caused by and equated with other people's lack of seeing.

Saramago's life-long communism briefly appears in the centralised distribution of the food which is more effective and equitable than the free-for-all struggles of individuals but this isn't mere political allegory, and deals with more fundamental issues.

The not-blind doctor's wife is the closest thing to a main character, selflessly confining herself in the hospital in order not to be separated from her husband, and her quiet heroism is subsumed beneath his more overt authority. She is the one who makes some of the hardest decisions which take an emotional toll on her, and it's she who bonds with the dog of tears, an image of compassion and empathy that is, significantly?, not human.

The prose is compulsive, dispensing with punctuation which might slow it down, and also eroding grammatical barriers between voices, allowing individuals to be submerged within a single cacophonous utterance of humanity in all its terror, division, violence and love.

There is cruelty here, exploitation and the abuse of power; we see hierarchies form and be toppled; but there are also images of connection, of charity, and of strength coming from community. And, ultimately, the dog (god?) of tears.
Read more
2 people found this helpful
Report abuse

Pamela Scott
4.0 out of 5 stars Unsettling and bleak
Reviewed in the United Kingdom on 10 December 2018
Verified Purchase
The only other book I’ve read by the author is, The Gospel According to Jesus Christ so I really didn’t know what to expect with Blindness. The two books are very different. I like different. Blindness reminded me a lot of the works of John Wyndham especially his disturbing novel, The Day of the Triffids. I really enjoyed it. I can’t think of anything more terrifying than suddenly, inexplicably losing my sight. Saramago does an amazing job of conveying the terror of those who have lost their sight and describing the gradual decline of society as more and more people lose their sight and chaos descends. Blindness is a dark and intense book at times. I thought it was great. I want to read more of Saramago’swork.
Read more
7 people found this helpful
Report abuse

Ruju
2.0 out of 5 stars Great idea, poorly executed
Reviewed in the United Kingdom on 22 November 2019
Verified Purchase
Blindness is a great idea for a story, an epidemic with a difference. Imprisoning the afflicted in a disused mental hospital and treating them the way the authorities do is genius. Unfortunately, the way it is written is terrible. The entire novel is composed of long sentences and long paragraphs without proper dialogue. There are conversations of a sort, but it is all contained in the narrative without speech marks or line breaks. It soon becomes very tedious. The way the group in the hospital interact initially is fascinating, but the monotony of the writing style soon wore me down. Blindness very nearly got a 1 star rating, but I've begrudgingly given it an extra star because of the great idea.
Read more
3 people found this helpful
Report abuse

LizM
5.0 out of 5 stars A must read!
Reviewed in the United Kingdom on 24 September 2018
Verified Purchase
Just finished this book and know it is one I will never forget. I have lived and breathed it - when I put the book down I felt I was abandoning the characters and could imagine them in there, waiting for me to return! It takes a few pages to get used to the author’s writing style - there are no speech marks and sometimes it is difficult to know who is saying what. However, you soon realise that it doesn’t really matter. An horrific story as well as a heart-warming one. Very well thought out and imagined. A must read!
Read more
3 people found this helpful
Report abuse
See all reviews
Back to top
Get to Know Us
Make Money with Us
Let Us Help You
And don't forget:
© 1996-2021, Amazon.com, Inc. or its affiliates