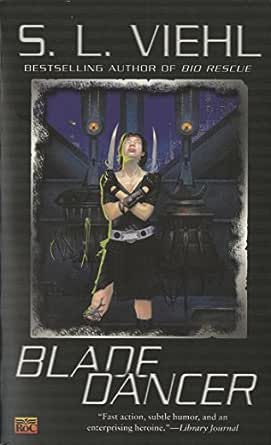 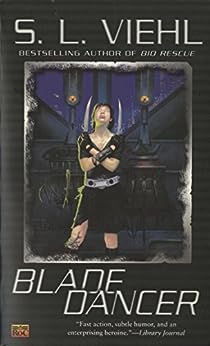 S. L. Viehl was raised and educated in South Florida, where she now lives with her two children. A United States Air Force veteran, she has medical experience from both military and civilian trauma centers. --This text refers to an out of print or unavailable edition of this title.

Devian Ford
5.0 out of 5 stars One of my all-time favorite books!
Reviewed in the United States on 19 September 2015
Verified Purchase
This is one of my favorite books by a very good author. It takes place in the StarDoc universe, so it will help if you've read the first 3-4 in that series, but as a one-off, it works surprisingly well. There are a few predictable moments, as any fan of science fiction will pick up on, but the end, where the main character explains where the whole thing started, came completely out of left field.

The book is written from Sajora's perspective (some call her Jory, some Saj, some just Terran, but her given name is Sajora). She goes to her mother's homeworld to tell her mother's dark secret to the five half-breeds like her. They all decide to seek the vengeance their mothers were denied by becoming blade dancers - terrible and powerful fighters who wield blades as their main weapon. The school becomes a microcosm for the universe at large, and the 6 half-breeds must fight through bullies, war, and famine to become the heroes nobody thought they could be - including themselves.

It has it all - romance, intrigue, war, and just a hint of a badass heroine.

Superbly written, it keeps you on the edge of your seat. Initially, all of the characters seem like tropes - the smart-mouth, the badass, the strong/silent type, the curmudgeon, the weakling, and the Mary-Sue, but they each grow throughout each chapter and get fleshed out into characters you really do root for at the end. If you're looking for a good sci-fi novel, I'd pick this one up any day.

Schtinky
5.0 out of 5 stars Half-Jorenian Jory Rask is a heroine with humor and valor
Reviewed in the United States on 29 September 2005
Verified Purchase
Jory was one of the finest Shockball players on Earth, until it was discovered she was half-Jorenian and kicked off the xenophobic planet. When her mother died, she gave Jory an undertaking; to go to Joren and find the rest of the half-Jorenian children who were the results of the same 'raid-and-ravage' from which she was born.

Including Jory, there are seven half-breeds. Once Jory delivers her message to them, a message of truth, the others decide to join her in her quest. Jory is off to learn how to become a Blade Dancer, the deadliest of assassins, in order to hunt down and kill the biological father that violated her mother so many years ago.

The gang is trained on Reytalon in the Tana, to become Blade Dancers, but in the midst of the tests of strength and endurance, the seven must learn to trust each other also. And even Reytalon is not immune to conspiracy and evil alliances with the warring League and Hsktskt factions. Will what these seven learn at Reytalon be enough for them to avoid the same fate of their parents?

S.L. Viehl is one of my favorite authors. Definitely lighter than most of my other fare, Viehl is always able to bring in tense, taunt situations with realistic and likeable heroines, and create a story that I can literally pour myself into.

Her worlds are extraordinary, her characters so real that I would know them on the street, her aliens imaginative and believable, and her plots thick with action and adventure.

I was introduced to Jorens in Viehl's StarDoc books, and was intrigued to see a darker side of their clannish ways in Blade Dancer. Viehl gave us a little peek at just how stubborn those big blue guys are.

If you liked the 'StarDoc' series, you will love 'Blade Dancer'. 'Blade Dancer' is a good starter book to introduce yourself to Viehl's writing also, though I promise you will be running for more of her work when you finish. Enjoy!
Read more
6 people found this helpful
Report abuse

Elaine C McTyer
5.0 out of 5 stars Awesome!!!!!!!!!!!!
Reviewed in the United States on 25 May 2004
Verified Purchase
I was so surprised at this book. It is great. I reminds me of the Miles Vorkosigan books. With the same pace, action, and wonderful characters.
Jory is half-human, but Earth is so xenophobic all alien,and part aliens are deported, and not considered human. Discovered as she buries her mother, she is despised and battered before being forced to leave earth.
Her mother has given her a quest, and Jory sets out to find her mother's home planet. There she finds predjudice and hatred for half-breeds like herself. Gathering 6 others who have been shunned and separated, she leads them off planet to find a way to get revenge on the slavers who raped their mothers.
They end up on Reytalon, learning to be Blade Dancers, the most feared assassins in the galaxy. They also learn to be a family. There are many trials and secrets to be overcome before we reach the end of our adventure.
This is an exciting, adventure. A wonderful read.
Read more
2 people found this helpful
Report abuse

Genevieve
5.0 out of 5 stars One of my favorites
Reviewed in the United States on 25 November 2017
Verified Purchase
S.L. Viehl neatly ties together several story arcs and subplots to hatch an engaging, thrilling, and intense story. When I try to explainthe plot to others, the flow of Jory's journey from pro-athlete to space assassin is odd to hear from my own mouth but the moment I begin reading, my disbelief is suspended. While it will likely never hit the shelves of the hall-of-fame bookcase, it's a horribly enjoyable read in amd of itself.
Read more
Report abuse

Katherine Ziebold
5.0 out of 5 stars Better every time
Reviewed in the United States on 14 July 2019
Verified Purchase
I can read this over and over again. Plenty of action, thrilling battles, amazing tense relationships. Just a perfect one shot palate cleanser (as much as I would love to read more from the Joren-character perspective)
Read more
Report abuse
See all reviews
Get FREE delivery with Amazon Prime
Prime members enjoy FREE Delivery and exclusive access to movies, TV shows, music, Kindle e-books, Twitch Prime, and more.
> Get Started
Back to top
Get to Know Us
Make Money with Us
Let Us Help You
And don't forget:
© 1996-2020, Amazon.com, Inc. or its affiliates