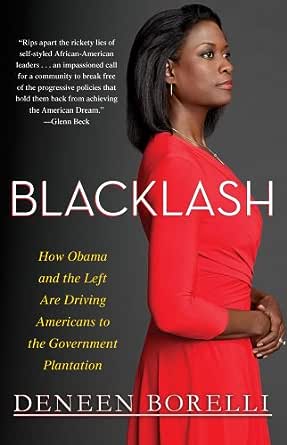 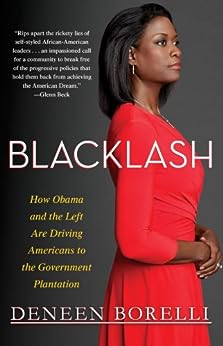 Blacklash: How Obama and the Left Are Driving Americans to the Government Plantation Kindle Edition

Few people have the spine or the character to take on the establishment. Deneen Borelli, fortunately, has plenty of both. BLACKLASH rips apart the rickety lies of self-styled African-American leaders and is an impassioned call for a community to break free of the progressive policies that hold them back from achieving the American Dream. --GLENN BECK --This text refers to an out of print or unavailable edition of this title.

Deneen Borelli is a Fellow with Project 21, a network of black conservatives that is an initiative of The National Center for Public Policy Research, a national public policy group based in Washington, D.C. She is also a Fellow with FreedomWorks and currently serves as an official contributor on the Fox News Channel programs. She has appeared on programs, such as The Glenn Beck Show, Your World with Neil Cavuto, Hannity, and Fox and Friends. Deneen has also appeared on MSNBC, CNN, the BBC, and C-SPAN. --This text refers to an out of print or unavailable edition of this title.

4.5 out of 5 stars
4.5 out of 5
165 global ratings
How are ratings calculated?
To calculate the overall star rating and percentage breakdown by star, we don’t use a simple average. Instead, our system considers things like how recent a review is and if the reviewer bought the item on Amazon. It also analyses reviews to verify trustworthiness.

Azodiac
5.0 out of 5 stars This Book set me Free
Reviewed in the United States on 21 July 2018
Verified Purchase
This book set me free. I was a trump hater until I read this book and have to admit I was wrong about everything. The Liberal indoctrination had me so blind. Now I'm a freethinker who loves America. #Walkaway #Trump2020
Read more
13 people found this helpful
Report abuse

Yer mom
5.0 out of 5 stars with a president doing great things to facilitate minority populations helping themselves
Reviewed in the United States on 13 June 2018
Verified Purchase
A lot of fact-checking and figure-finding went into the writing of this book. It’s one thing to speak in sweeping generalities about policies and effects, but to nail down the very real and quantified impacts makes them more staggering.

Here we are, in 2018, with a president doing great things to facilitate minority populations helping themselves, while liberals use the same old stacked deck, where the next card played is always race.

Lili
5.0 out of 5 stars Logic doesn't elude
Reviewed in the United States on 8 March 2017
Verified Purchase
Deneen is a refreshing viewpoint. Though this book was very relative in the first year of being published, I find that most of the topics can still hit home today in 2017. There is no shock value left out there - we've see the craziest things happen since 2008. In this fast paced world it has never been MORE IMPORTANT to have the ability to cut through all the distraction and get to the matters. Bravo Deneen.
Read more
12 people found this helpful
Report abuse

Kindle Customer
5.0 out of 5 stars Truthful!
Reviewed in the United States on 8 February 2015
Verified Purchase
This was written by someone who is active in breaking the stereo-type of all blacks must be liberal. She has been the bunt of name calling because she is conservative and speaks up. Enlightening of what Deneen has gone through and how tough she is!
Read more
16 people found this helpful
Report abuse

Steven H Propp
5.0 out of 5 stars A CONSERVATIVE ACTIVIST CRITICIZES THE OBAMA ADMINISTRATION
Reviewed in the United States on 25 September 2012
Verified Purchase
Deneen Borelli is a fellow with Project 21, a network of black conservatives and an initiative of The National Center for Public Policy Research. She is a former trustee at The Opportunity Charter School in Harlem, and a television, blog, and print commentator.

She wrote in the Introduction to this 2012 book, "That's why I've written this book. To speak out for what I believe in and to tell the leaders of this great nation what we don't need their handouts, we don't need to be treated like victims and we don't want to live on the government plantation... I want people to hear these messages, but to think and act on their own. I want this book to inspire." (Pg. 15-16)

She states early on, "I don't like Obama because he is doing a horrible job as president... But, some people apparently think that my economic concerns shouldn't supersede my ethnicity... But all white people are not similarly expected to agree with Bill Clinton or George Bush. Nor are all women expected to agree with Hillary Clinton or Michele Bachmann. So why is it that black people---especially black women---aren't allowed to have their own opinions?" (Pg. 4)

She asserts, "We don't need 'equanomics.' The black community needs free market initiatives that would allow competition, grow the economy,and increase jobs, which are badly needed." (Pg. 34-35) She states, "I don't know how we calm the racial tensions Obama's created except to get him out of office." (Pg. 65) Later, she adds, "Clearly, Obama is the government plantation president. As long as we are getting handouts, we are going to be dependent on him and the other political elites who thrive on our inability to better ourselves." (Pg. 79)

She observes, "marriage---not welfare---helps the black American family. The family unit is stronger---both financially and emotionally---if both the mother and father are in the home. Marriage consistently beats poverty, whereas government assistance entrenches dependency. In other words, government aid has contributed to the breakdown of the family." (Pg. 76)

Borelli makes some valid points---although they've been made earlier and in greater detail by other African-American conservatives---and she kind of overdoes the "plantation" metaphor, in my opinion. But her ethnicity (she's married to Tom Borelli, former tobacco exec and current mutual fund manager) and views are making her a popular critic of the administration this election year.
Read more
10 people found this helpful
Report abuse
See all reviews
Get FREE delivery with Amazon Prime
Prime members enjoy FREE Delivery and exclusive access to movies, TV shows, music, Kindle e-books, Twitch Prime, and more.
> Get Started
Back to top
Get to Know Us
Make Money with Us
Let Us Help You
And don't forget:
© 1996-2020, Amazon.com, Inc. or its affiliates