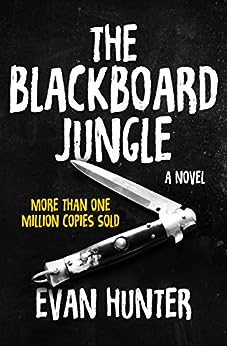 "Shocking . . . Arresting . . . Suspense-packed . . . [The Blackboard Jungle] seems to have been torn raw and bleeding out of [Hunter's] personal experience. . . . It frays the nerves like a scream for help in a dark alley. Like The Jungle and The Grapes of Wrath, this is a book which shouts that SOMETHING OUGHT TO BE DONE." --The New York Times Book Review

"A raw, frightening commentary on a system for which there are no easy correctives . . . A highly dramatic if devastating demonstration of the unequal job of education." --Kirkus Reviews, starred review

"He is a flat-out master of his trade." --Larry King, USA Today
--This text refers to an alternate kindle_edition edition.

Evan Hunter (1926-2005) was perhaps best known for his hugely successful 87th Precinct series, penned under the pseudonym Ed McBain. A recipient of the Mystery Writers of America's coveted Grand Master Award, he was also the first American to receive the Diamond Dagger, the British Crime Writers Association's highest award. Hunter wrote the screenplay for Alfred Hitchcock's The Birds. Evan Hunter's novels have sold over one hundred million copies.

James Patrick Cronin is a classically trained stage actor with an MFA from the University of Louisville and a degree in philosophy from East Tennessee State University. He has performed everything from the classics to original material to comedy sketches in Ireland, Scotland, Serbia, Israel, and throughout the United States. An Earphones Award recipient, he has also recorded over one hundred audiobooks across an extensive range of genres, including science fiction, fantasy, young adult, and nonfiction. --This text refers to the audioCD edition.

Part of the NFT/BFI Film Classics series, this is the story of life in a New York slum school, where young hoodlums develop their crude ways, and their teachers fight a vain and losing battle to bring a semblance of decency and honesty into their lives. --This text refers to the paperback edition.
Read more

Mervyn Hagger
4.0 out of 5 stars THE ORIGINATOR OF THE GONZO APPROACH
Reviewed in the United Kingdom on 23 November 2013
Verified Purchase
Long before someone else took the word 'gonzo' and applied it to a friend in Las Vegas, the author of this book set out to create a story based upon personal experience and turn it into a novel. The novel became a movie and due its association in the credits with Bill Haley, it became identified with the birth of rock 'n' roll as a cultural landmark. Later, in another work, the author used the word 'gonzo' that was misinterpreted by design and it in turn got picked up and adapted and adopted by another writer in Las Vegas. Such is the origin of the 'fear and loathing' that seeped out of that city.
Read more
One person found this helpful
Report abuse

Cine-i-Phil
5.0 out of 5 stars New and well packaged book delivered fast = Satisfied customer
Reviewed in the United Kingdom on 19 April 2016
Verified Purchase
I have seen the movie and I always wanted to read the book.
In a way it is like "To sir, with love" in reverse, the teacher being white in a rough neighborhood.
The book was delivered earlier than presumed date, brand new and in a well made package.
Thank you!
Read more
Report abuse

Jim Lester
4.0 out of 5 stars Top flight commerical fiction from the fifties
Reviewed in the United States on 27 January 2015
Verified Purchase
Back in 1954, this was Evan Hunter's breakthrough novel. He had written a couple of SF novels and a couple of mysteries, but this mainstream commercial novel launched a brilliant career that lasted for over half a century. The novel is a grim story of a young man's first year as a teacher in a New York City vocational high school. (Hunter actually taught in a vocational high school before he became a writer). The school is full of disaffected, often violent boys who have washed out of academic high schools and wound up in a dead end, urban educational cesspool called North Manual Trades High School.

I spent half of my own teaching career in a high school for learning disabled students, many of whom had been tossed out of regular schools and I was amazed at Hunter's right-on-the-money riffs about teaching difficult students. The same thing was true of his portrait of the cynicism and fatalism that overtook many of the long time faculty members. The book was written at a time when high school novels dealt with subjects other than the mistreatment of the nerds by the jocks and sheds light on the plight of young people who are simply not academically gifted and the heroic effort it takes to reach them and teach them.

In many ways the book also serves as a historical document--the slang, the switchblades, even pregnant women smoking and drinking. But at its heart this is a well written commercial novel that features interesting, many-sided characters, a fine story and an insightful look at a dark side of American education. Despite being over 60 years old, the book holds up remarkably well and I would highly recommend it to anyone who enjoys novels that tell a good story while dealing with an important subject.
Read more
11 people found this helpful
Report abuse

Celeste C.
5.0 out of 5 stars As real and rough as it was the first time I read it.
Reviewed in the United States on 30 June 2019
Verified Purchase
Hunter was a prophet as well as an observer. The first time I read this book, I was in junior high, the product of a rigorous academic school system in early-1960s small town America. Having since survived high school and college, and briefly taught in a large public school district, I can say authoritatively that the subplots are somewhat dated, but the main theme is as fresh as today's produce. North Manual Trades has metastasized and now represents a large portion of the American public school system. Hunter's description of the problem is still on target, and this book is a well written indictment of a failing system.
Read more
Report abuse
See all reviews
Back to top
Get to Know Us
Make Money with Us
Let Us Help You
And don't forget:
© 1996-2021, Amazon.com, Inc. or its affiliates