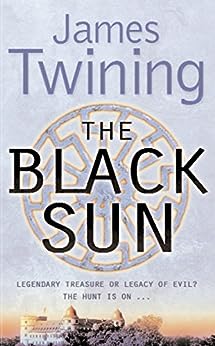 Praise for ‘The Black Sun’

'A story that harks back to the Nazis, Hitler, and a legendary treasure. What more could you want? If there's a better thriller this year I would like to see it' Jack Higgins, author of ‘Without Mercy’ and ‘The Eagle Has Landed’.

Praise for ‘The Double Eagle.’

‘A carefully constructed tale straight out of the Dan Brown mould of thriller writing.’
Sunday Sun

'This would make the perfect Tom Cruise movie.'
The Independent on Sunday

‘A captivating, engrossing debut…a fast-paced tale of international crime and skullduggery written with style and panache. Twining is a worthy successor to Forsyth, Follett, and Higgins. Highly recommended.’ Christoper Reich

James Twining was born in London but spent much of his childhood in Paris. After graduating from Oxford University with a first class degree in French Literature, he worked in Investment Banking for four years before leaving to set up his own company which he then sold three years later, having been named as one of the eight "Best of Young British" Entrepreneurs in The New Statesman magazine. James lives in London with his wife and baby daughter.

4.1 out of 5 stars
4.1 out of 5
32 global ratings
How are ratings calculated?
To calculate the overall star rating and percentage breakdown by star, we don’t use a simple average. Instead, our system considers things like how recent a review is and if the reviewer bought the item on Amazon. It also analyses reviews to verify trustworthiness.

Grahame Woods
4.0 out of 5 stars Enjoyable!
Reviewed in Australia on 11 July 2017
A very enjoyable read. A good storyline - with a plausible historical backdrop - and good action. Enough twists to keep you entertained throughout.
Read more
Helpful
Report abuse
See all reviews

Mairtin
5.0 out of 5 stars Easy to read
Reviewed in the United Kingdom on 16 August 2015
Verified Purchase
Fantastic book would recommend all of James Twining's books if you like your suspense thriller books. Up there with Dan Brown in my opinion.
Read more
Report abuse

Chris
5.0 out of 5 stars Enjoyable and fast paced.
Reviewed in the United Kingdom on 1 September 2010
Verified Purchase
There are reviews here that are quite negative about this book and all I can say is I thouroughly enjoyed it. The author uses plenty of WW2 mystery and suspense which makes for a good read. Sure it is not the most intellectual book out there but then you already knew that - It is however a clever, fast paced and enjoyable book made all the better by it's charectors and setting.
Read more
2 people found this helpful
Report abuse
See all reviews
Back to top
Get to Know Us
Make Money with Us
Let Us Help You
And don't forget:
© 1996-2021, Amazon.com, Inc. or its affiliates