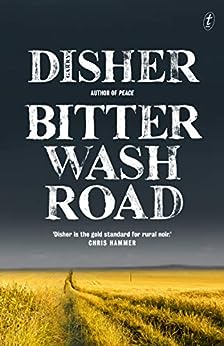 ''Disher has drawn both a vivid and visceral picture of a backblocks bush town, its inhabitants ground down by the stresses of isolation, hard work, and irregular, relentlessly shrinking incomes . . . The story pulls no punches.'' --Guardian (London)

''Trust me, mate: readers will want to make a return visit to Disher's Australia.'' --Christian Science Monitor, praise for the author

''Disher's eye for detail is acute and his poetic analogies precise . . . [Hell to Pay] continues the work of reimagining the crime genre in a very Australian way, and does it beautifully.'' --Sydney Morning Herald --This text refers to an out of print or unavailable edition of this title.

Garry Disher is one of Australia's best-known novelists. He has published over forty books in a range of genres, including crime, children's books, and Australian history. He lives on the Mornington Peninsula, southeast of Melbourne. --This text refers to an out of print or unavailable edition of this title.

A gripping prequel to Garry Disher's Peace, the must-read Australian rural crime novel of 2019. --This text refers to the mass_market edition.
Read more

4.2 out of 5 stars
4.2 out of 5
730 global ratings
How are ratings calculated?
To calculate the overall star rating and percentage breakdown by star, we don’t use a simple average. Instead, our system considers things like how recent a review is and if the reviewer bought the item on Amazon. It also analyses reviews to verify trustworthiness.

Rebecca
5.0 out of 5 stars Another winner
Reviewed in Australia on 2 February 2020
Verified Purchase
Have finally found an Australian author to match my favourite Peter Temple. This is another winner from Disher but a little niggle is that ambulances don’t carry the dead, they must be conveyed by an undertaker,and in Australia an autopsy is usually called a Post Mortem by medical staff.However this is a ripping good yarn with the Australian character and regional attitudes very well portrayed in all their strengths and weaknesses.
Read more
4 people found this helpful
Helpful
Report abuse

jsm
5.0 out of 5 stars Bloody marvellous.
Reviewed in Australia on 29 February 2020
Verified Purchase
Being a fan of thrillers, to discover a new author as good as Garry Disher is wonderful. I have continued to read other books he has written. I highly recommend his books. He describes the heat and dust of the Australian country so well, you feel the same relief as the characters when they down a coldie. And his characters are deliciously real: laconic, laid-back types, often with so much to hide. Keep writing, Mr Disher! Can’t get enough of you.
Read more
3 people found this helpful
Helpful
Report abuse

David A Moncrieff
4.0 out of 5 stars Edgy read
Reviewed in Australia on 3 February 2020
Verified Purchase
I first encountered Garry Disher through his Wyatt novels, as talking books, then as printed books.Since, I've segued to the Victorian police procedurals and have enjoyed them immensely. Bitter Wash Road was therefore keenly anticipated and keenly read. Very engrossing and some nice (nasty) twists in the plot. Have moved on to the next in the series and again enjoying it.
Read more
2 people found this helpful
Helpful
Report abuse

Dog walker
4.0 out of 5 stars Very good Australian cop drama
Reviewed in Australia on 18 April 2015
Verified Purchase
Not quite in the Peter Temple class, but who is? However, this is an extremely well written book that keeps you reading. Great setting, up near the Goyder Line in South Australia. Really enjoyed it - this man can write. Heavens knows we need all the good Aussie crime fiction we can get, anything set in SA is a bonus. Couple of negatives: goes on a bit too long; not enough humour in the dialogue, and I know that the residents of these parts do have that old Aussie wry humour that Temple does so well: also the old Cornish miners in this area were call cousin jacks not Cornish jacks. Also, I can't believe SA cops are quite so universally awful as portrayed in this novel. Minor niggles however, and look forward to reading more books by this author, hopefully including a squel.
Read more
Helpful
Report abuse

Peter Winwood
5.0 out of 5 stars The start of the "Hersh' series
Reviewed in Australia on 26 March 2021
Verified Purchase
A great start to the series that includes "Peace" and "Disillusion'
Ideally must read this one first to give you the indepth backstory of the main character.
Taut and page turning style.

HeatherS
4.0 out of 5 stars Great read with a wonderful sense of of an Australian outback town
Reviewed in Australia on 10 April 2017
Verified Purchase
This is a book about an policeman sent to a tiny town in South Australia. It has a wonderful sense of place and moves along at a great pace. There are plenty of bad guys, crimes to solve and some romance thrown in for good measure.
Definitely a good read and I will try to find more books by this author.

Dragonlady
4.0 out of 5 stars Description is succinct and evocative.
Reviewed in Australia on 22 November 2020
Verified Purchase
I enjoy Garry Disher’s writing style and this particular genre that he writes so well about. I love the way he brings rural Australia alive in all its complexities; harsh beauty, towns that have survived from better days and the characters formed from rural life.
Read more
Helpful
Report abuse
See all reviews

Bluecashmere.
2.0 out of 5 stars Lacks any real energy or individuality.
Reviewed in the United Kingdom on 9 April 2021
Verified Purchase
It has been good to discover much recent fiction of high quality from Australia. Particularly notable finds have been Jane Harper and Chris Hammer. Harper’s the Dry trilogy seems to me an exceptional achievement; her latest, A Treacherous Sea, I look forward to starting shortly. Similarly, Scrublands is a fine read.

Garry Disher is new to me. I felt that Bitter Wash Road had a strong sense of location, but that neither characterisation, nor plot matched either of the two writers mentioned above. None of the characters seemed to me to develop, nor to have any real individuality, including Hirsch. The dialogue, particularly between the police officers, is repetitive; the narrative jogs along generating little in the way of suspense and the ending seems rushed and arbitrary, rather than giving us a really convincing twist. Perhaps this is not Disher’s best work. He seems worth another chance, but I’d certainly hope for more than this.

Craig M Sisterson
5.0 out of 5 stars Masterful crime writing
Reviewed in the United Kingdom on 28 July 2020
Verified Purchase
A brilliant slice of rural crime writing from a masterful storyteller. While the likes of Jane Harper and Chris Hammer have garnered recent accolades for their excellent 'Outback Noir', it is Garry Disher who paved the way and who is the giant on whose shoulders they've stood. BITTER WASH ROAD is an excellent example of his masterful crime writing talents. Highly recommended.
Read more
4 people found this helpful
Report abuse

Almayer
3.0 out of 5 stars very decent stuff although a bit one-dimensional characters
Reviewed in the United Kingdom on 28 October 2020
Verified Purchase
Good entertainment - quite enjoyable stuff but expected more after so many good reviews. However, (i) I do not know Australia and maybe characters portrayed in the book are 'the norm' in this great country; (ii) maybe I am expecting more from Australian crime writes after being introduced to this genre years ago through Peter Temple. His The Broken shore and Truth are (for me) the best crime novels full stop (after Simenon). He shows that it is possible to combine involving intrigue, region-embedded language/dialogs with a remarkable psychological plausibility. Masterclass. So, why not to demand such quality?
Read more
One person found this helpful
Report abuse

Sandra Davies
5.0 out of 5 stars A wonderfully place-evocative stand-alone
Reviewed in the United Kingdom on 10 August 2017
Verified Purchase
Garry Disher - like Peter Temple - is a writer I'm really glad to have come across. Bitter Wash Road is a standalone, but one which lands the reader in the middle of a situation so that, to some extent like Hirsch himself, it is necessary to try and work out what's been going on. As well as the convolutions of the story (which make it well worth a re-read) and the several confrontations, the sense of place is also wonderfully evoked.
Read more
6 people found this helpful
Report abuse

Donny Rock
3.0 out of 5 stars Middle of the review road.
Reviewed in the United Kingdom on 15 October 2020
Verified Purchase
Here is an Australian crime drama where a policeman is 'condemned' to an isolated rural village, almost totally on his own. The plot is good and keeps guesswork going. The characters are good and well drawn . But the narration leaves something to be desired in the editing. Too many avenues are not explored to the end. I also get the impression that not all of the action is accurately timed.
Read more
Report abuse
See all reviews
Back to top
Get to Know Us
Make Money with Us
Let Us Help You
And don't forget:
© 1996-2021, Amazon.com, Inc. or its affiliates