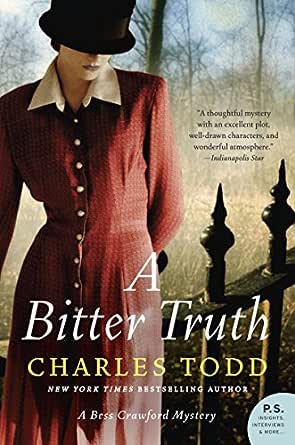 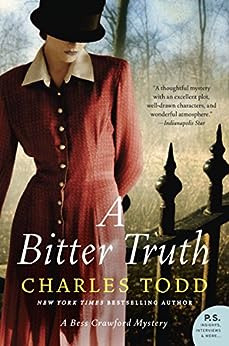 "A smartly plotted, well-told mystery."--Booklist on An Impartial Witness

"A book rich in atmosphere and dense with plot."--St. Louis Post-Dispatch on An Impartial Witness

"Readers will enjoy Todd's plucky, determined sleuth and a thrilling mystery that proves murders on the home front don't stop just because there's a war."--Library Journal on An Impartial Witness

"Bess Crawford is a strong and likable character."--Washington Times on An Impartial Witness

"A superb whodunit--just when you think you have it figured out, Todd throws a curve--and a moving evocation of a world at war."--Richmond Times-Dispatch on An Impartial Witness

"Find some cures for the post-Downton Abbey blues ... Charles Todd has been producing a series of highly praised detective novels set in the years immediately after World War I."--Tulsa World Scene

"Outstanding."--Publishers Weekly (starred review) on A Bitter Truth --This text refers to an alternate kindle_edition edition.


From the Back Cover

When battlefield nurse Bess Crawford returns from France for a well-earned Christmas leave, she finds a bruised and shivering woman huddled in the doorway of her London residence. The woman has nowhere to turn, and, propelled by a firm sense of duty, Bess takes her in. Once inside Bess’s flat the woman reveals that a quarrel with her husband erupted into violence, yet she wants to go home—if Bess will come with her to Sussex.

What Bess finds at Vixen Hill is a house of mourning. The woman’s family has gathered for a memorial service for the elder son who has died of war wounds. Her husband, home on compassionate leave, is tense, tormented by jealousy and his own guilty conscience. Then, when a troubled house guest is found dead, Bess herself becomes a prime suspect in the case. This murder will lead her to a dangerous quest in war-torn France, an unexpected ally, and a startling revelation that puts her in jeopardy before a vicious killer can be exposed.

Charles Todd is the New York Times bestselling author of the Inspector Ian Rutledge mysteries, the Bess Crawford mysteries, and two stand-alone novels. A mother-and-son writing team, they live on the East Coast.

Rosalyn Landor has worked as an actress since the age of seven, both in Europe and the United States. Her extensive list of credits includes leading roles on PBS's Masterpiece Theater, miniseries on all major networks, films, theater, and audio productions. She has received an Audie Award and several AudioFile Earphones Awards, and was chosen by AudioFile magazine as a Best Voice of 2009. --This text refers to an out of print or unavailable edition of this title.
Read more

4.3 out of 5 stars
4.3 out of 5
197 global ratings
How are ratings calculated?
To calculate the overall star rating and percentage breakdown by star, we don’t use a simple average. Instead, our system considers things like how recent a review is and if the reviewer bought the item on Amazon. It also analyses reviews to verify trustworthiness.

MB
4.0 out of 5 stars A Bitter Truth
Reviewed in the United Kingdom on 27 December 2015
Verified Purchase
Bess Crawford is on leave from the front when she stumbles over a woman outside her house. She takes pity on her and learns that the women has been struck by her husband and has fled to London. She slowly gain the woman's trust and learns that her name is Lydia and that her husband's name is Roger. Bess agrees to travel with her home to her house in the country. But this act of kindness will result in quite a lot of trouble as everyone in the household inclusive Bess will be suspected in a murder case.

Once again has Charles Todd written an engrossing historical novel with where Bess en up having to find out the truth. She must try to figure out why anyone would kill a houseguest, but this time, even she is a suspect. Prior to the man's death has he asked Roger at dinner about a child that looked like Julianna, Rogers little sister that died when she was just 6 years old. But who is the child in question and could that simple question really be the reason for his death?

Ad much as I enjoyed the book and the mystery was I also a bit puzzled why it all had to be such a hush-hush thing. When the truth finally was revealed about the child was not that overly surprised, I would have liked a more interesting and perhaps surprising mystery than that. I felt that the family mourning of Julianna was frankly a bit over-the-top sometimes that it could affect the present time that much. Yeah, it was tragical, and yeah she was a beautiful child. But sometimes the truth could perhaps save some heartache and time. Still I enjoyed finding out the truth even though it was a little let down that it wasn't that complex.

But the murders is all whole other story, I failed to realize who the murder was. It wasn't until Bess and Simon Brandon realized who it was and then everything made sense.

One thing that really pleased me (and confused me) was that Sergeant Lassiter Larimore has finally made his first entrance in this book series. I am a bit confused about the name of him since I read about him A Pattern of Lies where he was Sergeant Lassiter, but here is is called Sergeant Larimore. Could there really be two different Aussie Sergeants with the same trademark Kookaburra laughter?

I just have to read on to figure it out...
Read more
Report abuse

H. Lacroix
4.0 out of 5 stars I liked this one a little less... but I still read it in just over 24 hours...
Reviewed in the United Kingdom on 15 April 2013
Verified Purchase
This is the third Bess Crawford mystery I've read and it's the one I least enjoyed. But let me qualify what I've just written. It still took me just over 24 hours to read it, I still found it difficult to put it down and compared to other books I have read I would still rank it higher in terms of interest and appeal. It by no means fails I just found it slightly less absorbing than the two others I've read so far. As always the exposition scenes are excellent and capture your interest right away. Maybe following on 'Duty to the Dead' and finding Bess once again among a family in mourning I found it less original than ' an unmarked grave' which was also the first book of the series I came upon. Not taking to the character of Lydia might also explain why I found this one less compelling. Lydia is impeccably drawn but as her character develops and as we realise how selfish, manipulative and uncaring for Bess's wishes she is, it gets more difficult to feel any sort of compassion for her and one is left to wonder why Bess should do so much as it is obvious that she sees through her rather quickly once both the young women find themselves at Vixen Hill. I also found the identity theft story at the end rather contrived and as usual found the ending rushed and implausible. I have found it so in all the books by the Todd team I have read and once again when comparing the quality of the beginnings to the hurried and often rather unsatisfactory endings it is as though each one had either the end or the beginning to write. I doubt that the mother and son team do it this way but however they choose to write it would be good if the same care could be given to the concluding part of the stories as is given to the opening chapters. I do realise that once you have been hooked you won't give up reading twenty pages before reaching the end but I still think that some effort should be made so that the reader ends up fully satisfied and eager for more.
Read more
One person found this helpful
Report abuse

Gaye Sissons
5.0 out of 5 stars Very glad there are more in this series
Reviewed in the United Kingdom on 5 February 2015
Verified Purchase
I find WW1 hard to contemplate because the tragedy of it is just so huge. These books tell a good story about investigations, with everyday information about what happened behind the front and in Britain just part of the tale. They earn my biggest compliment because they are 'you are there' books.
Read more
Report abuse

Amazon Customer
4.0 out of 5 stars Four Stars
Reviewed in the United Kingdom on 10 January 2015
Verified Purchase
As I am a Maisie Dobbs fan I enjoyed this book
Read more
Report abuse

SusieQ
3.0 out of 5 stars Three Stars
Reviewed in the United Kingdom on 15 September 2014
Verified Purchase
no clear recollection
Read more
Report abuse
See all reviews
Get FREE delivery with Amazon Prime
Prime members enjoy FREE Delivery and exclusive access to movies, TV shows, music, Kindle e-books, Twitch Prime, and more.
> Get Started
Back to top
Get to Know Us
Make Money with Us
Let Us Help You
And don't forget:
© 1996-2020, Amazon.com, Inc. or its affiliates